Press freedom advocates have been calling for Yesypenko’s immediate release 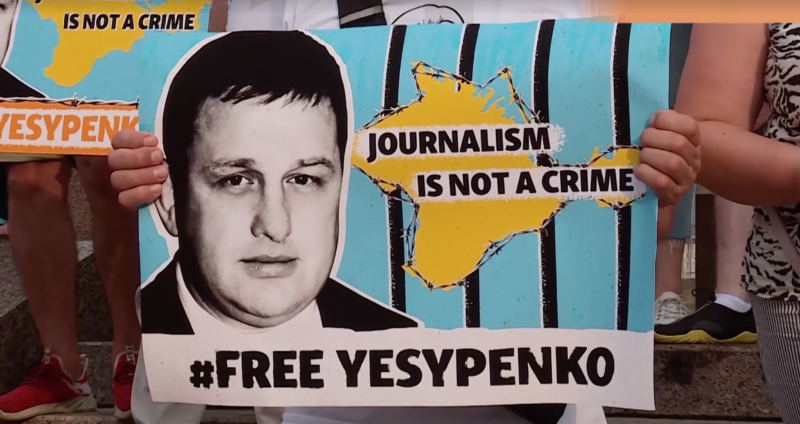 A Russia-imposed court in the city of Simferopol in occupied Crimea has sentenced Vladyslav Yesypenko, a freelance journalist with Radio Free Europe/Radio Liberty, to six years behind bars. Yesypenko had previously been charged with alleged possession and transporting of explosives, a charge he has roundly rejected.

The Simferopol City Court handed down the sentence on February 16 after a closed-door trial which was not open to the press. The prosecution had initially asked the court to sentence the journalist to 11 years in prison.

During the court hearing on February 15, Yesypenko testified that the Russia-appointed Crimean authorities “want to discredit the work of freelance journalists who want to show the things that are really going on in Crimea.”

Yesypenko, who is a dual Russian-Ukrainian citizen, had been working in occupied Crimea for over five years and had regularly contributed to the RFE/RL online project Crimea.Realities which covers daily life on the Crimean peninsula. The journalist was detained in Crimea in March 2021 on suspicion of collecting information for Ukrainian intelligence. While in detention, Yesypenko has reportedly endured torture at the hands of Russian federal security services and Crimean law enforcement.

Dozens of other independent journalists, writers and creatives working in Crimea and occupied eastern Ukraine have faced similar pressures, with some imprisoned and many pushed out into exile.

Yesypenko's case was the focus of last year's Empty Chair Day campaign, organised by PEN America in November 2021 in support of Ukrainian writers and journalists imprisoned for their writing or speech in the occupied territories of Eastern Ukraine and Crimea.

Ukrainian Ombudswoman Lyudmyla Denisova condemned the court sentence, calling the case against Yesypenko “fabricated.” “… the accusations against the Ukrainian citizen are trumped up and politically motivated,” she said on Telegram, demanding Yesypenko’s immediate release.

Denisova also appealed to the international community and human rights defenders to continue to keep an eye on the “systemic violations of the rights of Ukrainian citizens on politically motivated charges by the aggressor country.”

Press freedom advocates such as the Committee to Protect Journalists and Reporters Without Borders, along with state officials such as Ukraine's Foreign Minister Dmytro Kuleba and the U.S. State Department, have been calling for Yesypenko’s immediate release in the absence of any evidence of wrongdoing or grounds for his detention.

Other media rights groups, along with the international Media Freedom Coalition, have been calling for the release of all media workers imprisoned in illegally occupied Ukrainian territories, condemning Russia’s and pro-Russian authorities’ efforts, ongoing since 2014, to stifle independent print and broadcast media activity in Crimea and occupied parts of Donbas.