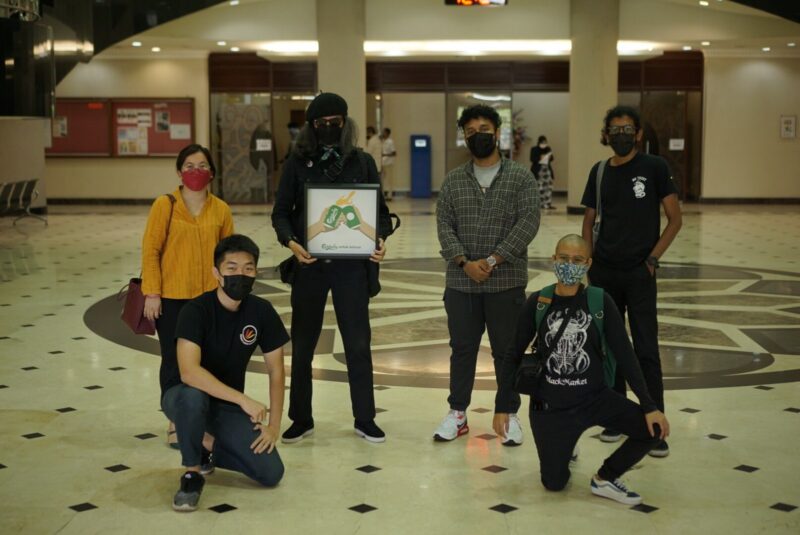 Free speech advocates express solidarity with Fahmi Reza. Photo from a Twitter post by the Centre for Independent Journalism. Used with permission.

Malaysian graphic artist Fahmi Reza was summoned by the police in January 22 and was slapped with two charges this month for publishing posters that mocked authorities on social media. Rahmi has already paid MYR 8,000 (approximately USD 2,000) in bail this year. Human rights groups have decried the police probe and the filing of charges against Fahmi as a reflection of the shrinking space for freedom of expression in the country.

On 25 January, Fahmi was summoned by the police and made to give a statement over a complaint against a poster he had made which modified the coat of arms of the Malaysian state of Pahang, which was heavily flooded in December 2021. The flash flood was blamed on rampant logging in the state, and Fahmi’s poster featured a tree and two axes with an inscription that read “House of Balak.” Balak means log or timber in Malay.

On 10 February, Fahmi was charged under Section 233 of the Communications and Multimedia Act (CMA) for a 2021 poster caricaturing the country’s former Health Minister. The poster was satirizing the Minister’s decision to shorten the COVID-19 quarantine period for Cabinet Ministers returning from abroad on official visits.

Section 233 of the CMA “criminalizes speech with the intent to annoy, abuse, threaten, or harass another person, including anonymous communications.”

On 17 February, Fahmi was slapped with another charge under the same law for a different poster which mocked the June 2021 order by the Ministry of Trade and Industry to allow alcohol production during the COVID-19 lockdown despite the regulation that only “essential services” were allowed to operate. Malaysia has a Muslim majority population.

Fahmi wrote a defiant tweet after posting bail for the second time this year:

I'm out on bail! One shouldn't be afraid to stand up for our right to freedom of expression because it instills courage in others to stand up with you. They can jail a rebel, but they can't jail the rebellion. #SatireIsNotACrime pic.twitter.com/WD7r9zEZMt

Nalini Elumalai, senior Malaysia program officer of ARTICLE 19, urged the government to stop what she described as a “witch-hunt” against Fahmi:

The government’s use of retaliatory criminal charges in an attempt to intimidate Fahmi Reza only succeeds in exposing their malicious witch-hunt against him. Their campaign of harassment and criminalization of expression must stop.

The Centre for Independent Journalism (CIJ) reminded authorities that satire is a protected form of expression:

Gov leaders must learn to take public criticism and dissent in stride and stop going after critics like #FahmiReza for poking fun at them. Uphold our freedom of expression!

ARTICLE 19 and CIJ are among the groups which have been pushing for the review and repeal of “draconian” laws like the CMA.

Opposition lawmaker Lim Guan Eng cited Fahmi’s case to warn against the rising attacks on the right to freedom of expression under the new government:

Clearly the public space for criticism and freedom of expression is slowly but surely disappearing under an extremist regime that has no regard for democracy and the dangers of corruption.

This is not the first time that Fahmi has faced harassment for his online work. He was threatened by authorities in 2016 for posting clown memes mocking the country’s former Prime Minister Najib Razak, who was embroiled in a corruption scandal. And he was detained for one day on April 23, 2021, after the police received a complaint over a satirical Spotify playlist ridiculing Malaysian Queen Azizah Aminah Maimunah Iskandariah. 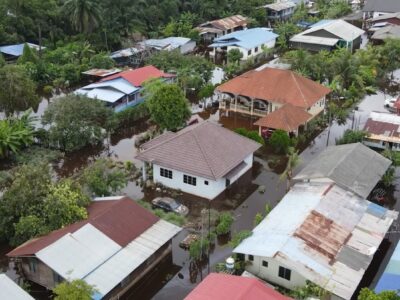