There is no balanced view or reference to other analyses

This analysis by Prof. Mirjana Najchevska, an expert on the rule of law and human rights, was originally published by Truthmeter.mk. An edited version is republished in two parts by Global Voices as part of a content-sharing agreement.

One of the simplest ways to influence a wider number of people is to glorify a country. This can evoke admiration, a sense of belonging and community, a sense of protection, an ever-present refuge, an alternative available to citizens and the state. This is especially possible in times of stunted development, unfulfilled expectations, or dissatisfaction with the speed with which things are moving, in this case, North Macedonia's accession negotiations with the EU.

Demonstrating the power of a state can refer to cultural, scientific, or some other type of power, but it is most striking when it corresponds to the emphasis on military power. This segment of possible influence is interesting and catches the eye when analyzing the influence that Russia has in the Republic of North Macedonia. 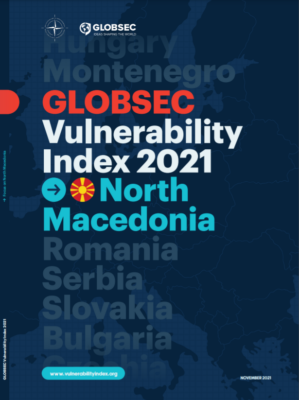 Cover of the GLOBSEC Vulnerability Index 2021 for North Macedonia

In general, North Macedonia is not too exposed, nor is it under any visible and strong influence of Russia. Regular monitoring of the vulnerability of the country from this kind of influence by the think tank GLOBSEC from Bratislava shows that North Macedonia is moderately vulnerable and that it has mechanisms that manage to deal with it.

Fascination with Russia’s power exists and is transmitted both through the formal media and, moreover, through social networks and websites, but it is difficult to quantify and measure.

This is influenced by several factors.

First, analytical and investigative journalism is not developed in the country, but rather, copying and republishing news/information/analysis from other, mostly foreign media is practiced. Considering that even in this transmission the media from which the text is being republished are not quoted, and even less often links are given to the specific texts, one can only assume from which source certain news/information is taken according to its content.

Second, there is a tradition of listening/watching/reading media coming from the neighboring Republic of Serbia. It is very difficult to determine the extent of citizens’ exposure to these media (many of which are very positive and non-selective when it comes to transmitting information related to Russia and its military power). The situation is worsening with the purchase of some of the media in North Macedonia by Serbian owners. If this is put in the context of the analyses that indicate the great influence of Russia in the Serbian media, a conclusion can be drawn about that influence in North Macedonia, as well.

Third, social networks are an important source of information that is difficult to quantify. Trust in media outlets whose source cannot be verified is significant and unequivocally dangerous. Precisely because of the most informal way of conveying information, views, opinions, it is not easy to assess the level of impact it has on a wider circle of people.

What can be deduced from the analysis of the media in North Macedonia is that Russia’s military power is talked about in a way and in a quantity that cannot be found in any other country. The one-sidedness of the information is emphasized by the fact that in the media there are no relevant measurements and data from which one can see the military power of individual countries/alliances. 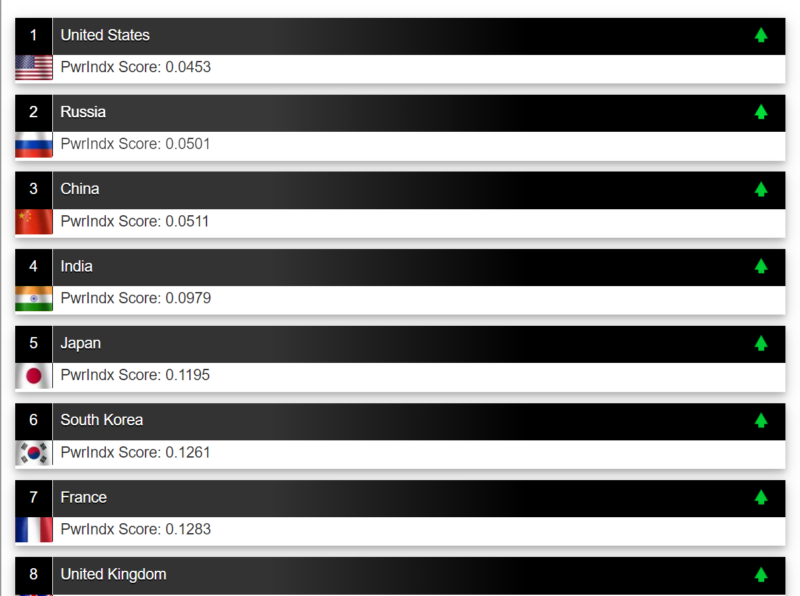 Illustration: List of countries by military power according to GlobalFirepower (GFP).

This fascination (in the way it is portrayed in the media) may or may not correspond to factual data (given that very few articles point to relevant data or sources for certain claims). In any case, the media are not opposed to different sources of data.

In some articles, the absence of sources and relevant data is replaced by giving details of specific types of weapons and/or armaments that should create the impression of relevance and knowledge. For example, one such article is entitled “A Killer Carrier Will Make Russia a Powerful Hypersonic Force,” which provides a very detailed account of the “new” weapons being developed by Russia. Or “Russian S-350 anti-aircraft systems coming to Crimea soon,” and “Kaliningrad Fortress: The Russian army is rapidly forming a powerful division to defend important enclaves.”

Some of the articles are structured in such a way that at first glance seem to send a message of concern (about Russia’s military power), but in a number of such cases, the entire text radiates admiration.

Usually, Russia’s military power is not part of a broader or more in-depth analysis, the mention is often made out of context (related to an event – celebration, maneuver, statements by senior Russian government officials) and has no comparative elements or balanced representation of the military power of other states. 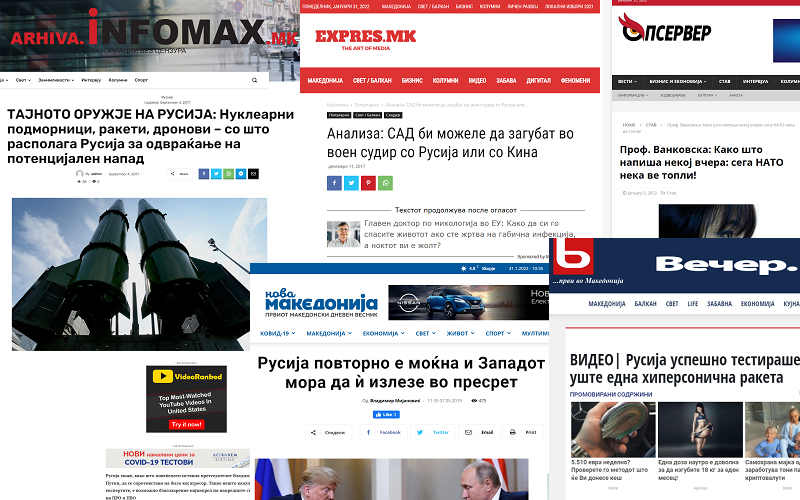 Collage of screenshots of articles from Macedonian online media outlets glorifying Russian weaponry and might. Headlines include: ‘RUSSIA's SECRET WEAPON: Nuclear submarines, rockets, drones — what Russia can deploy to avert a potential attack,’ ‘Analysis: USA could be defeated in  military conflict with Russia and China,’ ‘Prof Vankovska: … let NATO provide heating now…,’ ‘Russia is powerful again and the West must meet its demands,’ ‘Video: Russia successfully tested another hypersonic rocket.’ Illustration by Truthmeter.mk, used with permission.

Even when the media refers to an expert or specific analysis undertaken by other media, it is very rare to provide a link that would verify their original form. In any case, there is no balanced view or reference to different analyzes (some praising Russia’s power and its readiness to defeat the United States, and others claiming the opposite).

The small number of serious analyses of the distribution of military power in the media of North Macedonia give completely opposite data (about military power and powerlessness, but even more about the economic situation in Russia) on those spread by portals and media that fuel the fascination with the military power of Russia.

Information about Russia’s military power is mostly part of the news transmitted through social networks, but it is not uncommon for it to find a place in established print and electronic media. Part of that trend is the oldest newspapers in North Macedonia such as Nova Makedonija with articles entitled “Russia is powerful again and the West must oblige” and Vecher with “VIDEO | Russia successfully tests another hypersonic missile.”

Sometimes it is indirect messages related to the sale of weapons to neighbors or “friends” or simply an attempt is made to achieve an appropriate effect with a disparaging attitude towards NATO.

In this sense, the choice of terms used to describe Russia’s military power is also interesting. For example, it talks about “All the power and beauty of the Russian army in one video: The Russian military TV channel broadcasts a spectacular video”:

The video was prepared by the team of the TV channel “Zvezda”. It shows the mastery of Russian military pilots, tankers, paratroopers, artillerymen and machine gunners. Scenes from the launch of Caliber rockets from ships, as well as scenes of attack by attack helicopters and target-launching aircraft, are shown. The scenes with the take-off of the strategic bombers Tu-160 ‘White Swan’ deserve special attention.

This is the first part of the report. Read the second part here.