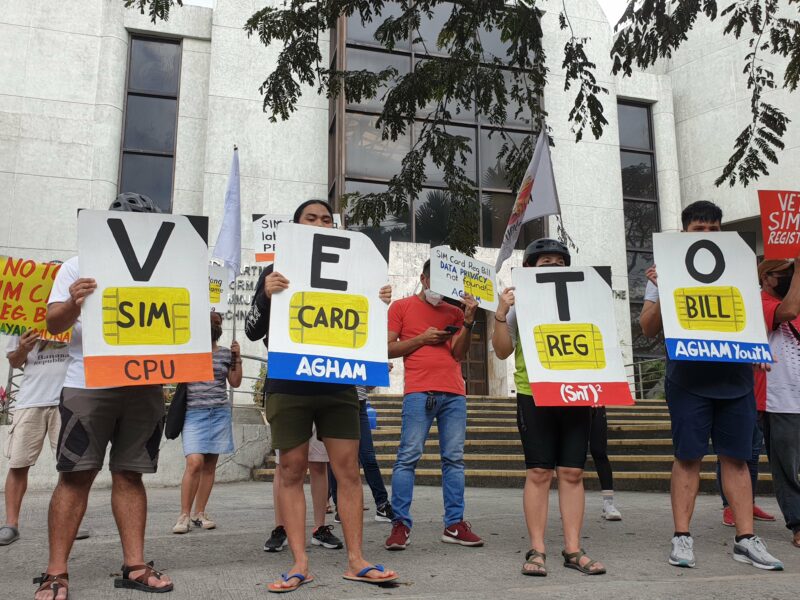 Groups rally in front of the Philippine Department of Information and Communications Technology in protest against the Sim Card Registration Act. Photo from the Twitter post of AlterMidya.

This article is from EngageMedia, a non-profit media, technology, and culture organization. This has been edited and republished here as part of a content-sharing agreement with Global Voices.

In the Philippines, an act mandating the registration of SIM cards and disclosure of personal information for social media accounts has lapsed into law despite widespread opposition from rights groups and privacy advocates. Introduced to “deter the proliferation of SIM card, internet or electronic communication-aided crimes,” the measure poses significant threats to privacy and free expression.

Under the SIM Card Registration Act, Filipinos are required to provide their personal information before buying and activating SIM cards. The act also includes a provision on social media account registration, stating that “all social media account providers shall require [the] real name and phone number [of a user] upon creation of account.”

The Philippines now joins a growing list of countries adopting similar laws. Deterring crime is invariably the stated goal of such measures, but the experience of other countries suggests otherwise. According to Privacy International, SIM card registration is “costly, intrusive” and has not proven to be effective in curbing crime. Additionally, digital rights advocates and cybersecurity experts point out loopholes that enable criminals to circumvent restrictions and facilitate the emergence of black markets.

Despite its intentions, the law does not offer real solutions to security issues and instead poses serious risks to digital safety, privacy, and free expression. Paired with the controversial Anti-Terror Law and the continuing harassment of activists and civil society groups in the Philippines, the SIM Card Regisration Act could further worsen the already shrinking civic spaces in the country, threatening the privacy and safety of Filipinos.

How does the SIM Card Registration Act threaten digital rights?

The law contains a provision requiring the use of real names and phone numbers in creating social media accounts. Those who use “fictitious identities” could be penalized with fines or prison time. Such a requirement prevents people from exercising their right to anonymity protected under the International Covenant on Civil and Political Rights, to which the Philippines is a party. Restrictions on anonymity also pose a chilling effect on constitutionally-protected free expression. Without the additional security provided by anonymity, whistleblowers and human rights defenders may be at risk, especially when divulging information deemed critical by authorities. Ordinary citizens may feel unsafe expressing their personal opinions and beliefs online. For the LGBTQ+ community, the law essentially forces them to use their “dead names” to avoid imprisonment.

Additionally, under the SIM Card Registration Act, personal information collected from SIM card users will be stored on a centralized server, potentially becoming a target for cyberattacks. This “SIM card register” contains users’ personal information (such as full name, date of birth, and address) and can only be used by public telecommunication entities to process, activate, or deactivate subscriptions. However, cybersecurity experts warn that ensuring the security of a central database “cannot be guaranteed.”

Also, due to its massive trove of data, the SIM card registry could become a tool for mass surveillance. Any Filipino SIM card user can be the subject of surveillance, potentially endangering whistleblowers and activists. Prior to the law, human rights defenders have already reported monitoring and surveillance of their online activities by the police. The law, when coupled with other measures that restrict free speech, such as the controversial Anti-Terror Law, “would only legalise invasion and surveillance by the authorities.”

Who has spoken up?

Before the measure lapsed into law on March 4, various digital rights advocates, tech groups, and civil society organizations sounded the alarm over the law’s vague provisions and high potential for abuse:

In an earlier call urging President Rodrigo Duterte to veto the measure, the Foundation for Media Alternatives released a statement citing the “serious threat it poses to human rights, particularly the right to privacy and free expression.” As of posting, 45 organizations and individuals, including EngageMedia, have supported the statement.

The Asia Internet Coalition, an industry association for internet and technology companies in the Asia-Pacific, submitted a letter to the government raising security and privacy concerns over the law. The coalition noted that the move puts vulnerable groups “at risk of tracking and targeting, increasing the chances of their private information being misused.”

The Computer Professionals’ Union created a Change.org petition against the measure, saying its provisions “offer no real solution to these problems and only limit our right to privacy and expose us to risk by consolidating personally identifiable information on a centralised server.”

LGBTQ+ rights group Bahaghari also joined the call against the measure, in particular slamming the real-name registration requirement for its detrimental impact on the queer community:

Cruelly, the SIM Card Registration Act will also criminalise transgender people and other members of the LGBTQ+ community, many of whom choose a lived name in place of their legal name as an important part of their gender expression.

As the measure has now lapsed into law, digital rights groups are continuing advocacy campaigns to raise awareness on the dangers of the law while urging the Philippine legislature to repeal or amend the act:

The International Commission of Jurists (ICJ), along with EngageMedia and nine other human rights organisations, are calling on the Philippine legislature to repeal or substantially amend the act, citing the “grave risks” of the “fatally flawed” measure:

While we acknowledge the need to curb fraud and other crimes, we urge the Philippine authorities to do so in a manner that respects and ensures the rights to privacy, free expression and information, association and non-discrimination.

The UP Internet Freedom Network, an alliance of students and volunteers advocating for internet freedom, is collaborating with other organizations to continue the campaign against the measure and explore other avenues to protect privacy rights.