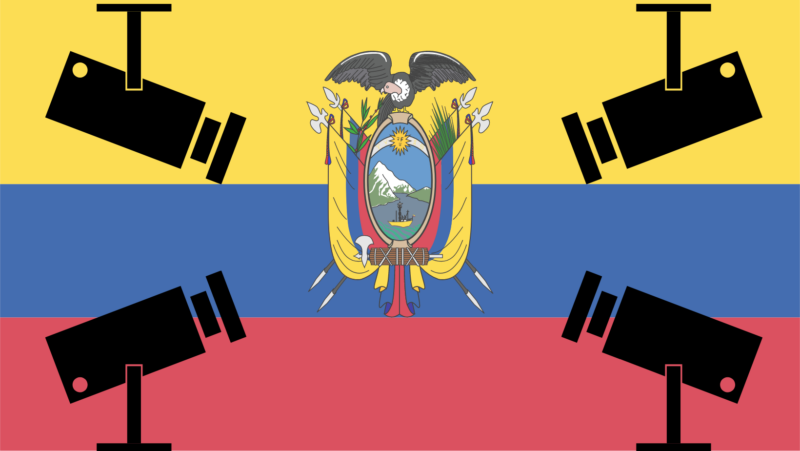 In the current government of Guillermo Lasso, who took office almost a year ago, there have yet to be journalistic reports on video surveillance practices in Ecuador. However, a recent report by the non-governmental organization Access Now focuses on massive video surveillance trends in Latin America, including a chapter on this country.

The report highlights the opacity of the Ecuadorian State regarding the use of facial recognition technologies and their acquisition from international companies, as well as the lack of legal frameworks to regulate surveillance. It also questions the narrative that mass surveillance is useful in the fight against crime.

In April 2019, then-Ecuadorian President Lenin Moreno said that the ECU 911 Security Service, an immediate response service for national emergencies, was perversely used for acts of espionage during the preceding government, that of Rafael Correa. Moreno stressed that these types of practices were no longer part of his government, an issue about which his minister of the interior, María Paula Romo, remarked, “People's access to information is only used for security purposes.”

Anaís Córdova was part of the Access Now research team with LaLibre.Net, a community technology organization, for the section that corresponds to Ecuador. The following interview with Córdova has been edited for clarity.

Carlos Flores (CF): What results did the investigation yield in the case of Ecuador?

Anaís Córdova (AC): The first thing constantly argued is that video surveillance and all the surveillance systems of the ECU 911 — that is, of all the integrated systems that carry out surveillance in Ecuador — generate security. One of the clear conclusions of our study is that security does not depend on the number of cameras. There is no evidence that says that there will be greater citizen security as long as there are more cameras. There is no reduction in crime or prevention of violent deaths related to the number of cameras. What does exist is a persecution of environmental and human rights activists, which is justified by the idea that there will be more citizen security.

So there's a quite complex situation. On the one hand, we have to think about what security is and how citizen security is built. It has always been justified by the fact that more technology or more weapons lead to greater security, which has clearly and historically been shown to not be the case.

CF: Within the requests for access to public information, have you found any evidence of rights violations against social leaders or organizations?

During and after the Correa government, the images of the ECU 911 have shown — and there are several news items that prove it — that information has been used above all to track people who were not sympathetic to the government of the time. For example, it is clear to us that video surveillance and cell phone sensors have been used to understand where environmental activists and defenders are located in Ecuador. Especially people who were very close to the ITT [referring to the Yasunidos collective, a citizen initiative that opposed Rafael Correa's decision to exploit the oil in the Yasuní biosphere]. There was persecution there; there was also political persecution of people who were not in favor of the government.

CF: According to the research, what type of technologies and from which countries are these types of equipment being purchased?

AC: Well, the technologies that Ecuador buys mainly come from Hikvision from China, Axis from Sweden, and Verint from Israel and the United States. These are the three main ones. I think it is very important that we keep an eye on who these companies are, especially Hikvision and Verint, because of the scandals they have had before.

Hikvision, which is from China, has software that does facial recognition, stores the data, and there seems to be extra data storage. That implies that, somewhere, data is being stored, for one thing. On the one hand, this technology was developed in concentration camps in China. There is an open lawsuit against China for the development of this technology in contexts of violence. There is an organization in charge of making demands on Hikvision and constantly monitoring where their technology comes from and how it is being produced and what is changing regarding facial recognition. On the other hand, Verint is from Israel and the United States. This company is more advanced in war technology.

So the fact that Ecuador is buying from these three brands, from Sweden, Israel, and China, tells us about certain geopolitical agreements with respect to who is being given information; who is providing this. Companies do not enter into relationships naively. They arrive, do tests, give away a few cameras; after that they come back, negotiate. Apparently, within the Correa government, there were several moments where Hikvision made deliveries of quote-on-quote ‘free’ cameras that are now clearly reflected in purchases. They work faraway places, like the local government of Shushufindi, a city within the Ecuadorian Amazon. Although it is a city through which oil passes and there are oil businesses, it has an absurd number of cameras in relation to the number of citizens.

CF: Why the insistence on this type of surveillance technology by governments if it is known that there are no conclusive studies on their effectiveness in combating crime? Why do you think this happens, according to your investigation with La Libre for Access Now?

AC: There is a messianic idea about technology: that it is going to save us from something. Unfortunately, we don't know what that something is. This idea around technology implies removing the faces of those who are truly responsible.

There is an extremely patriarchal idea that the more weapons and violence, the faster we are going to solve problems. It is much more difficult to think about community: how are we going to really solve the problems of insecurity; organize at the neighborhood level? Not based on violence but based on well-being. Within this system, nothing is thought of welfare except in the sense of economic benefit and violence.