Community leaders were jailed for speaking out about the environment 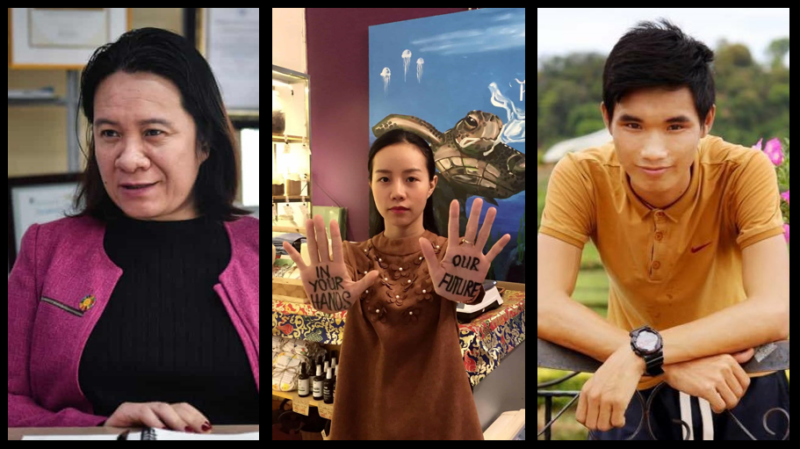 From left to right: Nguy Thi Khanh, Cao Vinh Thinh, and Nguyen Van Ho. Photos based on an article published by The 88 Project

The right to enjoy a clean environment and the right to speak up for it are protected by international law. In Vietnam, however, people who attempt to exercise these rights are often harassed, intimidated, and jailed.

Activist Cao Vinh Thinh, for example, has been kidnapped, interrogated, and evicted for her efforts to combat climate change. Nguyen Anh Tuan was arbitrarily detained by the police after he mobilized people against the commercial development on the Son Tra Peninsula. And Le My Hanh was brutally attacked by pro-government criminals while live-streaming about the Formosa environmental disaster.

Being an environmental activist in Vietnam can also land you in jail. Hoang Duc Binh, a well-known activist who reported on the catastrophic poisoning of marine life by the Hung Nghiep Formosa Ha Tinh, Ltd. (FHS) in 2016, was sentenced to 14 years in prison for “abusing democratic freedoms.” Nguyen Van Hoa was slapped with a seven-year sentence after he live-streamed videos of peaceful protests outside the Formosa plant. More recently, Dinh Thi Thu Thuy, an aquaculture engineer, and ecological activist, was convicted of spreading “propaganda against the state” and is also serving a seven-year sentence. Thuy is well known for her work to address the environmental damage that results from poorly regulated foreign investment.

As these activists languish in prison, others have been forced to leave the country. In 2018, Nguyen Ngoc Nhu Quynh (a.k.a. Mother Mushroom) went into exile in the United States after serving two years of a 10-year sentence for conducting “propaganda against the state.” Quynh is a co-founder of the Network of Vietnamese Bloggers, which wrote about a range of issues, including environmental degradation. While such harsh penalties are usually reserved for seasoned activists, in recent months the government’s crackdown has expanded to include leaders of officially-registered non-governmental organizations (NGOs).

The arrest and imprisonment of four well-known NGO leaders earlier this year — Mai Phan Loi, Bach Hung Duong, Dang Dinh Bach, and Nguy Thi Khanh — sent shockwaves through Vietnamese civil society. All four leaders were arrested and jailed for “tax evasion,” a tactic used by the government to silence critics who cannot persuasively be tried under national security provisions of the criminal code. Loi, Duong, and Bach are now serving prison sentences while Khanh awaits her trial in arbitrary detention. Many suspect that the charges brought against them are politically motivated and, at least in part, due to their attempts to monitor the government’s compliance with human rights clauses in the EU-Vietnam Free Trade Agreement (EVFTA).

These stories illustrate how speaking out to protect the environment in Vietnam is a dangerous endeavor. Harassment, intimidation, and imprisonment are just some of the tactics Vietnam uses to silence environmental activists. On World Earth Day 2022, we should celebrate these brave activists and condemn their persecution by the Vietnamese government.