It may widen regional divides in the future 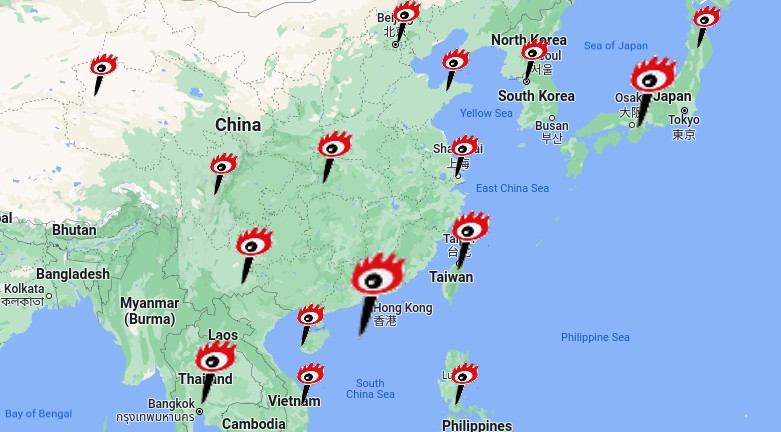 Though the platform has been showing user IP information since March, the latest application upgrade launched on April 28 will show users’ locations whenever they publish on Weibo. The company’s announcement said that the change was to protect users’ rights to information:

Weibo has been dedicated to maintaining a healthy and orderly environment for discussion and protecting users’ right to access real and valid information in a timely manner. In order to prevent the impersonation of eyewitnesses of social incidents, malicious rumours, and abusive behaviour to boost page views, and to ensure the circulation of real, transparent content…

Other social media platforms have also launched the geolocation tag feature and a few netizens have raised some privacy concerns.

The whereabouts of the patriots

Meanwhile, many citizens are surprised to find out that a number of patriotic opinion leaders are residing outside China. Among the most eye-catching ones is prominent blogger Lian Yue, as highlighted by tech-blogger William Long:

The prominent patriotic blogger Lian Yue once urged people not to migrate to Japan. After the introduction of the new geolocation IP marking policy on various social media platforms, an article that Lian Yue published on April 29 indicated that his IP is in Japan.

Upon the exposure of his whereabouts, the patriotic opinion leader admitted that he is indeed in Japan for medical tourism. But many netizens are not satisfied with his answer. On Weibo, many asked him to reveal his disease and why he had to travel all the way to Japan for treatment.

More shocking exposure is the whereabouts of Diba, an online group which has built its reputation by organizing expeditions on Facebook and Twitter to spread patriotic messages overseas. Its geolocation data indicates that the account is posted from Taiwan, Hong Kong and Japan.

Diba has become famous after organizing a Facebook expedition to troll the newly elected Taiwanese president Tsai Ing-wen in 2016.

Though the geolocation tag can be explained by the use of VPN, a circumvention tool, there are also claims that two key members of Diba are indeed residing in Hualien city of Taiwan and allegedly both are active in spreading fake news about Taiwan on mainland Chinese social media outlets.

Diba's whereabouts prompted a flood of mockeries on both Taiwanese and Chinese social media. Some mocked Diba as a “foreign force” or even a spy, others laughed at the new feature as it has unexpectedly exposed the overseas Chinese Tiny Pinks [a monomer for hyper-nationalistic Chinese citizens] and disinformation networks.

The following Weibo post summed up the nature of patriotic performance on Chinese social media reflected in the location data:

Upon the publication of IP geolocation data on Weibo, the ghosts and monsters are made visible. Lian Yue, a key patriotic opinion leader is having fun in Japan while attacking the US in his posts. Di Ba, which claims to liberate Taiwan, is based in Taiwan… They have been inciting netizens’ emotions will ill-intention, disrupting the order on the internet, and making a profit by attracting views from stupid people…

On the other hand, many self-proclaimed overseas accounts are actually operating in China. For example, the geolocation of “Affairs in the UK” (英國哪些事兒), a Weibo account with 12 million followers is in fact based in Guangdong.

The majority of social media accounts with an overseas image have built their media businesses by translating foreign news and viral content to attract views (such as “Affairs in the UK”)  and advertising products and services (such as “Rabbit mom in the US” 兔媽在美國 which publishes from Beijing).

After their readers discovered, they were not residing overseas as they claimed, some of these bloggers shut down their comment functions to block sarcastic and angry comments.

A few have stepped out to clarify. For example, video blogger “Anhan sister and her family are in the US” (安嫻姐姐一家在姐姐) explained that her posts with the Xiamen geolocation tag were published by her sister. But not so many people buy her explanation.

Amid all the chaos, it is anticipated that more Chinese netizens will use VPNs to hide their geolocation. It may bring other consequences too as pointed out by Twitter user @KooPeben

The publication of location data on Weibo has exposed half a million [pro-Chinese government navy personnel locations], it will have more impacts:

Indeed, regional stereotypes are often seen on social media. For example, on mainland Chinese social media, Hong Kong is often associated with the image of a spoiled and disobedient offspring who takes advantage of the benevolence of the motherly central government (央媽) and the current political crackdown is thereby a family lesson.

The outbreak of COVID-19 has also fuelled regional conflicts. For example, Shenzhen accused Hong Kong of spreading Omicron across the border. Shanghai has also faced similar accusations from other cities and there is clearly a regional divide in the online public discourse, as observed by @big_ear_cat on Twitter:

For those whose IP address is not in Shanghai said Shanghai is doing great. Shanghai residents are complaining. It is clear who the Internet water army is.

The Chinese propaganda authorities claimed during the last weekend that Shanghai had Omicron under control as it did not have new cases outside quarantine facilities and districts. Many non-Shanghai Weibo users echoed the state media reports with positive remarks while Shanghai residents continued complaining about the lockdown chaos.

We are likely to see more regional divides of public opinions on national policies in the future, and its long term impact is yet to be observed.