Fighting cyberbullying used as an accuse to reinforce censorship 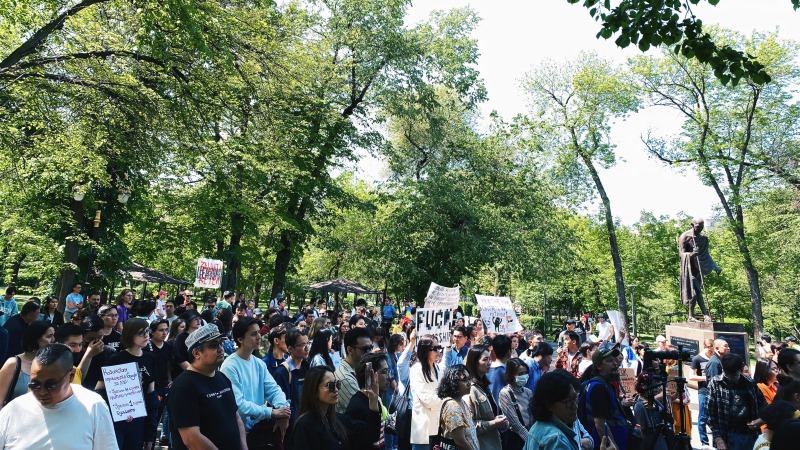 Rally of the opponents of the ‘Cyberbullying law’ at the Gandhi park. Almaty, April 23, 2022. Photo by Zhar Zardykhan

Kazakhstan's President Kassym-Jomart Tokayev signed the amendments to the laws on “protection of the rights of the child, education, information, and informatization,” which may further restrict media freedom in the country. The move, ironically, was announced on World Press Freedom Day on March 3, 2022.

In its original draft, under the pretext of protecting children from cyberbullying, the law would not only oblige foreign “online platforms” to register a local legal entity or representative office headed by a citizen of Kazakhstan, but also force them to remove “undesired” information within 24 hours upon the appeal by an amorphous “authorized body.” The draft bill was hastily adopted at the first hearing, given that a one-party dominant political system offers no real scrutiny or criticism, on September 15, 2021, by the Mazhilis, the lower house of the Kazakh parliament.

According to the constitution, the Mazhilis has the exclusive right of initiating bills, which, if adopted, are sent to the Senate, the upper house, for approval to become a law, unless the Senate rejects it or modifies and returns to the lower house. If Mazhilis accepts the modifications, the bill is passed and awaits the president to sign it into law.

But even without the proposed bill, the existing Law on Mass Media considers online platforms, including social media, as mass media outlets, making their owners legally responsible as any media, therefore subject to suspension or ban. Thus, bloggers and other online content makers could be legally accountable for violating the law along with journalists, although journalists enjoy a few other legal privileges, such as accreditation. Moreover, the 2014 amendments to the Law on Communications already extended the list of officials entitled to block online publications without a court order, which includes the general prosecutor, their deputies, and the National Security Committee (KNB). This has already resulted in more than 90 percent of websites being blocked without a court order.

The legal remedies are not confined to bans and blockings only. On May 1, 2022, a resident of Kazakhstan with Ukrainian citizenship was arrested for ten days and currently faces deportation simply for reposting an Instagram story supporting a pro-Ukrainian rally on May 1, which she herself deleted prior to any legal complaint.

In his address to the nation on March 16, 2022, Tokayev shared his vision of the s0-called “New Kazakhstan” in the aftermath of massive protests and civilian deaths in January of 2022, highlighting the vital importance of competitive and free media, adding:

The state will pay special attention to the creation of an open information space and strong, demanded media. … I am convinced that further democratic transformation will be impossible without independent and responsible mass media.

Ironically, from the outset of his unexpected rise to power following the resignation of the former president Nursultan Nazarbayev on March 19, 2019, and despite promising rhetoric, Tokayev’s presidency was associated with silencing dissent, arresting opposition activists, and restricting media freedoms.

For instance, Kazakh authorities were reported to be spying on journalists using the notorious Pegasus software, and implementing media censorship and blockings on local news outlets upon their publication on financial misappropriations associated with the family of the former president. According to a report, during the state of emergency (January 3–12) that was declared amidst January protests in Kazakhstan, one journalist was killed, ten assaulted, eleven arrested, and five editorial offices attacked. So far, the government has failed to carry out an impartial, transparent, and effective investigation of the tragic events that claimed 232 lives according to the official reports, with eight more deaths due to torture and the use of excessive force upon detention by security forces.

Under these circumstances, the nominal advancement of Kazakhstan from the last year’s 155th position to 122nd in the Reporters Without Borders (RSF) 2022 World Press Freedom Index should not be mistaken for a sign of improvement, as it mainly reflects the changing methodology, while the individual score for Kazakhstan actually declined from 49.72 to 48.28.

As far as internet freedom is concerned, Kazakhstan scored 33 out of 100 in the latest version of Freedom House’s Freedom on the Net index, which qualifies the country as “not free,” citing arrests and detention of journalists and bloggers, as well as the introduction of monitoring technologies and recurrent denial-of-service (DDoS) attacks. 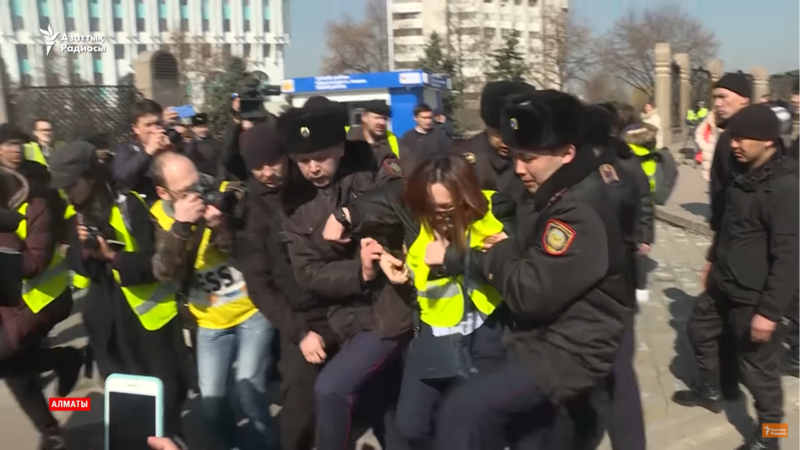 Detention of a journalist in Almaty, March 2, 2020. Screenshot from the Azattyq TV YouTube channel

As for the original draft of the amendments known colloquially as the “Cyberbullying law” (закон о кибербуллинге), it went into great detail describing the status and function of online platforms and messaging services, their legal registration procedures, and the nationality (but not professional qualifications) of the head of their representative offices in Kazakhstan, seldomly focusing on cyberbullying or harassment. This draft bill, which bears a clear resemblance to the existing legislation in Russia and Uzbekistan, would not only grant the authorized body (уполномоченный орган) the right to block access to foreign online services and messengers without a court order, but would ban them in Kazakhstan altogether if they would not agree to legally register and open a representative office in Kazakhstan.

It was clear from the beginning that protecting children from cyberbullying was a morally appealing contemporary excuse, as until now Kazakhstan never bothered to incorporate bullying, let alone cyberbullying, into its penal code or administrative offences, and there is virtually no criminal liability for cyberbullying. As could be expected, among the grounds for the Kazakh government’s request to remove content revealed by Google for 2020, bullying or harassment was mentioned only once, with “criticism of the government” (44) and “threat to national security” (39) being the most common censorship requests.

From the time of its adoption by the lower house of the parliament, the draft bill sparked public outcry, especially among journalists and human rights activists, followed by numerous appeals and petitions against the proposed amendments. Many of them agreed that the primary goal of the amendments was the restriction of social media, rather than the protection of children. As Jamilya Maricheva, the founder of Protenge, a social media outlet that monitors improper use of budgetary funds, has put:

Evidently, this was supposed to happen eventually, since at the moment social media is the only free platform that the authorities could not somehow bring under control.

Traditional media in Kazakhstan are heavily dominated by state-owned outlets or by those with close links to the government, while opposition print had been systematically ousted. Overall, the number of media outlets is in steady decline.

The public protests continued well into March 2022, while the draft bill was revised by the Senate, as numerous human rights and media freedom groups appealed to the government to drop the bill altogether. This time, along with the violation of principal freedoms, the potential financial damage of the prospective ban of social media platforms, estimated to be USD 5 billion annually, was also brought forward. At the same time, in April, opponents of the bill held rallies both in the capital Nur-Sultan and Almaty.

Eventually, on April 14, 2022, the Senate returned the draft bill to the lower house, proposing significant modifications, depriving the “authorized body” of the right to block access to websites, social media, and messengers at its discretion, and restricting the publications to be removed only to information that would be considered by an expert group as cyberbullying targeting a child. On April 20, 2022, the lower house approved the modifications by the Senate to be signed further by the president, but critics still highlight that the bill lacks clarity on the procedures and functions of the expert group as well as clear and exhaustive definitions. 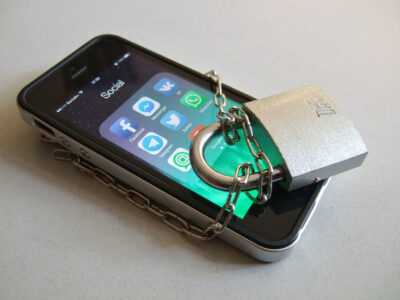