Does Indonesia have a healthy free press? Not according to West Papua 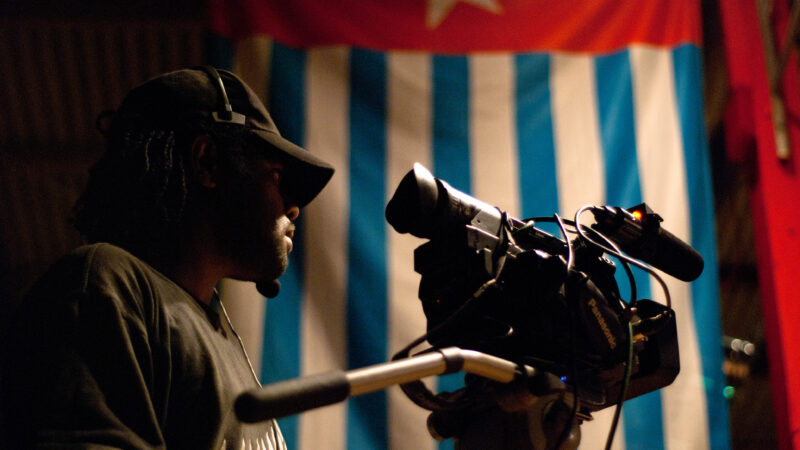 A journalist working in West Papua in front of the Morning Star Flag — an international sign of the Free Papua Movement. Used via Wikipedia Commons license (CC BY-SA 3.0)

For nearly 60 years, West Papua, a region in the easternmost stretches of the Indonesian arhipelago, has been engaged in one of the longest-running independence struggles of any region in the world against occupying Indonesia. Despite the longevity of the independence campaign, it has often escaped the notice of international outlets and Western audiences. This is in part because of the Jakarta government's concerted — and largely successful – efforts to censor and control narratives from West Papua. 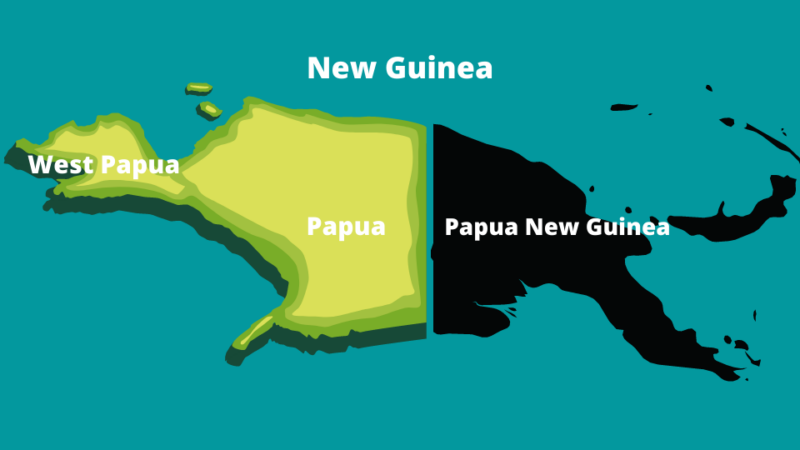 The island of New Guinea is divided into the independent state of Papua New Guinea on the eastern half and Indonesian-controlled Papua on the western side. Indonesia-controlled Papua has been further divided by the Indonesian government into Papua and West Papua. These are the provinces that have been fighting for independence for the last 60 years. Jakarta is considering further dividing the region into smaller provinces — against the wishes of scholars and indigenous communities in the region, who believe the move will decrease transparency and increase corruption in the region.

Papua has been occupied by Indonesia since 1962 after the Indonesian military invaded and annexed the province, despite assurances by the former colonial Dutch government of sovereignty for the Papuan nation. Since then, Papuans have faced decades of brutal oppression punctuated by massacres, torture, censorship, and conflict between the Indonesian army and West Papua National Liberation Army (TPNPB) that has left civilians as collateral. Some estimates suggest that over 500,000 Papuans have been killed by Indonesian military forces — though these are somewhat outdated estimates and the real toll is likely much higher.

In addition to its alleged human rights abuses, Indonesia has an abysmal record regarding press freedom in Papua. Activists and media workers in the region are routinely silenced through censorship, internet throttling, physical attacks, torture, and even death. According to some international reports, since current President Joko (Jokowi) Widodo became president in 2014, this persecution has gotten worse.

Local journalists in particular face intense harassment and scrutiny from the Indonesian government. Journalists have been jailed, beaten, doxxed, and targetted for speaking out about the vast human rights violations in West Papua. According to a 2021 Alliance of Independent Journalists Indonesia (Aliansi Jurnalis Independen – AJI) report, there have been 114 cases of violence against Papuan journalists in the past 20 years.

Human Rights Watch (HRW) detailed these instances it's its 2015 report entitled “Something to hide?” The report revealed Papuan journalists routinely receive anonymous threats via text and voicemail, which they believe to be from Indonesian security forces. One local reporter told HRW:

I cannot count how many SMS, email, or social media [threats] that I have received. The accusations are always that I am a foreign agent. The threat is often to kill me, or to attack my office. Or burn my office. That’s why I often change my cell phone numbers. I have lost count of how many times. Maybe 300 times? I always think [the harassers] want to disturb me mentally. I always delete their threats. I don’t want to be influenced by them.

Other journalists, such as Duma Tato Sando, the managing editor at Chaya Papua, a daily newspaper in Manokwari, Papua told the group he is often pressured by security forces to not publish stories that mention human rights abuses. He said:

For me, covering human rights abuses in Papua is not easy. In Manokwari, usually an intelligence officer will call and ask that the news story be “pending.” They like to say, “please do not publish it.” Sometimes they even ask me for background information, such as places, names, and times [of incidents of human rights abuses] because they do not know that their own men did the beating or the shooting. I have too many cases [of such harassment] to recall one-by-one.

In another case just over one year ago, in April 2021, West Papuan journalist Victor Mambor’s car was vandalized in a clear act of targeted intimidation. At the time, the AJI said “these acts of terror and intimidation are clearly forms of violence against journalists, and threaten press freedom in Papua and more broadly in Indonesia.” Mambor is the founder of the Tabloid Jubi media outlet. He and his staff have faced numerous instances of harassment over the years, including physical, psychological, and digital attacks.

The situation is even more dire for women who choose to pursue journalism in Papua, like in the case of Elfira last February, who received a rape threat in Jayapura District Court while reporting on court proceedings.

Foreign media, NGOs, and humanitarian agencies have been largely denied access to West Papua, which has created challenges in holding the Indonesian government and security forces accountable. The Jakarta government has tightly controlled the flow of information from the region.

And even when foreign watchdogs or media are able to enter the region, they can seldom do so without a government escort, and are liable to face deportation if they upset authorities.

Some international journalists have managed to make unofficial visits to the region that were not pre-approved by the Indonesian government. Rohan Radheya, a Dutch freelance journalist interviewed by HRW said during his unofficial visits to Papua, he saw a pattern of daily “threats and intimidation” against Papuan journalists, adding, “They were good journalists, they have a good network, and some of the [Papuan journalists] I met, they have bullet holes, they have been stabbed by [Indonesian security] forces, and they continue to wake up in the morning and just go about and do their jobs.”

To help combat this oppression, AJI’s Papua chapter launched Papua legal aid in December 2021, noting, “The number of cases of violence against journalists in Papua has made the results of the Press Independence Index assessment by the Press Council for the last 4 years place Papua as the region with the worst press freedom conditions in Indonesia.” The group aims to provide legal assistance to journalists in Papua who are victims of violence and intimidation.

The information block in West Papua has drawn international condemnation and tarnished Indonesia’s reputation on the international stage. 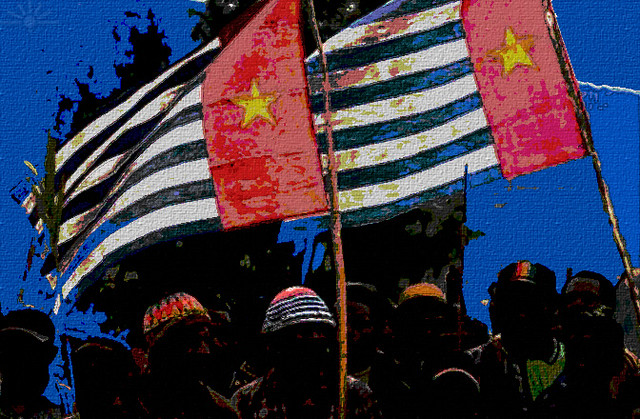 In this artistic rendition, protestors march with the Morning Star flag — a symbol of the West Papua independence movement. Via Flickr license (CC BY-SA 2.0)

The censorship is especially blatant during times of conflict or strife. Actors in the West Papuan Independence movement have occasionally succeeded in drawing national attention to their campaign, which often consists of acts of civil disobedience and protest. In 2019 tensions came to a head after a racist incident against Papuan students in Surabaya by Indonesian military forces. In response, protests broke out in Papua, which police forces violently stamped out, killing 10 Papuan citizens in the process. This act of violence sparked widespread protests across the archipelago nation. During this period, the Indonesian government throttled network connections in West Papua to stop information from flowing outward, which Jokowi said was for the “common good.”

While Papuan media outlets struggled to share their stories during this time, reports emerged of human rights violations, oppression, military violence against civilians, and more.

Even outside the press abuses in Papua, Indonesia’s media faces a challenging landscape. While Jokowi ran a presidential campaign promising to bolster Indoenisa’s free press, he has resoundingly failed on these promises since being elected in 2014.

In 2020, Jakarta passed the Law on “Informasi dan Transaksi Elektronik” (Electronic and Information Transactions Law), which made it legal for the government to throttle internet services and arrest journalists for disrupting the peace and publishing “prohibited content.” The controversial law has drawn criticism from activists and human rights groups as many call it a major backstep for the largest democracy in the region.

The situation has only deteriorated as public attention was focused on the COVID-19 pandemic.

According to RSF reporting, journalists are banned from publishing not only “false information related to the coronavirus but also any information hostile to the president or government even if it is unrelated to the pandemic.”

According to Reporter’s Without Borders 2022 World Press Freedom Index, Indonesia ranked 117 out of 180 countries.