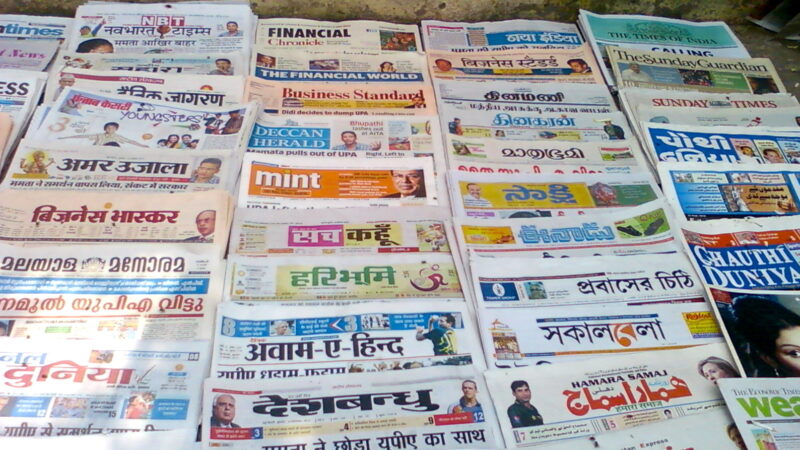 Indian Newspapers for sale at a vendors shop in New Delhi. Image via Wikipedia by Shajankumar. CC BY-SA 3.0.

In February 2022, India’s central government released the much-awaited central media accreditation guidelines. The guidelines lay down the eligibility criteria for journalists and mediapersons to obtain accreditation, the process of obtaining accreditation and grounds for suspension of accreditation. They also list the duties and powers of the governing body, the central media accreditation committee, responsible for facilitating the process. Official accreditation allows mediapersons to gain access to government offices without getting stuck in bureaucratic logjams, and attend special meetings, thus serving as an essential tool to hold officials accountable and understand governmental decisions. Accredited journalists and their family members also become eligible for government subsidies under certain schemes.

What has been the response?

The guidelines have drawn a negative response from the Indian press community, activists, and concerned citizens. A newly added clause that lays down the conditions for the suspension of accreditation has sparked fears of press censorship by the state. The clause states that a journalist’s accreditation can be withdrawn in case “they act in a manner that is prejudicial to sovereignty and integrity of India, the security of the state, friendly relations with foreign states, public order, decency or morality, or in relation to contempt of court, defamation or incitement to an offence.” Among the other clauses, the journalist’s accreditation can also be suspended if they have been charged with serious cognizable offences.

Those opposing the rules point out that such vaguely defined clauses could jeopardise how journalists work, leaving them working at the behest of the state. The Editor’s Guild of India has asked the Centre to revoke the rules, especially since key stakeholders were not consulted. Questioning the broad grounds for suspension including “being charged with serious cognizable offence” and “defamation,” they say, “It is clear that these vague, arbitrary, and draconian clauses have been included with an intent to restrict any critical and investigative reporting of government affairs.” They also express concern regarding the conditionality of obtaining police verification for accreditation as it may be misused to stifle free speech. As an extension to the concerns listed by the Guild, it is imperative to note that it is not uncommon for journalists to be slapped with a First information report FIRs for violation of some criminal law, including anti-terror laws. Defamation is another tool used to silence critics and journalists. In India, media organisations file defamation cases against each other as well. If these guidelines continue, under which defamation is a criteria for withdrawal of accreditation, it may just solidify the existing will to file defamation cases against the media.

The Press Club of India (PCI), along with other prominent journalist groups, has taken several steps to pressure the Government. On February 11, the PCI sent a letter to the government expressing dissatisfaction with the guidelines. Following up, the club also started a signature campaign. On February 25, the PCI, the Editors Guild of India, and the Indian Women Press Corps (IWPC) passed a resolution unanimously against the rules and sent a copy of the letter to the ministry. This document stated: “The Government has failed to clarify the logic and emergency behind this move, which has unnecessarily created the crisis between the government and media.”

Some journalists and lawyers wrote opinion pieces throwing light on the severe ramifications such guidelines would have on press freedom and democratic values. Seema Chisti, a writer and journalist, notes: “The new ‘guidelines’ are not about ‘accrediting’ journalists but about how democracy is treated by those elected to office. It is a measure of how this government sees the role of questions, access and transparency.” She also points out how these rules are yet another way of reducing press freedom. In another piece, Dr. V Suresh, the national secretary of the People’s Union for Civil Liberties, wrote: “The sweeping powers can easily be invoked by the state agencies at the merest whiff of a journalistic piece critical of or questioning or disputing the government version of events, especially in troubled areas like the Kashmir valley.” E.P Unny, the chief political cartoonist with the Indian Express, drew a satirical cartoon showing a small boy “thanking” the Ministry for Information and Broadcasting for not adding a dress code as part of the guidelines.

As of May 22, there has been no publicly available government response on the concerns raised by the media groups or an indication of a desire to retract the rules.

Why is this significant?

Journalist bodies, civil society groups, and journalists point out that the rules come in against the backdrop of declining press freedom in the country where journalists routinely face intimidation, arrests, legal pressure, and threats. Moreover, they worry that this is yet another drop in the ocean of state imposed constraints on media using vaguely worded legislation that is prone to abuse. The Information Technology (Intermediary Guidelines and Digital Media Ethics Code) Rules 2021, an executive move, was criticised for creating a chilling effect on digital media. Under Kashmir’s New Media Policy, the Department of Information & Public Relations (DIPR), can stop the release of government advertisements on broad grounds such as “incitement to violence, questioning of sovereignty and integrity of lndia or  violation of the accepted norms of public decency and behaviour.” Last year, as reported by the Wire, the district magistrate of Kupwara in Jammu and Kashmir passed an order requiring journalists to “register” and “get approval” of the administration before reporting.

The media is often referred to as the fourth pillar of democracy, in addition to the legislative, executive, and judiciary. A pushback from one pillar, the executive, using laws undermining press freedom can create ripple effects. Weakening one pillar can shake the entire house.