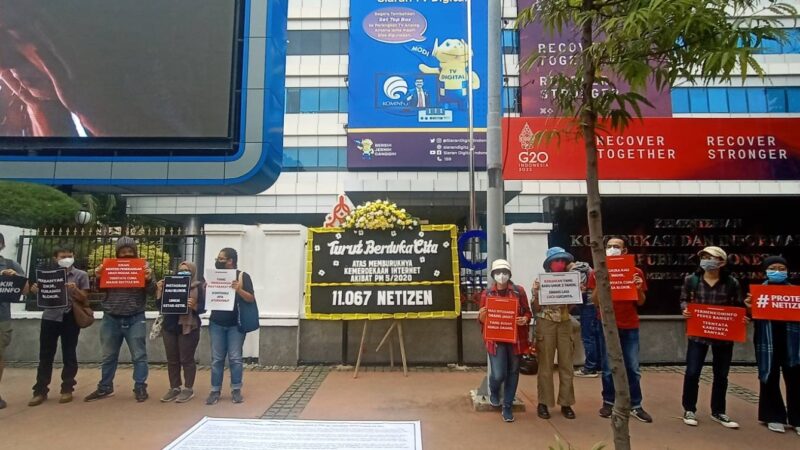 A protest against the Ministerial Regulation 5 in Indonesia. Photo from the Twitter post of Alliance of Independent Journalists and Remotivi

Indonesia’s Ministry of Communication and Information Technology (Kominfo) blocked at least eight websites including Yahoo, PayPal, and gaming platform Steam for failing to register with the government.

Both MR5 and MR10 have been consistently opposed by the media, civil society groups, and human rights advocates for containing provisions that pose a threat to freedom of expression.

The deadline for the mandatory registration was set for July 27, 2022.

Several reports have confirmed the blocking of PayPal and gaming platforms in the country.

In 2021, local and global civil society groups urged Indonesian authorities to review and repeal MR5 and MR10 since the registration of ESOs could lead to violations of data privacy and other digital rights. They reiterated their opposition this year as they warned against the “authoritarian enforcement” of the regulation:

MR5 and MR10, as well as their authoritarian enforcement against private ESO, seriously disrupt the civic space as they could erase key channels for individuals to exercise their online freedoms.

The Alliance of Independent Journalists (AJI), a group of Indonesian journalists, noted that registered ESOs are also obliged to remove content and enforce takedown orders issued by the government.

The obligation of registration will open the gate for the government to intervene and censor. It's not just an administrative matter.

It added that the order for ESOs to remove content that causes “public unrest” and “disturb[s] public order” can be abused to silence legitimate criticism:

It can be interpreted to target criticisms against authorities, state bodies, and law enforcers. The regulation also doesn't mention the mechanism of public complaints and the independent parties which are authorized to check the contents.

Michael Caster, the Asia Digital Programme Manager at ARTICLE 19, wrote about the other obligations of ESOs that could potentially expose the data of millions of internet users in the country:

In a blow to the right to privacy, digital operators are also required to provide KOMINFO with, among other things, a guarantee that law enforcement will be able to access their electronic systems and data. It is the responsibility of the local contact person to provide access or face penalties.

An online petition has been circulated to oppose MR5 and MR10. The hashtags #ProtesNetizen (Protest Netizens) and #BlokirKominfo (Block Kominfo) trended on social media as netizens criticized the blocking of popular gaming and payment platforms. Below are examples of popular memes and angry reactions on Twitter:

Kominfo unban PayPal for temporary for “migration”
I lost my job what do you mean migration??????
Indonesia government is a joke. I lost my patience they don't think their peoples who will lost their job as long as they get “money” #BlokirKominfo

Critics say the blocking of websites reflects the decline of digital freedom in the country. Aside from MR5 and MR10, laws like the “Informasi dan Transaksi Elektronik” (Electronic and Information Transactions Law) have allowed the government to throttle internet services and arrest journalists for disrupting the peace and publishing “prohibited content.”

The blocking of PayPal and others that haven’t registered according to the MR5 in #Indonesia is clearly too excessive. It posts a question of what good the general population gains from it when the internet is being controlled like this.

Around 200 foreign and 8,000 domestic private ESOs managed to beat the deadline on July 27. Authorities said they will temporarily unblock some websites that facilitate payments to allow users to withdraw their money and transfer to other platforms.