Activists call for the decriminalization of libel 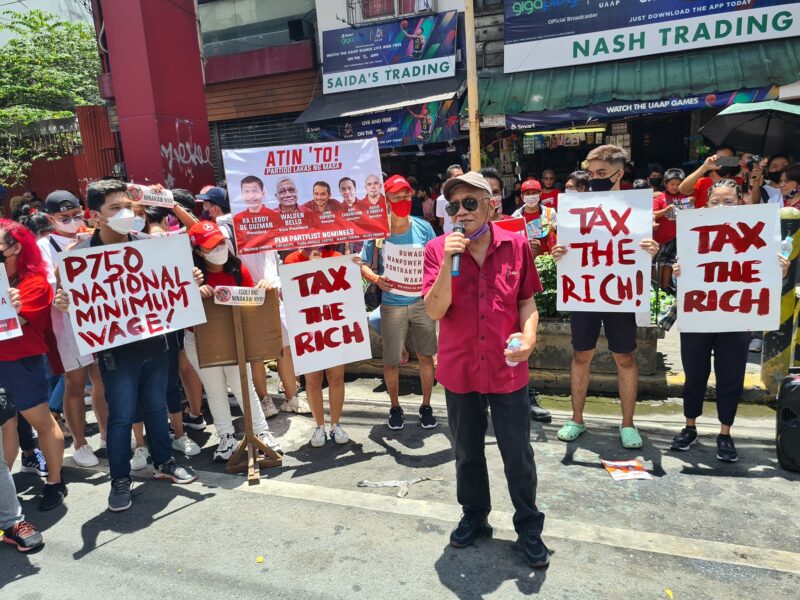 Walden Bello speaking during a Labor Day protest on May 1, 2022. Source: Facebook page of Walden Bello

Former Philippine congressman and vice presidential candidate Walden Bello was arrested on August 8 after he was indicted for cyber libel charges. He posted bail the following day and was subsequently released.

Bello is a sociology professor and veteran activist who was jailed for opposing the Martial Law government of Ferdinand Marcos Sr. in the 1970s. He served in the House of Representatives as an Akbayan Partylist legislator from 2009–2015. He ran for vice president in the 2022 election under presidential candidate Leody de Guzman. Their party campaigned on a platform of promoting a socialist agenda by empowering workers in society.

During the campaign period this year, he criticized the presidential candidacy of Ferdinand Marcos Jr., the son of the country’s late dictator. He also called out his election rival, Sara Duterte, for refusing to join media-sponsored debates. Sara is the daughter of former Philippine President Rodrigo Duterte. Marcos Jr. and Sara Duterte were elected and proclaimed president and vice president in May 2022.

After the elections, Bello warned about the “axis of evil” represented by the Marcos-Duterte tandem:

…the task for the coming period is not only to preserve our democratic rights from their being eroded under the rule of the Marcos-Duterte axis of evil. It is also to expand the mass base for a democratic socialist future for our country.

His cyber libel case was filed by Jefry Tupas, the former information officer under Duterte, who attended a beach party that was later raided by the narcotics police in November 2021. The complaint cited a Facebook post Bello shared which allegedly defamed Tupas by asking Duterte about her supposed role in protecting a drug user and dealer.

Was Tupas instructed by Sara Duterte to take away attention from her refusal to participate in the vice presidential debate? This strategy has one goal in mind: harassment.

Bello’s legal team petitioned to dismiss the charges, but the judge refused. Subsequently, a warrant of arrest was issued against him and he was detained by police. Bello has a message for the Duterte camp:

Arrested late afternoon Monday on silly charge of cyberlibel posted by the camp of Sarah Duterte. These people are mistaken if they think they can silence me and suppress my exercise of free speech.

Vice President Duterte denied having a role in filing the cyber libel complaint:

Instead of deflecting blame, playing the victim of an imaginary case of political persecution, and dragging me into his legal woes, I suggest that Mr. Bello be reminded of the fact that a civilized and democratic society does not respect hubris. The right to freedom of speech and expression does not protect anyone from defiling the name and reputation of others.

In response, Bello said the vice president was evading the issue:

This is not the behavior of a democratic personality but of one who has little respect for freedom of speech and knows only the art of intimidation. Flowery rhetoric will not disguise Sara Duterte's assault on a fundamental democratic right. She should act in a manner that befits a vice president and cease disgracing herself and her office by her futile defense of an indefensible act.

Bello’s arrest and detention drew widespread local and global condemnation. Senator Risa Hontiveros was among those who expressed support for Bello:

Walden is a leading public intellectual and a steadfast campaigner for justice and human rights. Critical voices like his are essential to any democracy.

Now more than ever, we need more people like him, whose genuine commitment to freedom and democracy is beyond question.

The arrest of Prof. @WaldenBello on cyber libel charges only shows how the strong arm of the law is still abused.

Then and now, I hold Prof. Walden, an intellectual giant, in highest esteem. I stand with him, unequivocally, in his current ordeal. This won't ever silence him.

Bello was arrested as media groups are pushing back against rising attacks on critical journalists. The websites of several media groups such as Bulatlat and Pinoy Weekly were blocked by the government for allegedly supporting terrorism. Additionally, the cyber libel conviction of Nobel Laureate Maria Ressa was affirmed by the Court of Appeals, and a government order revoking the incorporation papers of news company Rappler could lead to its shutdown.

After his release, Bello thanked those who showed solidarity during his detention:

My deepest thanks to all who mobilized against the grave threat to free speech posed by the charge of cyberlibel against me by the camp of VP Sara Duterte. What a wonderful display of unity in defense of our common values! With solidarity like this, how can we possibly lose?