Twitter and Meta in an uneasy relationship with the government 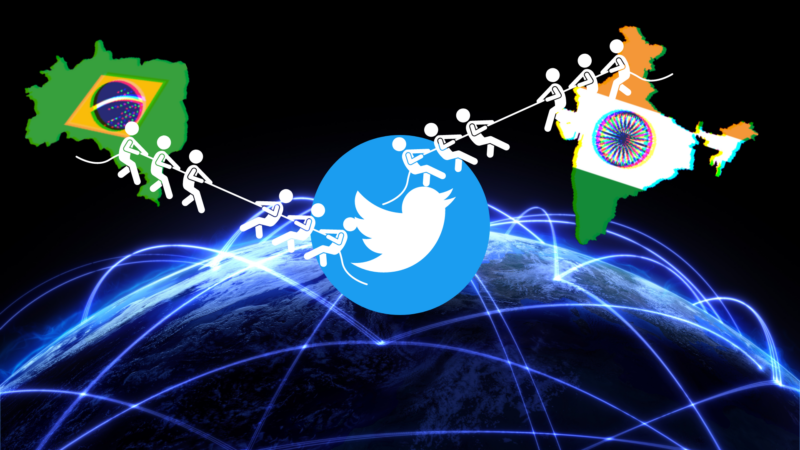 In the last decade, social media platforms have enormously impacted the democracies of India and Brazil. Their presence in the countries, their widespread adoption, and the subsequent use of these spaces and tools by orchestrated, harmful actors have led to a slide in fundamental rights. In Brazil, an important mark to remember is the 2018 general election process, when it was revealed that Jair Bolsonaro's campaign was using WhatsApp mass messaging tools to disseminate mis/disinformation about his Workers’ Party opponent.

Similarly,  the 2019 general elections in India were popularly called “WhatsApp elections,” given the extensive use of the platform for mass outreach by the political parties. Over the years, the influence that these platforms have had, especially Facebook, has come to light at various points. For instance, a Wall Street Journal report published in 2020 revealed that a close nexus between Facebook and the ruling party had been brewing. The report claimed that top executives had asked their employees not to take action against BJP leaders as it could hurt the company’s business interests in the country, and removed pages that propagated fake news’ against the party.

On the other hand, the Indian government’s relationship with Twitter has been tumultuous. At various points through 2021, the social media giant has not adhered to the government’s rules and legal requests to take down content, claiming that doing so would be detrimental to freedom of expression online. The government has responded with disdain, legal notices, and threats to seize Twitter’s office.  More recently, in July 2022, Twitter took legal action against the Indian government's orders to take down content.

India and Brazil are frequently compared due to the similarities of their leaders Narendra Modi and Jair Bolsonaro's authoritarian styles of governance. What also makes these countries fit for comparison is the role that social media has played in undermining these democracies. Additionally, both countries are among the largest markets for some of the social media giants.

When it comes to tech policy, it is also notable that in the two countries, over the last few years, platforms have begun taking action against this malicious use of their services by harmful and often coordinated actors; however, it is still far from enough to contain the negative impacts.

In the case of Brazil, these actors who have increasingly been targeted by platforms’ moderation actions, such as content takedowns, group suspensions and account bans, side with president Bolsonaro and have exerted an influential role among his supporter base. One example is far-right blogger Allan dos Santos, who has been de-platformed at the order of the Supreme Court and is currently a fugitive in the United States. Also, in the last two years, platforms have taken strong moderation actions against Bolsonaro himself, including the takedown of a live transmission and removal of potentially false publications. Another relevant point is that, in anticipation of the 2022 general elections, the Electoral Supreme Court (TSE) has set up cooperation agreements with the vast majority of social media companies operating in the country. Because Bolsonaro is against the TSE, which he views as a frauded, illegitimate institution, this means he views this agreement as a plot against him and his government, which is not the case. This cooperation agreement takes place as part of a program to fight electoral misinformation.

One immediate impact is potential government interference in how platforms operate within a certain country in order to serve a specific person or group's interest. In the Indian scenario, glimpses of this can be seen with the accusations made of Facebook favouring the ruling party at the expense of letting hate speech against minorities go unchecked. Mis/disinformation in the country is a major issue, and has even led to the loss of lives. Any polarization that serves the interests of one specific person or group using social media could have dangerous impacts on different groups, and society at large.

One other potential impact is that this pushback and fight against platforms eventually enters the economic realm, with potential sanctions or fines, which would force platforms to give in to these authoritarian leaders’ requests, and thus have implications for free speech and citizens’ privacy online.

As a reaction to the platforms’ response in ramping up measures ahead of the general elections, the Brazilian government is pushing back. This is particularly strong in the case of WhatsApp. The messaging app, by far the most popular in Brazil, has decided to withhold the launch of the Communities feature until after the elections in October 2022. This feature, set to launch globally in September, will increase the user cap on groups while also allowing Community admins to reach up to 2,500 people through broadcast lists. In April 2022, Bolsonaro requested a meeting with WhatsApp representatives in which he asked that the company launch the feature before the elections. According to news reports, his narrative was that “if the TSE can have an agreement with WhatsApp, then I also can have one myself.” By his logic, WhatsApp would have to serve his own interests, as his campaign would benefit from these larger groups.

In the case of India, mis/information are very real concerns, and time and again accounts of whistleblowers point out how powerful political parties in the country have used these platforms for their vested interests at the expense of democratic values and fundamental rights. More publicly, the power struggle between platforms and the Indian government is visible over content moderation policies. This was seen when the Indian government introduced the IT Rules 2021 which placed several obligations on social media giants. Several players, including WhatsApp and Twitter, criticised the rules as a government overreach that could change the internet freedom of users. WhatsApp legally challenged a clause that required the company to trace the originator of a message virtually breaking the end-to-end encryption. The company argued that such requirements would severely undermine the privacy of users as per reports. Twitter also opposed the Indian government’s IT Rules,  and received threats  that non-compliance would result in the company losing its status as an “intermediary.” In June 2021, Twitter lost its intermediary status only to gain it back after compliance with the rules.

There's no doubt that social media is one of the battlefields of digital authoritarianism, so we can expect to see more conflict with states and state actors as the platforms consolidate their hold the world over.