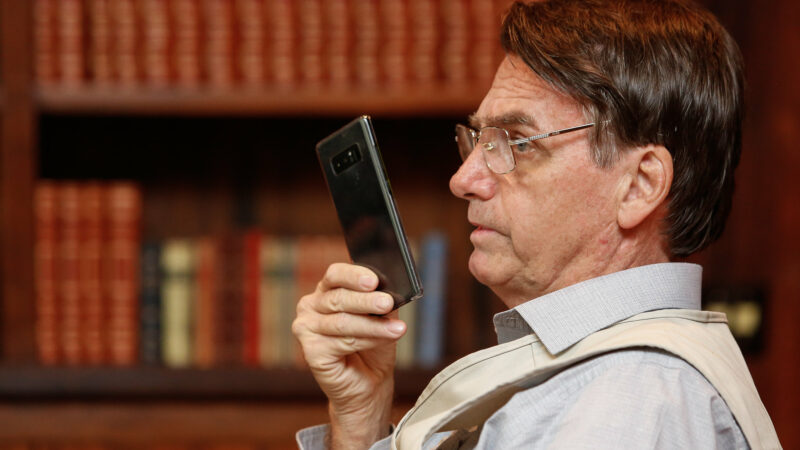 Image by Palacio de Planalto on Flickr. Used under a CC BY-NC-SA 2.0 license.

WhatsApp had a key role in leading far-right Brazilian President Jair Bolsonaro to the Planalto Palace in the 2018 general elections. One year later, the company admitted that its main product had been used in a mass messaging scheme to push false news about Bolsonaro's opponent, Workers Party's leftist Fernando Haddad.

Attempting to repeat the successful formula in his reelection campaign in 2022, Bolsonaro held a meeting — requested by him — with WhatsApp executives in the same Planalto Palace on April 27. The meeting's agenda was short, but it contained one important item: WhatsApp's decision to withhold the launch of the Communities feature in Brazil.

A few days earlier, WhatsApp had announced a major update to its messaging service. With Communities, users can organize multiple groups under one same broader group and administrators will have access to more detailed tools, including broadcast lists. In practical terms, this expands the member limit for groups and gives admins the power to simultaneously message thousands of users.

But there was a catch: while the feature was set to launch globally in September, one month before the elections in Brazil, the rollout in South America's largest country only began after the voting process concluded, with a gradual rollout beginning around November.

Bolsonaro was not happy. Making an exception for Brazil was “inadmissible,” he said. To add to his dissatisfaction, initial media reports suggested WhatsApp's decision to withhold the launch was part of an agreement with the Electoral Court (TSE), with whom Bolsonaro has been at loggerheads due to his groundless remarks about fraud in the electoral system. Later, the TSE denied having made such a request and WhatsApp confirmed it was purely a business decision.

“If they [WhatsApp] can make an agreement like this one with the TSE, they can make one with me too, why not? They can make one with you, with anyone,” said Bolsonaro a few days earlier, on April 16th. According to a Folha de S. Paulo report, during the meeting on April 27, Bolsonaro aimed to pressure WhatsApp into launching the tool before the elections so he could employ it in his reelection campaign.

The meeting did not turn out well for Bolsonaro. By the time the WhatsApp executives left the Planalto Palace — where the presidential office is located — the president had been assured there was no room for negotiation; the tool would only be launched after the second round, set for October 30.

According to Folha de S. Paulo, Bolsonaro had supposedly been convinced by the people present in the room, such as his Communications Minister Fábio Faria, to drop the issue of pressuring for an earlier launch date.

Even if unsuccessful, the meeting, put together with Bolsonaro's remarks, sends a clear message: the president thinks it is perfectly acceptable to interfere in a private company's decisions in order to advance his personal interests.

This is not a first for Bolsonaro. Throughout his presidency, the far-right leader has attempted to interfere in the way platforms operate in the country for his own benefit. In February 2020, Bolsonaro suggested increasing taxes paid by big tech companies, “who paid very little to operate in Brazil” aiming to safeguard “freedom of expression.” The suggestion came amid takedowns and other moderation enforcement against Bolsonaro and allies due to health disinformation during the pandemic.

But perhaps the clearest example took place a little over a year ago when Bolsonaro tried to edit a Provisional Measure that would modify Brazil's Internet Civil Rights Framework (Marco Civil da Internet) and effectively limit platforms’ autonomy in Brazil.

The measure established a series of pre-conditions under which platforms would be able to moderate content and any type of moderation outside these lines would entail penalties for the companies. Ironically, the list of pre-conditions did not include disinformation, hateful content, hate speech, and threats, hindering platforms’ responses to this type of content.

The measure, according to a Núcleo Jornalismo report, would allow the government and its supporters to continue promoting disinformative, violent speech targeting democratic institutions without this being subject to moderation. The impact would be so extreme that Meta, Twitter, and Google came out publicly to criticize the measure.

Public outcry and alerts from civil society organizations led Senate President Rodrigo Pacheco to return the measure to the Presidency, signaling that such an authoritarian attempt would not have a place in the House. But it also sent a message to Bolsonaro that, unlike government institutions, private enterprises are not up for grabs and will not be meddled with for his own interests.

Bolsonaro has since then spread out his digital strategy to many social media platforms. His channel on Telegram is the biggest in Brazil and among the biggest in the world. Gettr, founded by a former Trump aide, has become a safe haven for bolsonaristas with its lenient moderation enforcement.

The platform's executives have also shown sympathy for Bolsonaro's reelection campaign, even taking part in pro-Bolsonaro demonstrations and having the platforms’ institutional profiles reproducing government content to promote the president, which is viewed by some lawyers as a potential electoral crime.

In late October, Brazil voted to elect Lula as its next president by a tight margin, making Bolsonaro the first president in Brazilian history to fail reelection. WhatsApp's bet to hold off the launch of the mega groups proved itself to be a wise move. After being in the spotlight in 2018 due to its role in the dissemination of disinformation, WhatsApp was ignored, while all eyes were on Telegram, which was widely used in the days after the vote in the organisation of anti-democratic demonstrations, and where allegations of fraud and attacks to the electoral process were spread massively.