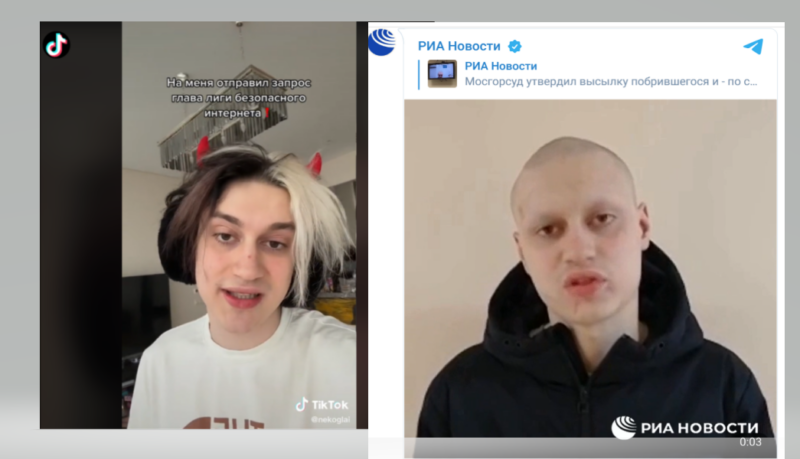 Nekoglai, before and after he was sent to the deportation center in Moscow. Collage made by Daria Dergacheva from screenshots of one of Nekoglai's videos, and the Telegram post of RIA Novosti.

TikToker Nekoglai has 9.6 million followers and is a sensation among teens. He lives in Moscow, and his videos usually have him lip synching to a background song. His TikTok is produced in Russian. On November 8, 2022,  Nekoglai recorded a parody video of a Russian soldier. The original video was released to the public by a pro-war propagandist Telegram channel and shows a soldier laying all alone in a trench, before being shelled with two grenades from an (allegedly) Ukrainian drone, and throwing them away by hand.  In his parody video, the teenager blogger Nekoglai lay on a carpet and threw away “the grenade.”

He was reported for making this video by Ekaterina Mizulina, the head of “League for the Safe Internet” (a Russian state-related foundation) which authored many restrictions placed on the Russian internet. She is the daughter of notorious Russian MP Elena Mizulina (who was the author of several repressive legislation on LGBTQ+ and ‘family values’). The young Mizulina said in her Telegram channel  that she would appeal to the police and General Prosecutor's Office to look into Nekoglai's video because it is “discrediting the Russian army.”

Read more: ‘Call them by their names': Stories of Russian anti-war political prisoners

Nekoglai is a citizen of Moldova.  Due to Mizulina's accusation, he was detained on November 9 for “breaking the immigration law,” and placed into a detention center for migrants, after which Moscow Presnya region court quickly ruled to deport him to Moldova.  The blogger’s lawyers appealed the decision but the Moscow city court supported the ruling on November 11. After the court’s decision, the Russian State news agency RIA Novosti released a video of Nekoglai with his signature hair and his eyebrows shaved, and his face bearing signs of beatings.  On the video, the blogger says: “Now I really understand what mistake I made. I regret, I am very ashamed. I think that if I had been in the place of that soldier in the trench, then I would not have survived. I feel like an animal. Forgive me, please, if possible.”

This is not the first time that the Russian police and propaganda machine have used self-shaming videos to punish dissent and promote fear in others. As the BBC wrote, this “ritual of guilt and shame” has been increasingly used by the police, first in the republics of North Caucasus, and then all over Russia, to publicly show the “remorse” and fear of those protesting.  The same tactics were also applied by the Lukashenka’s regime in Belarus after the mass protests erupted against the fraudulent elections in 2020.

As Meduza reports, Nekoglai’s defenders suggested that the blogger was being mistreated at the detention center. The lawyer asked if physical force was used against him, to which Nekoglai, according to the Russian state news agency TASS, “with tears in his eyes” replied “no” and said: “I just want to be deported faster, I don’t want to wait, I want to go home. I'm really ashamed, I really regret everything.”

One of the comments under Nekoglai’s video on TikTok said, in Romanian: “Brat noi te așteptăm mai repede la Moldova ca aici contentul tau va fi mult mai interesant , tot va fi bine!” [Brother, we are waiting for you in Moldova as soon as possible, because here your content will be much more interesting, it will still be good!].