The student faces one count of criminal defamation 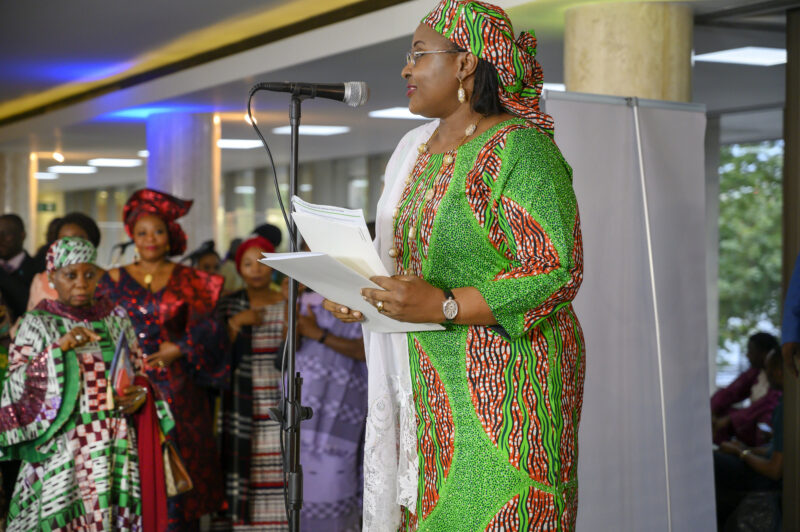 The First Lady of Nigeria Aisha Buhari at a past event. Image Source. Attribution 2.0 Generic (CC BY 2.0)

On November 18, Nigerian police arrested a 24-year-old final-year student of Environmental Management and Toxicology at the Federal University of Dutse, Aminu Adamu Muhammed, over an alleged defamatory tweet he posted in June.

The tweet, which later went viral, was posted in Hausa and accompanied by a photo of Nigeria’s first lady, Aisha Buhari reads, “Su mama anchi kudin talkawa ankoshi,” which translates to “the mother has gotten fat on masses money.”

Corruption in Nigeria is endemic. A 2021 Corruption Perception Index (CPI) report released early this year by Transparency International (TI) ranked Nigeria 154 out of 180 countries. To many, it came as no surprise.

Many Nigerians know intuitively—that a steady stream of official antigraft rhetoric has hardly made a dent on what many agree is the most formidable perennial challenge to the country’s long-term stability. President Buhari’s sentiment to the effect that “if Nigeria does not kill corruption, then corruption will kill Nigeria,” is widely shared.

The tweet drew reactions with some leaving comments on the tweet by sharing photos comparing Aisha Buhari’s body size before and after she became First Lady.

Sections 391 to 395 of Nigeria’s Penal Code for northern states and the Federal Capital Territory account for criminal defamation. Section 392 explains the punishment for defamation “whoever defames another shall be punished with imprisonment for a term which may extend to two years or with a fine or with both.”

Defamation in Nigeria involves the publication of words that can cause hatred, contempt, ridicule, or damage to the reputation or profession of a person to the hearing of such person or a third party without justification.

Muhammed was arraigned and charged for criminal defamation against the first lady on Tuesday before a court in Maitama Abuja, the country’s capital. The court ordered the defendant to be remanded to Suleja Prison pending the hearing and determination of his bail application.

Every Nigerian is entitled to freedom of expression, including the freedom to hold opinions and to receive and impart information without interference as stated in Section 39 (1) of the constitution. This is subject only to the laws of the country as to libel, slander, or injurious falsehood.

The uncle of the arrested student, Shehu Baba Azare told BBC Hausa that the family is pleading with the wife of the president to forgive their son. He said the family had no knowledge of the arrest until five days later when their son’s colleague told them he had not been seen for days.

“The next day Aminu called his father and told him that he was arrested and taken to Aisha Buhari in Presidential Villa and he was beaten and detained. He said one of the security gave him his phone to make the call.”

Aminu Muhammed’s arrest for ridiculing Aisha Buhari has sparked outrage on Twitter as human rights groups demand his release. Many Nigerians online are advocating for his release with the hashtag #FreeAminu.

Responding to the arrest, Amnesty International strongly condemned the rest asking for the immediate and unconditional release of the student.

Amnesty International calls for the immediate and unconditional release of Aminu Adamu Muhammed — a 23–year old student of Federal University Dutse, who was arrested on 8 November 2022 for a tweet alleged to be demeaning to #Nigeria’s first lady #Aisha Buhari.

Nigerian human rights activist, Aisha Yesufu, described Muhammed’s arrest as unconstitutional and outrageous. Her angry remarks challenged Nigerians to ponder whether they were citizens or slaves.

Who is Aisha Buhari that an aggrieved citizen cannot talk about? Those of you talking about her so called powers need to ask yourselves whether you are citizens or slaves.
Duniya budurwar wawa!https://t.co/StlVZBaGHk

Nigerian investigative journalist, Fisayo Soyombo backed Aminu in a tweet that defended it as factual.

Is it that she hasn't increased in size since her husband's coming to power in 2015, or is it that public office holders aren't fed on tax payers’ (the masses’) money?

So where is the lie in Aminu Muhammed's tweet?

Over 250 women organizations in Nigeria under the aegis of ‘Feminist Womanifesto’ have described Muhammed’s arrest and assault as “unacceptable in a civilian regime”. In a petition to the Attorney-General of Nigeria dated December 1, the convener of Womanifesto, Abiola Akiyode-Afolabi demanded an immediate release and investigation of assault.

Salihu Tanko Yakasai Dawisu, a gubernatorial candidate said Muhammed “was no terrorist to be locked up & denied access to his family & lawyer”. He condemned “The commando type of picking up citizens without due process” which he termed as “unacceptable” advocating for Aminu’s release while admitting he was wrong.

Aminu isnt a terrorist that should be locked up & denied access to his family & lawyer, what he did was wrong but what is being done to him is worst. He should be released or charged to court. The commando type of picking up citizens without due process is unacceptable #FreeAminu pic.twitter.com/QuOyyg6eg8

The National Association of Nigerian Students (NANS) North-west chapter, on Tuesday, issued a two-day ultimatum to Nigeria’s First Lady to release the student otherwise, they will embark on a mass protest to press for the release of the student.

“The student is due for his final undergraduate exam on 5 December. The student unions, human rights commissions, and civil society organizations will be compelled to march on the streets in solidarity protest across the country until we ensure his immediate release,” the NANS said.

Aisha Buhari is yet to publicly comment on the issue.

Last year, the Nigerian government suspended Twitter for seven months, lifting the embargo in January after Twitter agreed to the conditions made by the government, which further clamps down on the digital rights of Nigerian citizens.

Days before Muhammed’s arrest, a magistrate’s court in Kano state in northern Nigeria ordered two comedians, Mubarak Muhammad and Nazifi Bala to pay a fine of NGN 10,000 (USD 23) and also be given 20 lashes for defaming the state governor, Abdullahi Umar Ganduje on their TikTok accounts. The pair were also ordered to clean the court premises for 30 days.