The song's author was previously jailed for criticizing authorities 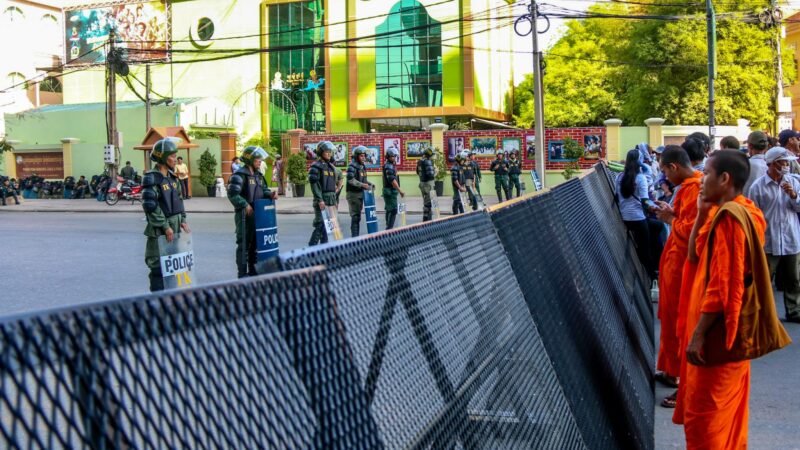 Police prevented protesters from coming near a court during the June 2014 trial of workers accused of instigating violence. The strike of workers was violently dispersed by the police in January 2014. File photo from human rights group LICADHO.

A music video about the violent dispersal of striking garment workers in 2014 was removed on social media after Cambodian authorities threatened to file charges against its producers.

On January 3, 2014, police attacked the strike of workers who were demanding a minimum wage increase. At the end of the day, four workers were killed and dozens were injured, and one has remained missing up to this day.

Human rights group Cambodian League for the Promotion and Defense of Human Rights or LICADHO marked the ninth anniversary of the dispersal by releasing a music video featuring video footage of the bloody dispersal of the strike. The song titled “Blood of Workers” was penned by Kea Sokun, a rapper who was detained in 2020 for alleged incitement. It reflected the message of labor and human rights groups that had been campaigning for justice over the past nine years. This is indicated in the lyrics of the song:

For the past nine years, they have been left with pain and sorrow and sadness by gestures full of blood.

But Culture Minister Phoeurng Sackona filed a police complaint against the music video producers for “provoking and inciting content that may cause insecurity and social disorder.” The letter even mentioned the previous detention of the rapper.

It is LICADHO’s belief that the music video is not incitement, and is protected speech under the Cambodian Constitution. We are saddened by this restriction on freedom of expression. This is the first time in LICADHO’s 30-year history that the government has taken legal action as a result of a complaint about a post on the organisation’s Facebook and website.

It added that the campaign for justice will continue:

LICADHO continues to call for an investigation into the violence, deaths and disappearance that occurred on 3 January 2014, and will continue to commemorate Veng Sreng violence each year to prevent further violence from occurring in the future.

LICADHO continues to call on the government to respect freedom of expression for all Cambodians, including activists, artists, and civil society members.

The artist who wrote the song expressed disappointment over the authorities’ reaction:

I feel so much regret.

The song did not do anything wrong. … I feel regretful. It should be that the listener can judge whether the song is right or wrong.

Chin Malin, a spokesman for the Ministry of Justice, told the media that the 2014 strike was not legitimate:

They were not legitimate protests that demanded workers’ rights, as some claimed, but an obvious attempt to inspire widespread disorder and incite people to overthrow the government. The authorities had no choice but to crack down on the violent protesters in order to protect the legitimate government.

He also defended the decision to ban the music video:

Therefore, it is clear that the authorities did the right thing in this case by educating these organisations. If they had not heeded the police’s warnings, the courts would have had no choice but to prosecute them in order to protect the government.

But the Center for Alliance of Labour and Human Rights, or CENTRAL, one of the groups summoned by the police, insisted that the video contained images and news clips that have been viewed by many over the past nine years.

The footage has been widely viewed in the nine years since the protests occurred, and has not sparked any violence. Indeed, the song uses the phrase ‘Use intelligence to solve problems’, which speaks to the non-violent solutions that we believe in.

The music video ban signifies the continuing decline of freedom of expression under the government of Prime Minister Hun Sen, who recently threatened to file cases against his critics. Civil society groups CIVICUS: World Alliance for Citizen Participation, Asian Forum for Human Rights and Development, and Asia Democracy Network have issued a joint statement expressing concern about the silencing of dissent in the country:

By blocking the video, the Cambodian authorities have once again chosen to silence freedom of expression and censor the work of civil society in their efforts to highlight human rights violations and seek accountability.

According to Freedom House's annual world freedom index 2022, Cambodia is rated “not free” due to ongoing pressure on journalists, opposition politicians, activists, and state critics.

An unofficial copy of the song is available on YouTube. It can also be found on Spotify. Find out more about banned music around the world through Global Voices’ special coverage Striking the wrong notes, and our accompanying Spotify playlist.