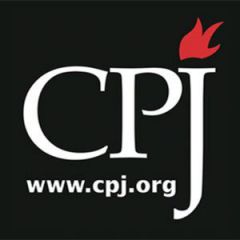 Right to Report campaign image by Committee to Protect Journalists. Free for reuse.

Global Voices is joining more than 60 other media and press freedom organizations in supporting the Committee to Protect Journalists’ campaign for the Right to Report in the Digital Age, targeting the Obama administration. Revelations about surveillance, intimidation, and exploitation of the press have raised unsettling questions about the rights and safety of journalists’ ability to report in the digital age. The revelations also give ammunition to governments seeking to tighten restrictions on media and the Internet.

Although the petition is directed at Obama, journalists around the world are affected, both directly and indirectly. Reports that the NSA and allied spy agencies surveilled journalists–including a report that the NSA hacked Al-Jazeera–create a chilling effect on the press. Border crossing has long posed a risk for journalists, especially with respect to the search of electronic devices.

Recent revelations about mass surveillance of online platforms in Egypt and the UK, surveillance of journalists in Ethiopia, and harassment of journalists and whistleblowers around the world (often under the auspices of anti-state charges) underscore the fact that the issues raised in the Right to Report campaign are borderless. From Azerbaijan to Zambia, governments are targeting journalists with communications surveillance and need little excuse to continue doing so. The NSA spying revelations unquestionably undercut the US government’s legitimacy in arguing to the contrary.

“In Pakistan, where freedom of expression is largely perceived as a Western notion, the Snowden revelations have had a damaging effect,” Sana Saleem, director of the Pakistani digital rights group Bolo Bhi and an author for Global Voices, wrote in a recent blog post for CPJ. “From the policy landscape to the public narrative regarding free speech and privacy, the Snowden revelations have strengthened the state's argument for surveillance.”

The first stage in the campaign is an open petition. The campaign seeks three key commitments from the Obama administration:

Dozens of leading media outlets from the Associated Press to Huffington Post to Vice News, along with professional journalist associations such as the Arab Reporters for Investigative Journalism and the Society of Professional Journalists, and global and national rights groups like Amnesty, Human Rights Watch, and IFEX are all lending their support to the campaign.

Prominent journalists from around the world including Christiane Amanpour, Arianna Huffington, Xiao Qiang and Ahmed Rashid have also signed on to show their support, as well as hundreds of other journalists, bloggers and citizens who recognize that US surveillance and harassment of journalists has an impact beyond national borders.

How can you support CPJ’s #RightToReport in the Digital Age Campaign?

Visit CPJ’s Right to Report campaign page to learn more about the effort and find ways to get involved.