Advox campaigns focus on digital rights around the world. We believe that by giving communities and decision makers the information that they need to understand the threats to digital rights, the challenges that must be confronted, and the opportunities for collaboration, we can organise effectively to protect digital rights for the present and future generations. Here are some of the campaigns we've been involved with and supported. 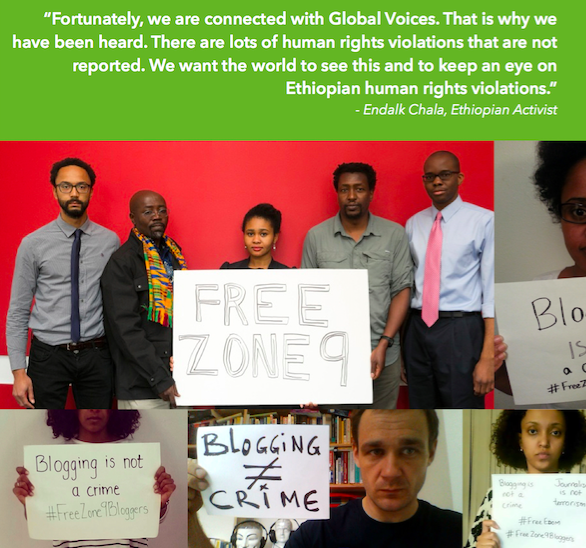 In April 2014, nine bloggers and journalists were arrested in Ethiopia on accusations of “inciting public disorder via social media” and “receiving support from a foreign government.” The detainees had all worked with Zone9, a collective blog that covered social and political issues in Ethiopia and promoted human rights and government accountability. Many of them were also contributors to Global Voices. Our community worked hard to demand the release of our jailed friends and to tell the world their story. We worked with the bloggers’ families and lawyers to report on their experiences behind bars and in court, and to promote their case on social media.

The Global Voices community worked to bring international attention to the prosecution of seven free expression advocates who are facing trial in Morocco due to their advocacy. The seven advocates had sought to defend human rights, hold authorities accountable to the public, and uphold rule of law in their country. Five were charged with “threatening the internal security of the State” and two faced charges of “receiving foreign funding without notifying the General Secretariat of the government.” Among those charged was Hisham Almiraat, a medical doctor and long-time member of our community.

“Who will be next?” Sketch of deceased Bangladesh bloggers by MadhuMondol.

More than ten Bangladeshi bloggers and writers have been assassinated since 2013. Some of the country's most active online writers now fear they may face jail or will die at the hands of the assailants. Some under threat have left the country. Since 2013, we have covered stories about individuals who have lost their lives because of their online writing, and the ways their communities have responded and grappled with this trend.