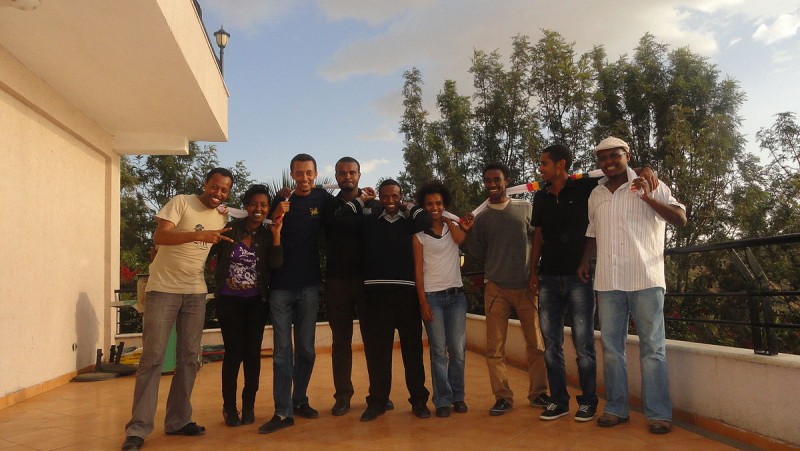 All members of Zone9 in Addis Ababa, 2012. Photo courtesy of Endalk Chala.

On April 25, 2014, nine bloggers and journalists were arrested in Ethiopia on accusations of “inciting public disorder via social media” and “receiving support from a foreign government.” The detainees had all worked with Zone9, a collective blog that covered social and political issues in Ethiopia and promoted human rights and government accountability. Many of them were also contributors to Global Voices.

After spending eleven weeks behind bars, these nine men and women were charged on July 17, 2014 under the Anti-Terrorism Proclamation of 2009. Soliyana Shimeles, a tenth member of the group who resides in the US, issued identical charges in absentia.

Endalk Chala: How Blogging is Held Hostage by Ethiopian Politics

The Zone9ers were working to foster political debate and discussion in a country where most media outlets fall under heavy control by government authorities. They wanted to help fellow citizens better understand their rights, as guaranteed by the constitution. This was plain to see from the contents of their writings and the nature of their research.

The group spent fifteen months in prison. They appeared in court nearly thirty times from July 2014 to June 2015, only to be adjourned each time at the behest of the prosecution, which sought more time to investigate their case.

Authorities lead the male members of Zone9 to court in February 2015.

On July 8 and 9, 2015, five of the nine writers were released from Kilinto Prison in Addis Ababa. All charges against Zelalem Kiberet, Tesfalem Waldyes, Asmamaw Hailegiorgis, Mahlet Fantahun and Edom Kassaye were dropped without warning or explanation, several days prior to Barack Obama's historic visit to the country. Their four colleagues remained behind bars, still facing charges.

Authorities offered no explanation for this sudden change in course, though human rights advocates surmised that the partial release of Zone9 writers an official attempt to deflect mounting criticism about Ethiopia’s human rights record approaching the Obama visit.

Ethan Zuckerman: The Zone 9 Bloggers are Writing from the Outer Ring of the Prison, the Nation Itself 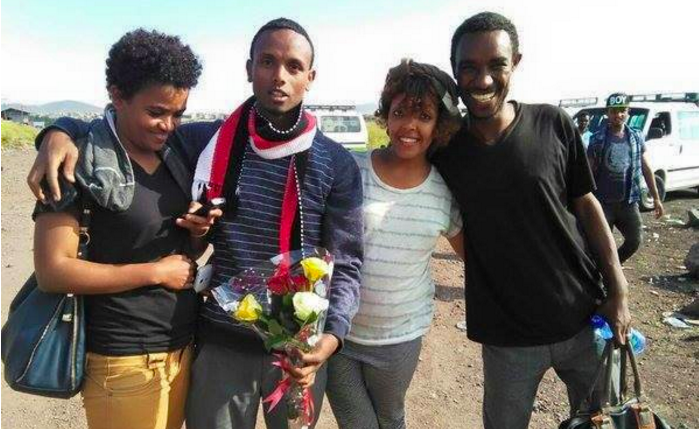 Zone9 bloggers greet Befeqadu upon his release from prison on October 21, 2015. Photo via @miniliksalsawi

Endalk Chala, a Global Voices author and founding member of the group who began a doctoral program in the United States several months before, and thus was spared arrest, was overwhelmed by the news of their acquittal:

I'm thrilled by the news, but the struggle is not over yet. I'm trying to compose myself to understand what happened throughout the entire period of the trial….it's a relief for me and for my colleagues and for all of us, but still there is a lot of work to do.

Despite their circumstances, the Zone9 bloggers remained strong, determined, and vocal during this time, both inside and outside of prison.

The case against Zone9 A counter-terrorism measure developed with the support of the United States government, Ethiopia's Anti-Terrorism Proclamation is one of many laws around the world that was written after September 11, 2001 to target the proliferation of large-scale violent extremist groups. From Bahrain, to Nigeria, to the United States, governments across the globe have used such laws to silence journalists and people advocating for human rights in an entirely peaceful manner.

The bloggers reported that they were tortured and mistreated in prison, but the full extent of their experience has yet to be documented publicly.

In August of 2014, Befeqadu Hailu, a founding member of Zone9 and Global Voices author, wrote a detailed account of his experiences behind bars, a text that was smuggled out of the prison and published on our site. “No matter what,” he wrote, “boundaries exist in this country. People who write about Ethiopia’s political reality will face the threat of incarceration as long as they live here.”

Read: Journal from an Ethiopian Prison: Testimony of Befeqadu Hailu

In autumn of 2014, friends were able to smuggle out a letter from Natnael Feleke, a founding member of Zone9 who studied economics before his arrest, is addressed to US Secretary of State John Kerry. Natnael spoke with Kerry at a public event at Addis Ababa University in 2013, a meeting that has now become part of the case against him. In the letter, Natnael asks the US government to reconsider its support for the Ethiopian government. He wrote:

…[the amount of] time I will be spending in prison is not the most pressing issue on my mind right now. Rather, I am worried about the amount of additional sacrifice required until the international community, specifically your government, will assume a firm pragmatic stance in demanding fundamental progress in the democratization process of the country against the billions of dollars pouring the regime's way.

Read: A Letter to John Kerry from Kilinto Prison, Ethiopia

The Global Voices community holds the Zone9 case especially close to our hearts as four of the detainees are members of our community who led efforts to translate Global Voices stories in Amharic, the dominant language of Ethiopia.

Since the day of the bloggers’ arrest, our community worked hard to demand the release of our jailed friends and to tell the world their story. We campaigned online, at public forums, and on the ground because we believe that shining light on their case would make a difference and could help to set them free.

While we celebrate their release and acquittal, we believe the Ethiopian government must be held accountable for the unjust treatment of these brave writers and the many other journalists and human rights advocates imprisoned in the country. We vow to keep pushing to protect human free expression in Ethiopia and around the world.

BREAKING: Three Ethiopian Journalists Freed From Prison, But Others Remain Behind Bars July 8, 2015

Edom Kassaye: An Ethiopian Journalist Jailed for Her Integrity July 6, 2015

An Official White House Visit to Ethiopia? Africans Tell Obama ‘Don't Do It!’

Message to an Ethiopian Blogger: Mahlet Fantahun, You Are Not Alone May 21, 2015

Ethiopian Blogger Atnaf Berahane: Young, Courageous, and in Jail May 15, 2015

“We Cannot Trample Upon the Humanity of Others Without Devaluing Our Own” May 4, 2015

A Year After Their Arrest, Ethiopia's Zone9 Bloggers Remain Strong and Determined April 24, 2015

“Take the Right Side in the Struggle of the Oppressed”: A Letter to John Kerry from Kilinto Prison, Ethiopia April 24, 2015

How Blogging is Held Hostage by Ethiopian Politics, April 20, 2015

Bloggers Behind Bars: Ethiopia's Zone9ers and Threats to Online Speech Across the Globe Oct. 18, 2014

Journal from an Ethiopian Prison: The Maekelawi Ceremony Oct. 15, 2014

Journal from an Ethiopian Prison: Testimony of Befeqadu Hailu Oct. 14, 2014

“The Zone 9 Bloggers are Writing from the Outer Ring of the Prison, the Nation Itself” July 31, 2014

Why Blogging is a Threat to the Ethiopian Government May 11, 2014

STATEMENT: Global Voices Calls for the Release of Nine Journalists in Ethiopia May 2, 2014