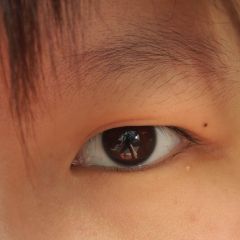 This is the part one of a trimmed version of an interview with Wu Tun, an online shop owner whose Taobao shop was forced to shut down in November 2014. The interview was conducted by Yi Que Tang and originally published in Chinese on pao-pao.net on February 10, 2015. The English version was translated by Mandy Wong and republished here under a partnership agreement with Global Voices.

Last November, as other vendors celebrated record sales numbers on Chinese online shopping platform Taobao, 28-year-old artist Wu Tun was forced to “permanently shut down” his T-shirt shop on Taobao. After just four days of business with 10 T-shirts sold, Wu’s venture was abruptly closed because of one particular T-shirt that displays a brick wall with big letters reading “愛 Can’t Be Here” printed on top. The Chinese character means “love” – its transliteration, “Ai.”

Wu had created a simple T-shirt design as part of Ai (Love) Can’t Be Here, an online action expressing support for Ai Weiwei, the world famous dissident artist who has been under house arrest in China since 2011. “I decided to support and participate in it when I learned about it,” said Wu, “I thought it was a subtle expression to support Ai Weiwei and didn’t expect that the censorship authority would find me. The sensitive political environment makes it impossible for both Ai (Ai Weiwei) and ai (love) to exist.”

But Wu did not stop supporting Ai Weiwei. He was determined to carry on the endeavor of selling T-shirts.

Ai’s passport has been held by police officers since 2011, so he can’t travel abroad. I wish my effort could raise more people’s awareness about his status. I am also doing this for myself. My online shop was forced to shut down because of the t-shirt. I still want to re-produce the t-shirts and am searching for shops that are willing to sell them.

Wu created a page on Indiegogo, the second-largest crowd-funding platform in the US, with a description on the project and a promotional video. The Great Firewall has not blocked the site, so the content is accessible in mainland China. But the video content, which is hosted in YouTube, cannot be viewed.

Wu wishes that his video could be viewed by more Chinese netizens because it explains his concern and support for Ai Weiwei and criticizes Internet censorship practices in mainland China. Late one night in early February, he uploaded the video on Youku, a Chinese version of YouTube, hoping that the video clip would be stay up longer if posted at night and thus reach more people. But he found the video deleted the next morning.

Wu was furious, actively witnessing censorship as it became more and more stringent:

Among the post-1985 generation, I began using the Internet a bit earlier than others. I started searching stuff online when I was a junior secondary school student in 1999. At that time, I searched for things like music, fashion, games, and other things young people are interested in. Suddenly, many websites were blocked for unknown reasons. Later, I learned that Fang Binxing (lead developer or “Father” of China’s Great Firewall) and his GFW were working behind the scenes. Imagine having to use a VPN to break the “wall” just to watch a video. The shutdown of my Taobao shop is a similar story. While we realized that “Ai Weiwei” is a forbidden term in China, I changed Ai's Surname to Love, but the authorities still shut down my shop. Friends from overseas asked me the reason and I didn’t know how to explain…

Wu started using a VPN to circumvent censorship, but new restrictions on VPN use in China left this effort similarly fraught. “I need to access Twitter, VPN is essential for Chinese Internet users,” Wu stated. “To post a kitten photo on Twitter is now a luxury as you have to try really hard.  If your smartphone gets connected to a VPN, you feel like you won in a lucky draw.”