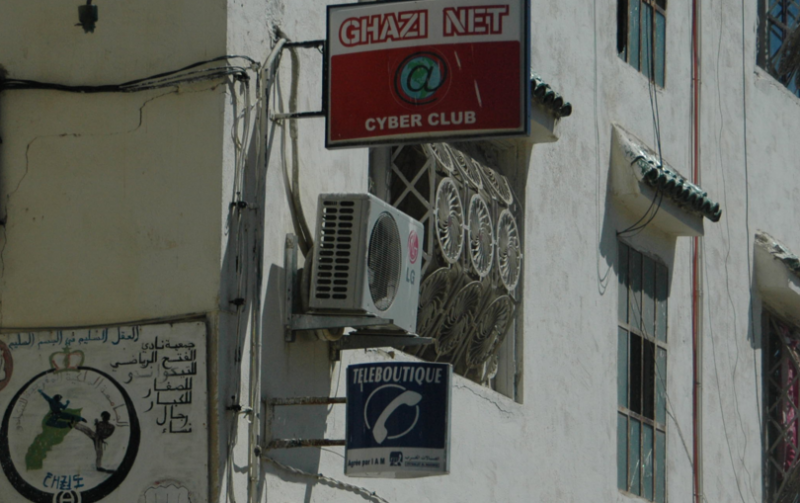 Photo of Fez Cybercafé by Maureen, CC BY 2.0

Police arrested activist Ibrahim Karimi for his alleged involvement in managing the Twitter account “FreejKarimi”, which shares news related to the human rights situation in Bahrain and other Gulf countries such as Saudi Arabia.

The Committee to Protect Journalists (CPJ) addressed a letter to President Abdel-Fattah el-Sisi, urging him to release all imprisoned journalists. On 23 September, Sisi pardoned Al-Jazeera journalists Mohamed Fadel Fahmy and Baher Mohamed. However, several other journalists still languish in jail.

After more than two years in jail, photojournalist Mohammed Abu Zeid—known as Shawkan—is set to go on trial on 12 December. Shawkan was arrested in August 2013 while covering clashes between Egyptian security forces and supporters of ousted president Mohammed Morsi for the citizen photography website Demotix. Along with more than 700 other defendants, Shawkan stands accused of accused of belonging to a banned group, murder and attempted murder.

Cairo Scene interviews outspoken Egyptian atheist Sherif Gaber, who in 2013 was arrested for running what the authorities described as an atheist Facebook page.

On 14 September, the Iraqi parliament approved a bill requiring the telecommunications ministry to filter pornography. In late July, 150 parliamentarians signed a petition to censor adult content inside the country.

Internet freedom in Iraq is threatened as both ISIS and the government seek to control the networks. While ISIS controls the internet in areas under its control, the government previously resorted to blocking entire and social networking sites, allegedly to combat the terror group’s online propaganda. Meanwhile users continue to face high internet subscription costs and daily outages.

Satirist Omar Zorba was released from jail, after a former prime minister and his son dropped a defamation lawsuit against him. Zorba was arrested on 15 September over a Facebook post in which he criticized  excessive spending in the wedding party of  Amjad al-Dahabi, the son of former prime minister Nader al-Dahabi. Zorba who did not mention the son by name, wrote: “half a million JOD (705,200 USD) for the son of former minister’s wedding party in the most luxurious five star hotel in Amman—the preparations alone cost 300,000 JOD (or 423,100 USD)”.

On 18 September, the Special Tribunal of Lebanon (STL) in the Hague, which is investigating the 2005 assassination of PM Rafik Hariri, convicted Al-Jadeed TV journalist Karma Khayat of contempt of court and obstruction of justice for refusing take down from the station’s website and YouTube account reports originally aired in August 2012. The STL deemed the reports endangering to witnesses, while Khayat said they aimed at highlighting the court’s problems. Though Khayat was acquitted from the charge of endangering witnesses, she still faces up to seven years in jail.

On 21 September, the Lebanese army arrested a woman after she spoke about her alleged rape to local media. In an interview posted on 4 September on the news site NOW, Layal al-Kayaje revealed that in 2013 two members of the military raped her while she was in detention for expressing on Facebook her support to hard-line cleric Ahmad al-Assir. The Lebanese army claimed that al-Kayaje was detained after confessing to lying about being raped.

On 11 September, a primary court in the city of Marrakech sentenced editor of the news site hibapress.com Kamel Krouu and its director Mohamed Lekbir to 10 months in jail each for defaming Marrakech governor in an article publised on the site.

On 17 September, Reporters Without Borders expressed its concerns about the state of freedom of expression and information in Morocco. Since the start of the year, several journalists have faced harassment and prosecutions for criticizing the government or reporting on wrongdoing by officials.

On 8 September, police in the city of Casablanca interrogated Hisham Almiraat and Karima Nadir—respectively president and vice-president of the Association of Digital Rights (ADN)—following a lawsuit filed by the interior ministry.They are both accused of making false accusations, denigrating the State, and contempt of a constituted body over the association’s role in the publication of “Their Eyes On Me”, a report that sheds light on the authorities’ surveillance of journalists and rights activists. They have also been placed under travel bans.

Omani lawyers Riyadh Al Balushi and Yousuf Al-Busaidi launched qanoon.com, a platform that publishes Omani laws and make them available to the public.

Saudi Arabia has been appointed to the UN Human Rights Council, prompting widespread fury. Ensaf Haidar, the wife of imprisoned pro-democracy blogger Raif Badawi, told the Independent that the appointment was effectively “a green light to start flogging [him] again”. Reporters Without Borders was one of several rights groups to condemn the decision.

Hundreds of Facebook pages are reportedly being monitored by the authorities over terror links. According to ICT minister Noomene Fehri, the number ranges between 500 and 1000. He also added that 200 websites, mostly hosted outside Tunisia, are also under surveillance. Following two deadly attacks targeting foreign tourists this year, the government stepped up its efforts to combat individuals or groups supporting terror activities or groups online. According to lawyer Samir Ben Amor, following the 26 of June resort attack in Sousse, at least 50 cases were filed against users who posted online comments questioning official government accounts. Ben Amor represents Facebook user and mathematics teacher Abdelfatteh Saied who has been in jail for more than two months for alleging on Facebook that the Sousse attack was a conspiracy.

On 16 September, police union leader Walid Zarrouk was arrested after a libel complaint filed against him by judge Sofiane Selliti. The judge accuses Zarrouk of defaming him on Facebook. Zarrouk’s Facebook page seems to have beenremoved. In a separate case, Zarrouk was sentenced in absentia to one year in jail last May, over defamation of a state prosecutor in a 2013 Facebook post.

On 30 September, police officers assaulted Nawaat journalists Arwa Barakat and Mohamed Ali Mensali, while they were covering a protest against a controversial corruption amnesty bill. According to Nawaat, Mensali was detained and only released after police made sure he deleted footage showing them beating protesters.

Digital Citizen is brought to you by Advox, Access, EFF, Social Media Exchange, and 7iber.com. This month’s report was researched, edited, and written by Afef Abrougui, Jessica Dheere, Mohamed ElGohary, Thalia Rahme and Jillian C. York and translated into Arabic by Lara AlMalakeh, Mohamed ElGohary, and Mohammed Tarakiyee, and into French by Thalia Rahme.