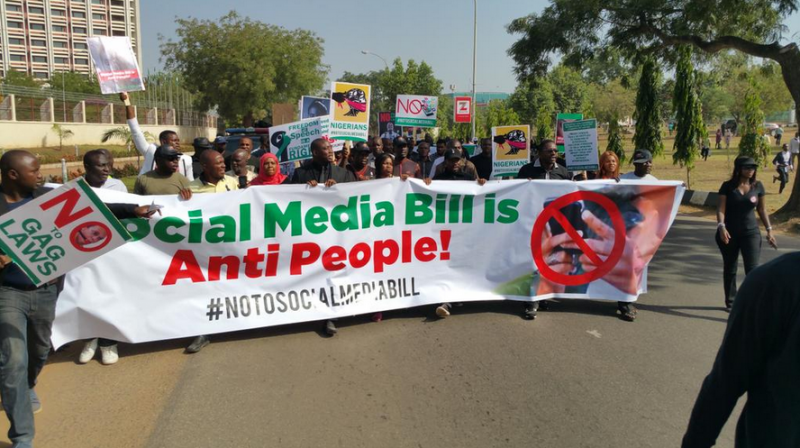 Nigeria's social media landscape may face dramatic changes, if lawmakers get their way with a new bill that would make it a crime to express “abusive statements” on the Internet and mobile apps. It would also criminalize distribution of “false information” online as well as “inciting the general public against the government through electronic message.”

The bill is being sponsored by Senator Ibn Na’Allah, the representative from Nigeria's Kebbi South Senatorial District. The bill has reportedly passed its second reading.

The bill appears to be aimed at silencing trends of violent extremist activity in the country, as well as more common online bullying, but critics have been quick to note that it easily could be used to silence political speech or protest movements. Regarding social media, the legislation states:

Where any person through text message, tweets, WhatsApp or through any social media post any abusive statement knowing same to be false with intent to set the public against any person and group of persons, an institution of government or such other bodies established by law shall be guilty of an offence and upon conviction, shall be liable to an imprisonment for two years or a fine of N2,000,000.00 [about USD $10,000] or both fine and imprisonment.

The law also would punish “anyone who intentionally propagates false information” as well as incitement of anti-government speech with up to seven years in prison.

The next day, Senate President Dr. Bukola Saraki denied that the Senate was voting on new social-media legislation, saying:

We have only debated the Principle of the bill, we have not gone into the details of the bill, so if there is any part of the bill that does not conform to human right, be rest assured that the senate will do the proper thing. So there was no bill that was brought forward called social media bill.

The bill does have opponents in the government. Abdulrazak Namdas, the chairman of the House of Representatives Committee on Media and Publicity, expressed his disapproval at a State House Speakers correspondents dinner on December 8, 2015.

Dear Nigerians, go to sleep & stop worrying; nobody is going to send social media users to jail through the senate. It will not happen. #GA

JJ. Omojuwa, one of Nigeria's top social media influencers and a columnist, wrote:

Everyone who values his or her right must express a resounding #NoToSocialMediaBill — JJ. Omojuwa (@Omojuwa) December 2, 2015

A government looking for ways to cripple freedom of speech and expression is slowly becoming tyrannic. #NoToSocialMediaBill

“Mr. Chairman” did some number-crunching:

BudgIT NIgeria, a civic-technology organisation, had harsh words for the public officials behind the draft law, who seem to be unable to bear a little public criticism:

PUBLIC OFFICE is NOT mandatory. If you don't want criticism, please still to your private business. #Askquestions #NoToSocialMediaBill

Chijioke Kaduru, a medical doctor, suggests that the judiciary needs to be strengthened, instead of crippling freedom of speech:

If someone has made a libelous comment, sue the person. If you think the courts don't work, strengthen the judiciary #NoToSocialMediaBill

A spokesperson for Nigerian President Muhammadu Buhari has affirmed the president's commitment to free speech:

Commenting on the bill, Hilary Matfess, a researcher at the Center for Complex Operations at the National Defense University, noted that the proposed bill follows an undemocratic trend in Sub-Saharan Africa of legislation cracking down on Internet freedom.