China's 2nd World Internet Conference Will Focus on ‘Rule of Law’, But Not Free Expression 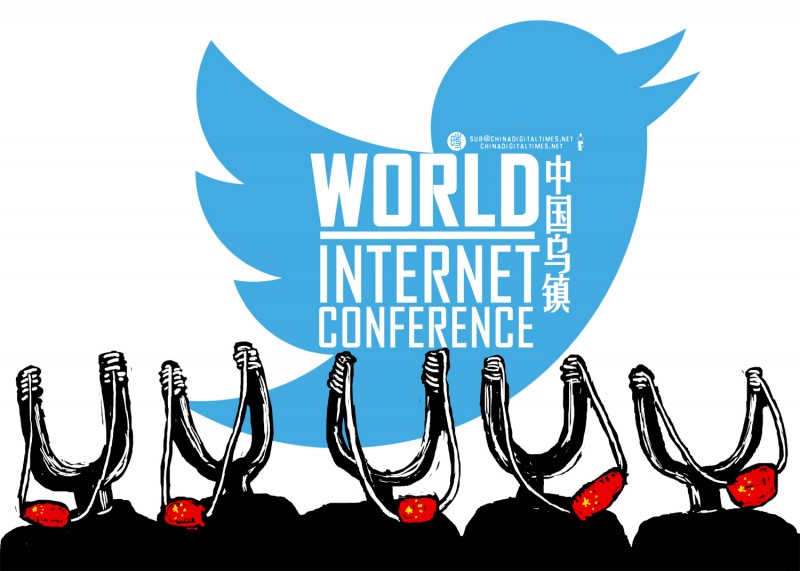 Graphic used coverage of the first World Internet Conference in 2014, by Badiucao for China Digital Times. Used with permission.

The second World Internet Conference (WIC) hosted by China will begin on December 16 in the ancient water city of Wuzhen. The CEOs of local giants Alibaba, Tencent and Baidu are expected to attend, along with executives Apple, Amazon, Google, Facebook, and Huawei.

The conference bears the theme: “An Interconnected World Shared and Governed by All: Building a Community of Common Future in Cyberspace.”

In the aftermath of the Paris attacks and amid rising global fears of violent extremism, it is anticipated that China will use the conference to promote cybersecurity and Internet sovereignty — the idea that governments have the right to control their country's Internet space.

Xinhua, a mouthpiece for the Chinese government, published an opinion piece ahead of the conference setting the stage for discussion, identifying cybersecurity as an “Achilles heel” of the Internet, and indirectly accusing the United States of using China a scapegoat for its own technological shortcomings.

First, the almighty warrior Achilles was killed for his unblessed heel. Our Internet, though seemingly as mighty as Achilles for its broadness and powerfulness, has more than one heel that is unprotected, among which, the cybersecurity is the weakest. If they want to do something, they better do it now.

Second, cybersecurity must never become another farce of the China threat. Cybercrime is a common threat for countries all over the world. If a certain power from West decides to seek cyber hegemony by portraying others as a scapegoat for its own technological arrogance and zero-sum mindset, it is squandering hard-won mutual trust among different cyber communities around the globe and putting the common destiny of cyberspace in danger.

Chinese President Xi Jinping will deliver a keynote speech to 2,000 influential figures including eight state leaders (from Pakistan, Russia and Kazakhstan, among others), 50 ministerial-ranked officials, 20 leaders from international organizations and more than 600 experts from Internet companies around the world.

Xi's view on the Internet was presented ahead of the conference in a Xinhua column translated by China Media Project:

Even as Internet technology continues to develop, the information autonomy of no country can be violated. In the information sphere, there are no double standards, and every country [has the right] to defend its own information security. It must not be the case that one country is secure while others are not, or that some countries are secure while some others are not. Nor can [a country] seek its own so-called absolute security while sacrificing the security of other nations.

…this ‘new frontier’ (新疆域) is not ‘a realm outside the law,’ and it too must respect rule of law, it too must preserve national autonomy, security and development interests.

Rule of law or suppression of free expression?

However, the implementation of the “rule of law” in China as related to the Internet is different from other countries.

The recent trial of human rights lawyer Pu Zhiqiang, who is charged with “inciting ethnic hatred” and “picking quarrels and provoking a disturbance” based on a few tweets he wrote on social media platform Weibo, is one example of this “rule of law,” in action. @majunlive tweeted:

#PuZhiqiang should be put on trial at Wuzhen. The indictment of lawyer Pu was based on seven tweets that he wrote. [The principle of the charges against him] is similar to what is advocated at the World Internet Conference. How can a group of squid know how to rule the sea?

But as Bill Bishop, editor behind the free newsletter Sinocism, pointed out:

which US internet execs will be bootlicking at the Internet conference in Wuzhen? How many of them even know who pu zhiqiang is?

Benjamin Ismail, the head of Reporter Without Borders’ Asia-Pacific desk, argued that the event was intended to “preempt any discussion of media freedom”:

China does more than ‘manage the Internet.’ It closely monitors all information accessible to Internet users and systematically blocks any criticism or revelations that are embarrassing for the Communist Party.[…] Coming ahead of the World Internet Conference, the sole aim of this manipulation attempt is to preempt any discussion of media freedom and freedom of information.

The media rights advocacy group has called for a boycott of the conference. As Ismail put it: “These conferences have had no credibility ever since the first one, whose real aim was to ensure that Internet companies wanting to operate in China fall into line.”

Attendees will probably experience Chinese-style security measures being taken for the conference:

The Wuzhen Internet conference is now under the first rank stability control. A report from a netizen: “There are only about 10,000 residents in Wuzhen, but security control personnel are now up to 40,000.

And if the event is anything like last year's conference, participants will not likely be exposed to any type of dissent:

During the first World Internet Conference, seven warriors held protest banners and called for a free Internet. Today, apart from Yang Xiuqiong, the six others — including Wang Jing, Zhang Jixin, Yang Dongying, Gu Guoping, Xiao Jianfang, Wei Wenyuan — are in jail [for participating in other peaceful petition actions]. Let's give our blessings to the six warriors ahead of the 2nd World Internet Conference.

Last year, the organizers of the first WIC attempted but failed to ratify a conference declaration calling on international communities to “respect Internet sovereignty of all countries” and devote themselves to “spreading positive energy” online. Though China's Minister of Cyberspace Affairs Administration Lu Wei has asserted that the organizers won't propose any official declaration this year, many still worry that Internet companies will accept the “China model” of Internet governance in order to gain access to the huge market that the country represents.