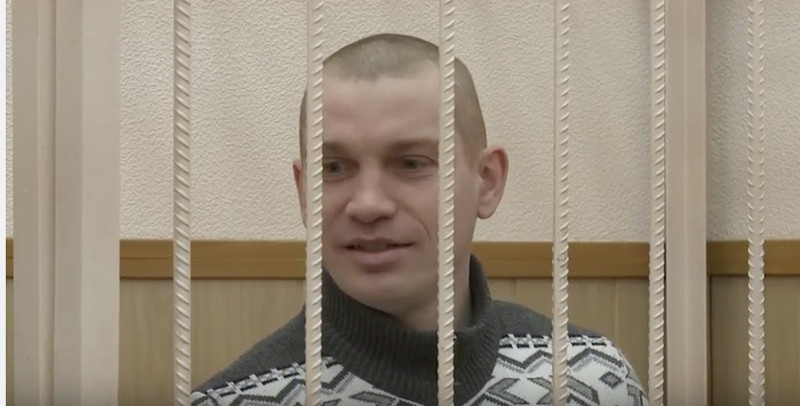 Vadim Tyumentsev in court as his verdict is being read. Screencap from YouTube video, courtesy of Radio Liberty.

A Russian blogger in the city of Tomsk has been convicted of publishing hate speech and calls to extremism online and handed a five-year prison sentence, after posting several videos to YouTube and VKontakte.

The Tomsk district court has found Vadim Tyumentsev guilty under two articles of the Russian criminal code—Article 282 (“actions aimed at inciting hate or enmity”) and 280 (“public calls to extremist activity”)—and sentenced him to a five-year term in a penal colony. The court also forbid the blogger to publish any content online during the three years after his sentence ends.

According to a Radio Liberty report, the criminal case against Tyumentsev was launched in February 2015, when the prosecutors found fault with two videos the blogger had posted to YouTube and to his profile on Russian social network VKontakte, some of which included rants about the crisis in Ukraine and increased numbers of refugees coming into the country.

Tyumentsev had posted dozens of videos on both platforms, but court reports do not indicate which videos the judiciary found fault with.

The investigators accused Tyumentsev of “animosity towards citizens residing on the territory of Luhansk and Donetsk regions of Ukraine” and of “inciting hatred towards persons with refugee status in Russia.” The prosecution also claimed the blogger went online to call for participation in an unsanctioned peaceful rally and used the Internet to criticize the local authorities. Tyumentsev's lawyer noted that the calls to participate in the rally “cannot be deemed extremist” and that the local officials were public figures and therefore were liable to receive public criticism according to Russian legislation.

The Tomsk blogger does not have a large base of followers on either platform, but has engaged in activism both on and offline in the past. In August 2014 he participated in the “March for Federalization of Siberia.”

Tyumentsev's sentence is unusually harsh in comparison to other similar cases, which often end in suspended sentences. But it may fall in line with a recent trend of real prison terms for things like unsanctioned protests and online activity.

Tyumentsev himself refused to plead guilty in court and said he had initially signed a confession under pressure from the Russian FSB (federal security services). The blogger called for a repeat linguistic analysis of his online content and claimed the analysis used to indict him was “a twisted interpretation” of his words. The court refused Tyumentsev's demands. The blogger's lawyer has already filed an appeal with the court.