Who Protects the Rights of Russian Internet Users? Not These Guys. 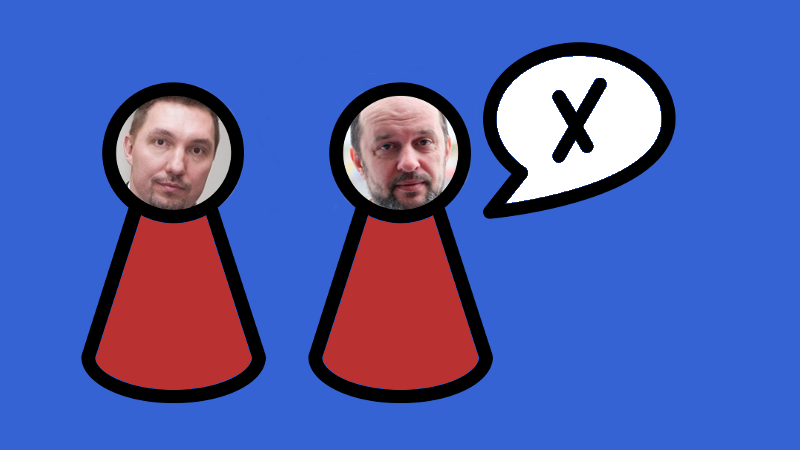 Russia's Internet ombudsman and Putin's Internet advisor want nothing to do with user rights. Clipart by Till Teenck for the Noun Project. Images mixed by Tetyana Lokot.

We already knew the Russian government wasn't feeling too charitable toward Internet freedom, what with the far-reaching plans by Russian state censor Roscomnadzor and other state bodies to continue tightening their grip on the RuNet. But while everyone and their mom wants to regulate and restrict online communications in Russia, not many government officials or even quasi-independent Internet experts are rushing to take the side of the users.

Case in point: apparently, neither Russia's Internet ombudsman Dmitry Marinichev nor the newly-appointed Internet advisor to the Russian President German Klimenko believe they are in any way responsible for defending the rights of Internet users in Russia. Instead, they suggest someone else—say, human rights advocates—should stand guard on the issue of user rights.

In a January 10 Echo Moskvy interview Klimenko (profiled by Russian news website Meduza after his recent appointment as Vladimir Putin's Internet advisor) flat out refused to concern himself with free speech or copyright issues online.

Earlier, Klimenko made waves on social media after stating in a TV Rain interview that he thought the Telegram messenger would “either cooperate (with the Russian government) or be shut down.” At the start of January 2016 Klimenko chatted with BBC Russian and told journalists he believed Russia would benefit from a digital Iron Curtain. “If we close the virtual borders, all our websites win. Yandex wins. Mail.ru wins,” Klimenko said, accusing Google, Facebook, and other international Internet companies of “gobbling up our advertising market.” Klimenko told the BBC his work as Putin's new advisor would mostly focus on moderating communications between lawmakers and the Internet industry, channeling state spending on software, promoting online payments and e-education.

Curiously, the Russian Internet ombudsman Dmitry Marinichev, whom Klimenko namechecked in his interview, also shrugged off the mantle of responsibility for the rights of Russian Internet users, in a comment to industry website vc.ru:

I work with the issues of Internet and IT businesses based on their appeals. In the majority of cases these are issues common to the industry, and the complaints from companies are collective. Most often they're connected to the new legislative initiatives.

The human rights advocates, who both Klimenko and Marinichev point to in their comments, have been sounding the alarm about the growing number of restrictive norms regulating online speech and activity in Russia and condemning the increasingly harsher sentences for violating those norms. Posting images, text, and videos online, accompanied by charges of extremism or hate speech, have already led to real prison terms for users such as activist Darya Polyudova and blogger Vadim Tyumentsev. Those who are fighting for Russian Internet users’ rights fear that these verdicts are only the beginning of a bigger crackdown.