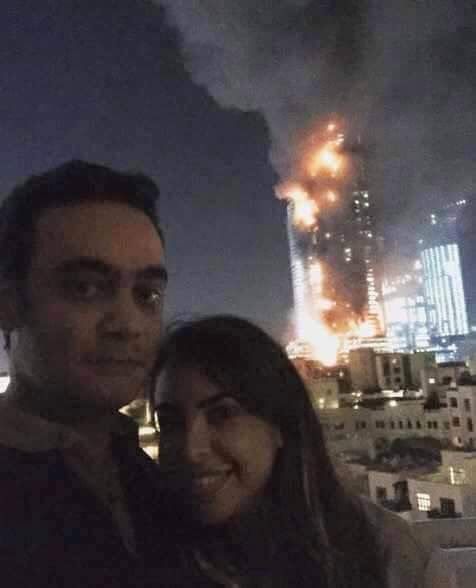 This selfie by a Kuwaiti couple, shared on Instagram, was described as the “most inappropriate selfie” ever. Two other people who posted selfies of themselves were detained and then released

Two men who posted their selfies on social media with Dubai's 63-storey The Address hotel on fire in the background were arrested — and then released, according to WAM, the United Arab Emirates official news agency.

The Attorney General said that the Public Prosecution in Dubai has decided to release the two young men following a thorough investigation and review of the posted picture and case file and after listening to all witnesses.

The Public Prosecution has closed the case since no evidence of criminal intent has been established against the young men.

The Attorney General called on individuals to exercise caution and discretion when posting any material on social media and refrain from spreading rumours, defaming others or violating other people’s freedom so that they do not breach any laws.

No further news is available about the identity of the two arrested or the photographs they shared.

The fire, on New Year's eve, engulfed the 300m tall (1,000 feet) luxury hotel, located near the world's tallest skyscraper Burj Khalifa. At least 16 people were injured in the fire, with no deaths reported.

On YouTube, Kirill Neiezhmakov shares this time lapse of the fire:

A Kuwaiti couple were also called out on social media for posting their selfie with the burning inferno in the background on Instagram with the following message:

“Happy New Year my dear Dubai. May God bless you and keep you safe. You always surprise us with the biggest fireworks.”

Comments on the post included “most inappropriate selfie ever.”

Despite the fire, a massive fireworks display took place in the nearby Burj Khalifa.