Internet Censorship in Pakistan is Not Just About YouTube 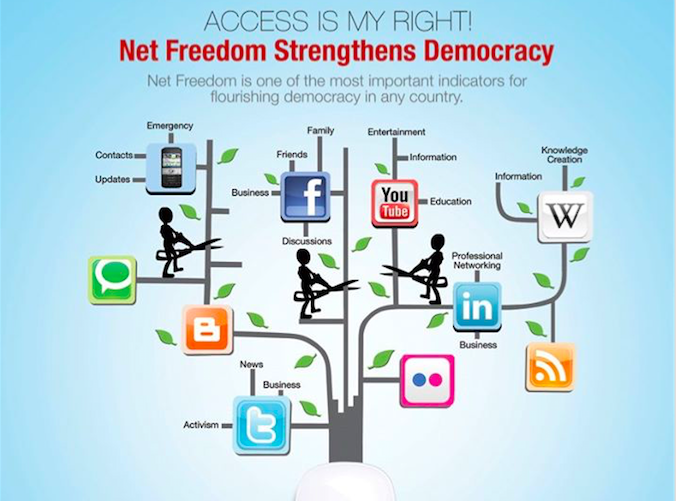 “Access is My Right” campaign poster by Bytes4All. Artwork by Anny Zafar.

This essay was originally published on The News. It is reproduced here with permission.

“The day after Zia died was the day I managed to get a landline for the first time in five years. Before that I would struggle to stay in touch with my colleagues and it made my reporting much more difficult,” late veteran activist and journalist Najma Saddeque reminisced as I sat in her office to talk about the Women’s Action Forum.

“This was the best way to make a reporter’s work more difficult; no need to censor it directly. Just make it difficult for them to do their work,” said Saddeque.

This was the time of mysterious blank boxes appearing in place of stories that were chunked out, declared unfit for public consumption, a time where every news story was closely monitored and “vetted out”.

Decades later, have things changed for the better? Seemingly so, but we are not far from reverting back to telling half-truths, a watered-down, heavily scrutinised version of reality. Take for instance, the crackdown on freedom of information online that has consistently gotten worse. As with traditional media, the state maintains that this is done to “protect” the public and our national integrity.

When rights groups and citizens took the state to court over the blocking of YouTube, the presiding judge, Justice Mansoor Ali Shah, shared their anguish over the state’s ambiguity. The right to information cannot be crippled in the garb of national security, morality or religion. And if it must be done, the restrictions imposed must be “reasonable”.

Is there a way to block objectionable content and make the rest of the website available? What protections are there for a foreign company, like Google, facing this situation? What would it take for a company to comply with Pakistani laws?

YouTube was blocked as a result of a blasphemous video posted on the platform. There was no way to make the rest of the website available while blocking just that video. This would have required a bifurcation of the secure HTTPS layer of the Internet – a step even the Pakistan Telecommunications Authority was strictly against. And no, Pakistan does not have intermediary liability protection nor does it have sufficient laws governing how Internet content is regulated. If at all, Internet regulation in Pakistan has been based on ad-hoc decisions that are made in the absence of transparency and accountability.

When the question of unblocking YouTube was discussed at length, Justice Mansoor Ali Shah reached out to Google to ask what it would take to establish a localised version of YouTube in Pakistan. The answer: a clearly-defined content take-down procedure, a legal framework and strong business interest for Google.

So now we have it: Pakistan has a “localised” version of YouTube. Now, should the company receive and approve a court order requesting that certain content will be blocked, it appears that it will comply.

Nevertheless, three years after the initial blocking, nothing has actually changed on the legal front, except that the Interministerial Committee for Evaluation of Websites – an Orwellian authority that was supposedly responsible for taking down online content – has been disbanded by the orders of the prime minister. On top of this, the Ministry of IT has been pushing to pass one of the worst cybercrime laws in the region.

The Supreme Court, on the other hand, is currently considering the futility of the ban and the state’s ad hocism in implementing it. This case alone could change everything for free speech in Pakistan by strongly scrutinising state-sanctioned censorship done under the garb of regulation.

But will it? Not if the government continues to muddy the narrative by putting up a big show and getting a big corporation to cave in. Not when Google itself would consider launching in Pakistan, despite its earlier commitment to transparent and accountable legal frameworks.

The PTA has informed the Supreme Court that the government should quickly move to lift the ban on YouTube because the offensive video will no longer be available on the .pk version of the site. That the only reason the ban was in place was because of the presence of the video itself.

But this is about much more than just the YouTube ban being lifted. Three years of struggle and demand for self-regulation over state-sanctioned blocks have swiftly been brought to a halt. There is at the moment a space for a debate on the merits of censorship in Pakistan, and the ridiculousness and futility of Internet filters. This debate is taking place in the highest court of law. This is our opportunity to have these discussions out in the open, to test laws and push back against crackdowns. It is an opportunity to reclaim space and deny hurdles that limit our access to information.

There are even more questions, what happens if the cybercrime law is passed? Will Google be asked to provide user information? Will criminal action be taken against political dissenters? Will people be charged and put in jail for up to seven years because of a flawed law? Who will hold the companies responsible for localisation in a country where the Ministry of IT is bringing in a law that would work towards criminalising citizens rather than protecting them?

There are some who celebrate the decision, possibly because the site may now be accessible to those who were not tech savvy enough to use proxies. But for a lot of us, this was never about YouTube alone. It was – and is – about the state’s control over our morality, religiosity and national identity.

With or without YouTube, it is up to each of us to determine whether we would like to think critically and claim our right to unhindered access to information, or embrace a state-crafted version of it.