The video apology of Taiwanese K-pop performer Chou Tzuyu over a previous online video in which she held the flag of the Republic of China (the name by which Taiwan is internationally known) has taken an unexpected turn. It has morphed into a spontaneously organized movement by mainland Chinese netizens, via Facebook, intended to “destroy pro-independence elements in Taiwan through civilized methods”.

As Taiwanese netizens had prepared for their visits, the crusade ended up becoming an entertaining war of emoji and a lesson in the ways of the open Internet for those Chinese who participated.

While Taiwanese consider the teenage performer to be a victim of mainland Chinese netizens’ bullying, the trolls claim that pro-independent forces have made use of the incident to create cross-strait conflict. China doesn't recognize Taiwan's de facto independence, which stretches back to the late 1940s, when the defeated Kuomintang forces retreated to the island at the end of the Chinese civil war.

Feeling frustrated, the administrator of a popular forum within the umbrella of Web giant Baidu, Emperor Ba, decided to mobilize its community members on an expedition to three Facebook targets — the pages of Sanlih E-Television, Taiwan Apple Daily News and the newly elected President Tsai Ling-Wen.

According to the record in Baidu, Emperor Ba has around 20.5 million members; the population in Taiwan is 23.4 million. Though the movement was self-organized and participants had to climb over the Great Firewall in order to visit blocked sites themselves, it's likely that their action wouldn't have taken place without a nod from mainland Chinese authorities.

The action was set for 7 p.m. on January 20. According to one participant who did an interview with website Pingwest, the coordination team urged the virtual soldiers to adopt a “fun” strategy:

Post interesting messages like food or tourist sites, only curse at the independence advocates, not Taiwanese fellows. Talk reasonably to foreigners. ‘We are to persuade brothers to come home, not to split up the family.’

Since the movement was meant to “persuade the brothers to come home”, some of the standardized emoji are foods and tourist sites, with Emperor Ba's stamp on the right hand top: 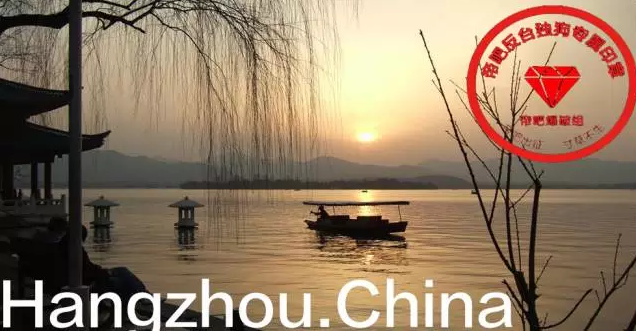 The touristic photos are meant to deliver the idea of “Welcome to China”.

Instructions for the battle: 1. Don't curse; 2. Don't use ‘Republic of China’ in emoji, Use ‘defeat the Taiwan independence advocates”‘; 3. Avoid using “Uncle Xi” [referring to Chinese President Xi Jinping] in the emoji, they may photoshop the image; 4. Don't post your comment too quickly, the account will be suspended; 5. If your account is suspended, you can buy another account at Txxbxx; 6. When you open your virtual private network (VPN), don't use your principal email, it is not secure; 6. Emperor Ba expedition, all grass will be burned, the holy war won't end until all the brain-damaged are dead.

Major messages to be delivered outside the Great Firewall were translated into different languages. Below is one of the translated posts (via Pingwest):

It's ok to wave Taiwanese flag. It's ok that she said she isn't a Chinese but a Taiwanese. It's even ok that they think Taiwan is an independent county. (But don't say that in China's land, for on the cover of their passport are the words ‘Republic of China’. If Taiwan were an independent country, please show us its national flag in the UN. In both the mainland and Taiwan, we are receiving different educations. Therefore, differences existing between people in Taiwan and the mainland can be understood and accepted well. But anyone who wants to make money in the mainland of China must respect the nation. She can choose to stay in Taiwan, doing whatever and saying whatever she likes, which has nothing to do with us. What's more, as far as we are concerned, she's just a teenager and it's shameless of her company to have forced her to make an apology. Neither the Chinese government nor the Chinese media forced her to do that or forced her out.

As the organizers of this effort adopted a “soft” and “communicative” approach, mainland netizens who did not participate referred to them as “little pink” as opposed to fully “red” nationalists. Here is one example of the type of commentary which the incident fostered:

I have one comment on this little pink incident: the eunuchs are stepping out of the Imperial Palace. They suddenly step out from the pig's farm to persuade others to get castrated. Then they return and continue their Imperial dream.

Taiwanese see the humorous side

As the news about the movement had travelled to Taiwan one day before it was launched, the Taiwanese were well prepared to make fun of the mainland Chinese trolls.

The page administrator also posted photos of people waving the Republic of China's national flags, as well as news that would agitate their visitors, such as the petition to urge the UK government to recognize Taiwan as a country.

Some Taiwanese typed in simplified Chinese characters and suggested that pro-unification Taiwanese politician, Tsai Cheng-Yuan, was Tsai Ing-Wen's brother, in order to mislead mainland Chinese trolls into hurling profanities at his Facebook page.

Some posted hyperlinks to pornography sites and banned news, claiming that they linked to Taiwan independence advocates’ Facebook accounts.

Both mainland Chinese and Taiwanese claimed victory in this Facebook war of emoji. Win or lose, at least both sides enjoyed the fight and had fun.

Learning how to ‘climb over the wall’

Perhaps the biggest ripple effect of the entire campaign was that more mainland Chinese netizens learned how to use virtual private networks, or VPNs, to climb over the Great Firewall — and apart from just visiting Facebook, they went beyond, following dissenting voices on Twitter. @wentommy gained 490 new followers in just one day:

The propaganda department is also aware of these repercussions — a notice concerning the action was passed along to major media outlets and circulated on social media:

‘Emperor Ba Holy War’. The incident has become complicated. Local media has to cool down, don't recommend this as a hot topic. Be aware of and delete negative comments making use of the incident to attack the country's system, cross-strait relations. Furthermore, stop harmful information about ‘climbing over the wall’ from being distributed.