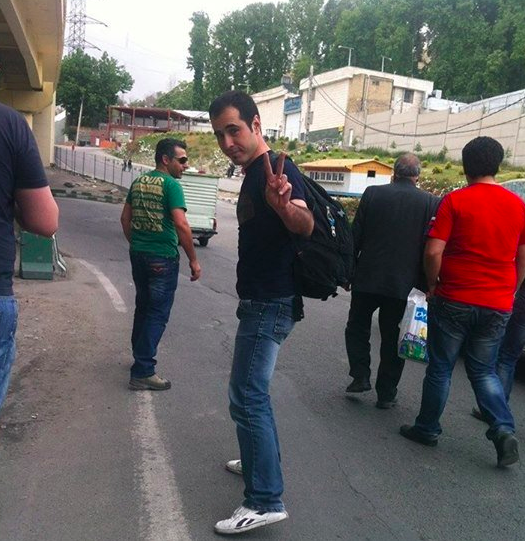 Activist blogger Hossein Ronaghi-Maleki tweeted a photo of himself stating he is determined to stand for his innocence before returning to jail from furlough.

With the lifting of nuclear sanctions and the release of Iranian-American prisoners such as Washington Post reporter Jason Rezaian, the events in Iran on January 18 opened new channels of hope for progress among many Iranians.

But when it comes to dissent in Iran, such progress is hard to imagine. While the world watched Iran re-establish ties with the west, Iranian blogger-activist Hossein Ronaghi was spending his last hours with his family before returning to prison to serve his 15-year sentence for dissident commentary about the 2009 Presidential elections.

Three days before his return to jail, Maleki posted a photo to his Twitter account of his parents’ anguish about his return.

Maleki was arrested in December 2009, six months after Iran's disputed presidential elections. He was arrested and immediately incarcerated at the notorious Evin prison, serving 376 days in solitary confinement before seeing trial.

Maleki blogged under the nickname Babak Khorramdin, the name of an ancient Persian freedom fighter from Azerbaijan (Maleki is an ethnic Iranian Azeri). His 2010 trial led to a 15-year sentence on charges of “spreading propaganda against the regime”, “membership of the Internet group Iran Proxy” and “insulting the Iranian supreme leader and the president.”

According to the Committee for Human Rights Reporters in Iran, Maleki's expertise was in computer programming and setting up websites aimed at circumventing online censorship and establishing ways to access blocked addresses.

Maleki was then released on June 14, 2015, on 14 billion rials (approximately USD $464,000) bail to receive treatment for persistent lung, kidney, and digestive problems. Human rights advocates and fellow prisoners had advocated since 2012 for Maleki's deteriorating health before he was granted release for medical furlough on June 14, 2015.

Maleki's bail payment included the deeds to multiple properties belonging to his parents and family friends.

Pressured by IRGC Intelligence unit to return me to prison, the Tehran Prosecutor issued an official order to confiscate my bail collateral.

Maleki was summoned back on January 14, 2016. His family considered keeping him from returning, but this would have cost his parents to lose properties whose deeds were used as his bail collateral. Maleki's father Ahmad Ronaghi Maleki told International Committee for Human Rights in Iran:

I had given the deed to my house and workshop to bail out my son. A number of my humanitarian friends had also added their property deeds. It wasn’t important to lose my own properties, but I could not endanger my friends and let their properties be confiscated. So I delivered my son to prison.

In the days leading up to his return, Maleki posted on his Twitter his insistence to stand for his innocence.

My main charge is defending freedom of speech (against censorship) for which I was handed an unjust 10-yr prison term. @proxyiran

On Wed I will go to Prosecutor's office for arrest. Like 100's of pol prisoners I'm innocent & don't deserve prison. pic.twitter.com/tTqxYtjq00

Might be last post but I'm determined to gain my freedom bec I'm innocent. The response to opinions is not prison. pic.twitter.com/esIZjSLh9j