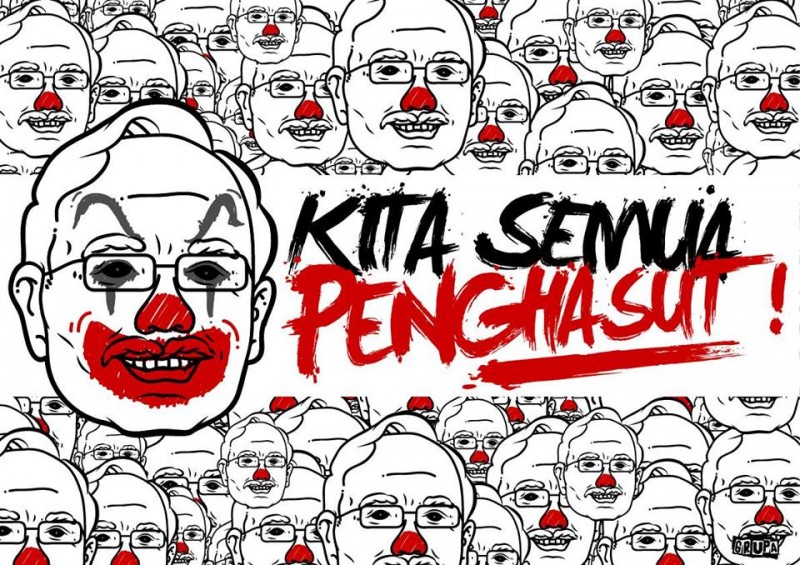 #KitaSemuaPenghasut means “We are all seditious.” Image from the Facebook page of Grupa

Clown memes mocking Malaysian Prime Minister Najib Razak are being shared on the Internet after the police threatened an activist graphic artist for uploading an altered image of the premier.

On January 31, 2016, artist Fahmi Reza posted a tweet denouncing the Sedition Act, accompanied by a clown image of Najib.

In 2015, the Sedition Act was used 91 times. But in a country full of corruption, we are all seditious.

The Sedition Act is a colonial-era law which has been used by successive governments to silence and arrest the opposition and other critical voices in Malaysia. Najib promised to repeal the law in 2012 but instead of doing this after winning a new term as prime minister, he urged parliament to strengthen the measure by citing the need to improve national security.

After Fahmi Reza posted the tweet, he got a quick reply from the Police Cyber Investigation Response Center through Twitter:

You are now under police watch. Use your account responsibly and according to the law.

Friends of Reza from the Grafik Rebel Untuk Protes & Aktivisme (Grupa), or Rebel Graphics for Protests & Activism, immediately accused the police of harassment. They started a campaign urging the public to post clown photos of Najib in support of Reza. The hashtag #kitasemuapenghasut, which means ‘we are all seditious’, was used and instantly became popular in Malaysia.

In a country where cartoonists and satirists have been censored, intimidated, arrested and incarcerated for their art, it is important that this vital form of artistic expression – parody and satire as a form of political protest – is continued to be practiced and to be defended at all costs.

Perhaps to stop netizens from sharing the clown images of Najib, a government agency warned the public that those guilty of humiliating national leaders can face prosecution.

This elicited another reply from the artist:

I designed the warning poster, as a piece of political satire and parody to highlight the absurdity behind the warning issued by the police against spreading the clown pictures; which is a form of internet censorship that goes against internet freedom.

The human rights group Suaram urged the government not to equate satire with crime:

Recalling the nature of office hold [sic] by any government official, public scrutiny and criticism is [sic] part of the democratic process that serves as the foundation of Malaysia. Satirical images and comments made against government official[s] should not be considered as a crime.

Here are some of the clown memes of Najib that were shared by the graphic artist collective, Grupa:

Sometimes laughter is most subversive weapon of all. #KitaSemuaPenghasut pic.twitter.com/4UGdZDmPtm

One tweet referred to a corruption scandal involving Najib, who is accused of receiving 600 million US dollars from a state-run investment firm. Najib claimed the money in his personal bank account is a political donation from a royal family in Saudi.

Another reminded people of Najib's 2012 election pledge to repeal the Sedition Law: