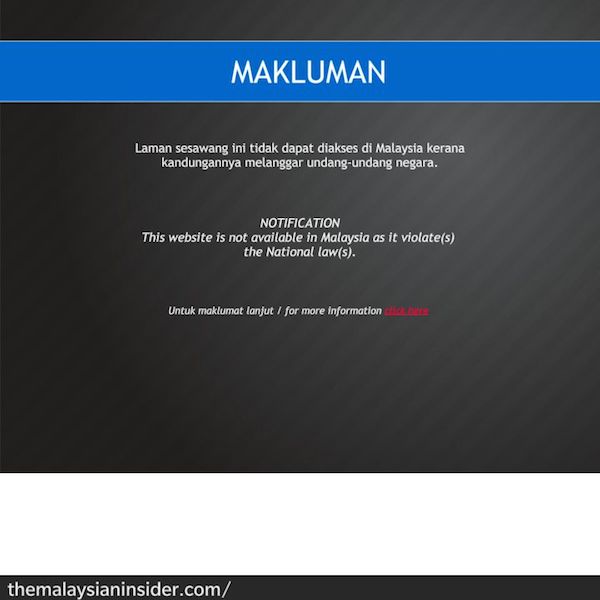 Screenshot of the blocked website of The Malaysian Insider

The Malaysian Insider (TMI) news website celebrated its eight-year anniversary on February 25, 2016 by creating mirror sites and updating its social media pages because it was blocked by the Malaysian government.

The order was issued by the Malaysian Communications and Multimedia Commission (MCMC), which accused TMI of violating Section 233 of the Communications and Multimedia Act 1998. The section deals with “Improper Use of Network Facilities or Network Service”, as well as media content that is “obscene, indecent, false, menacing or offensive in character with intent to annoy, abuse, threaten or harass another person.”

The block could be related to corruption exposure

At first, the MCMC didn’t provide details of the violations allegedly made by TMI, but it later confirmed that they are related to the posting of an article about a corruption scandal involving Malaysian Prime Minister Najib Razak.

Last year, Najib was implicated in a controversy surrounding the discovery of more than $600 million dollars in his personal bank accounts, which he claimed was a political donation from a royal family in Saudi Arabia. The Attorney General has already cleared Najib of any wrongdoing, but some sectors and opposition parties are still pushing for the prime minister's resignation.

Against this backdrop, the blocking of TMI could be related to a story the website published, alleging that a corruption commission is agitating for Najib's prosecution. In fact, the MCMC recently issued the following statement:

MCMC reminds news portals not to spread or publish articles whose veracity has yet to be confirmed.

This could invite confusion and cause unwanted situations.

The editors of TMI have been questioned by the police regarding this issue.

Coincidentally, a day after TMI was blocked, Najib wrote on his blog about using the Internet for the greater good:

Keyboard warriors, cyber troopers and even news portals have made the online world their ‘playground’, constructing their own version of ‘reality’ with click bait headlines that serve their own agendas. This is an unhealthy practice of journalism.

But Aliran, a human rights group, was convinced that the blocking of TMI was connected to a government plan aimed at stopping the publishing of reports about the anomalous financial transactions of the ruling party:

In a social context where major financial scandals have grabbed the attention of curious and concerned Malaysians, the mantra of ‘national security’ or public confusion certainly rings hollow. If anything, the suspicion among the public that the Najib administration has a lot to hide is being reinforced.

The blocking of TMI was widely condemned by media groups, human rights activists, and opposition politicians in Malaysia. The petition to amend the Communications and Multimedia Act of 1998 was also revived, in an effort to clip the draconian powers of the MCMC.

Earlier this year, several websites and blogs, such as Medium and Asia Sentinel, were also blocked by the government for posting stories related to the corruption scandal involving the prime minister.

Empower calls on the Multimedia Communications and Multimedia Commission to cease arbitrarily blocking Internet content, including news portals, and introduce participatory, transparent processes into which the media, civil society, and the public could have input. Blocking online content should be an action of last resort, not the first. The blocking of The Malaysian Insider, the Sarawak Report, the Medium, and other online content must be lifted immediately.

The Centre for Independent Journalism (CIJ) described the blocking of TMI as arbitrary and lacking in transparency:

We are troubled the government has not issued any explanation on its recent actions. There seems to be no transparency in the government’s processes, providing no specific information on laws contravened or even the possibility of appeal.

The Institute of Journalists Malaysia (IOJ) voiced its concern that the government is trying to intimidate the media — especially those that are exposing the scandals of high-ranking officials:

This again appears to be a knee-jerk reaction to news articles that may or may not be critical of the ruling administration.

Such unilateral action could also be construed as an attempt to intimidate the media against running critical news reports.

Geramm, a network of journalists, reminded the government that there are adequate measures to make TMI accountable, if it violated the law, without blocking its website:

Clamping news publications is directly opposite of a healthy democracy.

If a report is lodged, there are enough existing provisions in the law without resorting to blocking access to the website.

Furthermore, it just created more dissatisfaction and contempt among the public.

The Centre for A Better Tomorrow also urged the government to lodge a complaint in the courts instead of shutting down TMI:

If the authorities feel that The Malaysian Insider had broken the law, it should then charge the portal under existing legislation. But MCMC had so far only offered vague reasons couched in general blanket terms for restricting access to the website from Malaysia.

It is still shocking to me as to how far they are willing to go to silence opposing and contrary voices.

Do they not know that no amount of censorship can make a hugely unpopular government, popular again?

In fact, its not even that effective because you can actually use a Google DNS and still gain access.

Finally, parliamentarian Lim Kit Siang appealed to the prime minister to uphold the government's vow to keep the Internet free from censorship:

I call on the Prime Minister to uphold and abide by the 20-year Bill of Guarantee to the world of ‘No Internet Censorship’, immediately revoke the ban and ensure that good sense prevails.