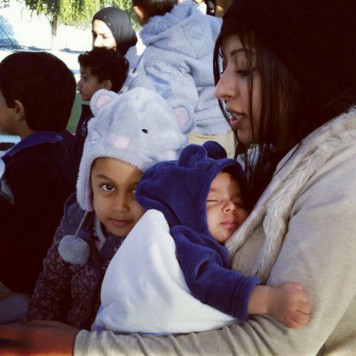 Bahrain today arrested activist Zainab Al Khawaja, along with her 15-month-old son, Abdul-Hadi. The arrest comes on the fifth anniversary of the arrival of troops from Saudi Arabia and the United Arab Emirates to crush pro-democracy protests that have gripped the nation since February 14, 2011.

Known as Angry Arabia on Twitter, for her fiery and emotional reactions to what was happening around her during the harsh security crackdown on dissidents, the 33-year-old's last tweets date from last year. It is not known what triggered her arrest today, particularly since she has sentences totaling three years and a month in prison pending last year —  sentences which are being commuted only today.

According to the Gulf Human Rights Centre (GHRC):

On 02 June 2015, WHRD Zainab Al-Khawaja was sentenced to nine months in prison after trying to visit her father human rights defender and co-founder of the Gulf Centre for Human Rights (GCHR) Abdulhadi Al-Khawaja in Jaw prison in August 2014 when he was on hunger-strike. That sentence was upheld on 2 February 2016 in absentia.

On 03 December 2015, Al-Khawaja also lost her right to appeal in three other cases that were heard in court. Two charges of two-month sentences were first handed down on 09 December 2014 for “destroying public property” when she ripped a picture of the King at Budaiyah police station, as well as a charge of allegedly “insulting a public official” (a police officer), for which she was sentenced to one year in prison. On her birthday which is, 21 October 2015, the court reduced a three-year sentence to one year for ripping up a picture of Bahrain’s monarch during a court hearing in October 2014.

She is sentenced to a total of three years and one month in prison, on a variety of charges including two sentences for ripping a picture of Bahrain’s monarch and one year in prison for allegedly “insulting” a police officer. Furthermore, her one-year-old son is being denied a birth certificate and documentation and her own passport has not been renewed.

The centre further adds that Zainab may have been arrested to pressure her sister Maryam Al Khawaja, a human rights activist also, from pursuing her work:

The GCHR believes that the timing for this house raid and arrest are likely to be in response to the work of Zainab Al-Khawaja’s sister and GCHR Co-Director Maryam Al-Khawaja. Maryam just attended the Human Rights Council 31st session, and was also currently in Zurich for the FIFA elections during which (member of the Bahrain ruling family) Shaikh Salman Alkhalifa lost his presidential bid.

Maryam is also the co-director of the GHRC.

Maryam, who has 102K followers on Twitter, tweeted her sister's arrest as soon as it happened, generating reactions from far and wide condemning the arrest:

Maryam also describes how 15 police jeeps blocked off the road to arrest the young woman and her toddler:

#PT there were riot police, police in civilian clothing and female police. They shut down the entire street in front of the apt #Bahrain

#PT there were 15 police jeeps there to arrest her #Bahrain

And she further explains:

All of Zainab Alkhawaja’s charges are related to freedom of expression and association. #UK training going great #Bahrain

While the arrest of Zainab is expected in a country that now has imprisoned (and released) thousands of people on politically motivated charges, the online world was appalled at the arrest of her one-year-old son.

Is it not enough that they Jail the Elderly, the Sick, The Youth, Women & Children … Now it's 1yr Olds Aswell. #Bahrain