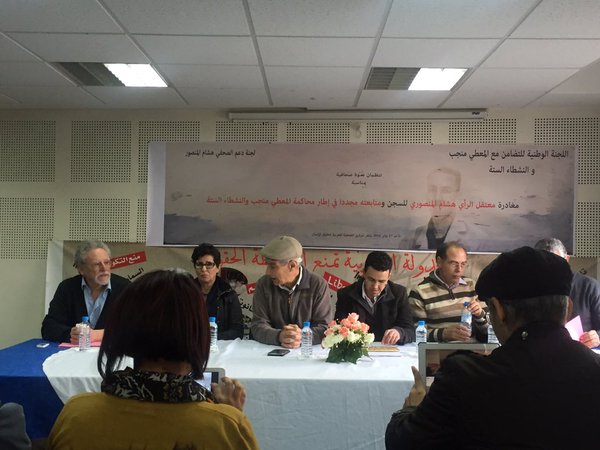 Hicham Mansouri and Maâti Monjib at press conference about their trial in Rabat. January 2016. Photo by Samia Errazouki.

The trial of seven Moroccan journalists and human rights defenders that was scheduled to begin this week has been postponed to 29 June 2016. The decision was made during a hearing on 23 March 2016 at the Tribunal of First Instance of Rabat.

Among those charged is Hicham Khribchi aka Hisham Almiraat, a medical doctor and long-time member of the Global Voices community. Hisham has been a leading voice in Morocco’s blogosphere for nearly a decade. He co-founded citizen media projects Talk Morocco and Mamfakinch, and served as Global Voices’ advocacy director.

The seven advocates defend human rights, hold authorities accountable to the public, and uphold rule of law in their country. Five have been charged with “threatening the internal security of the State” and two face charges of “receiving foreign funding without notifying the General Secretariat of the government.”

The trial was postponed despite the defense committee's pleas to the judge for the need to begin the process without delay. The defense committee is composed of ten lawyers and chaired by barrister Abderrahmane Benameur. The presiding judge justified this week's postponement to the fact that two of the seven accused, Hicham Mansouri and Hicham Khribchi, were absent.

Present during the short hearing were five foreign observers: Richard Winfield from Columbia School of Law, co-founder of the International Senior Lawyers Project (ISLP, New York); Kristina Mendoza, member of the ISLP; Yasmine Kacha, head of Reporters Without Borders’ Maghreb office (Tunis); Peter Ganz, Vice President of Observatoire de la déontologie de l’information, a media watchdog, and representative of the international support committee for the accused (Paris); and Veronica Janssen, political adviser to the European Union delegation in Rabat. At the request of the judge, the defense committee handed a list of foreign observers’ names to the court.

Shortly before the hearing, the support committee organized a press conference at the headquarters of the Moroccan Association of Human Rights (AMDH) in Rabat. Two of the seven co-defendants, Mr. Monjib and Mr. Tarik Rachid spoke at the conference, along with Mr. Ganz, Ms. Kacha and Mr. Abderrahim Jamai.

Also present at the conference were representatives in Rabat of international news agencies (Agence France Press, Reuters, Associated Press and the EFE news agency) in addition to the Al-Jazeera network. The local press was conspicuously absent from the conference.

AMDH President Ahmed Al Haye read a statement to be addressed to Mr. David Kaye, the UN Special Rapporteur on the Promotion and Protection of the Right to Freedom of Opinion and Expression.

In response to a question from the press about rumors that some defendants may have sought political asylum abroad, Maati Monjib said he could “understand why young people are losing confidence in the justice [system] of their
own country.”

During the hearing, the support committee organised a small demonstration in front of the court under pouring rain.

[TIMELINE] Morocco: Political Repression in the Era of Social Media