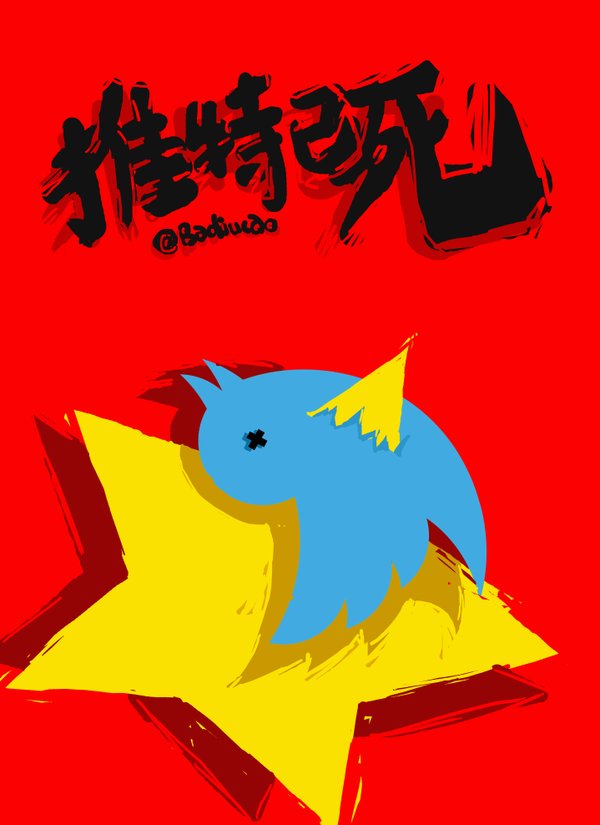 Political cartoonist Badiucao is deeply worried about the background of Twitter's new managing director and proclaimed the death of Twitter with his drawing. Image from Badiucao's Twitter.

Chinese dissidents were not thrilled when Twitter CEO Jack Dorsey announced on April 15 that the company has hired Kathy Chen as the new managing director for greater China. Chen previously worked for organizations affiliated with the People's Liberation Army and Ministry of Public Security in China, both state institutions.

A big welcome to Twitter, @KathyChen2016! She joins us as our MD for China!

Although Twitter has been blocked in China since 2009, the number of advertisers that the platform sees from mainland Chinese companies has grown 340% since last year. Major mainland Chinese advertisers include brands such as Lenovo Group and Huawei Technologies, as well as domestic media outlets like the state-owned Xinhua news agency and People’s Daily.

Chen will be in charge of developing business strategy in the greater China region, according to Shailesh Rao, Twitter vice president for Asia-Pacific, Latin America and Emerging Markets.

However, some mainland Chinese Twitter users are doubting her intentions, given Chen's previous positions. According to a BBC Chinese report, between 1999 to 2005, Chen worked for a corporation whose joint investors were the US-based Computer Associates International and China's Ministry of Public Security.

Hong Kong-based news outlet Apple Daily also revealed that she worked for seven years at a research center under the Second Artillery Force of the People's Liberation Army, the armed forces of China. Stints at Microsoft and Cisco Systems round off her resume.

It wasn't only her professional background that had Chinese netizens worried. Many found her a follow-up tweet, in response to Chinese state television network CCTV, chilling:

@cctvnews @jack let's work together to tell great China story to the world!

.@kathychen2016 @cctvnews @jack how about first getting the CCP to unblock Twitter unconditionally? That would be a GREAT China story!

However, for mainland Chinese dissidents on Twitter, it is not a time for humor. @Badiucao, a political cartoonist, proclaimed Twitter dead with his new drawing (see top of this post):

#TwitterIsDead: Twitter announced yesterday that the new China manager is @kathychen2016. BBC reported that she previously worked for a corporation in which China's Ministry of Public Security was an investor as the person responsible for information security services. If that's true, #Twitter, a bistro where Chinese people can be free and safe, comes to an end.

@Arctosia pointed out that Chen must have gone through the Chinese Communist Party's political review process in order to serve in the People's Liberation Army:

This decision not only affects mainland Chinese, but Hong Kong and Taiwan Twitter users, that the person behind the Greater China's section of the platform is a Chinese Communist Party member, a military veteran who participated in the research of a missile and touched People's Liberation Army secrets — which means, she had to pass the party's background check and political review.

A open call has been posted on the US White House's petition platform asking for the US government to further investigate Chen's background:

Twitter is almost the only one effective platform for Chinese Dissidents and netizens sharing information forbidden by China government, and protecting themselves by updating their realtime state about whether they are safe or being arrested by China Government.

However, a female named ‘陈葵’ [Chen Kui] who used to be the CEO of a company that is highly related to the Ministry of State Security of China, has recently been appointed to be the regional CEO of Twitter in Greater China. This is a severe threat to the Chinese struggling for free speech. And it is also a penetration to the science and technology society of US.

While the language in the petition may seem hyperbolic, the Chinese government has been very active in uprooting domestic and overseas activist networks in recent years. Many dissidents who have been critical of the government have been charged with picking quarrels, inciting sedition or even sedition outright. Given the growth of China's extraterritoriality in incidents such as the alleged kidnapping of booksellers in Thailand and Hong Kong and the deportation of Taiwanese criminal suspects from Kenya to China, it is no surprise that Chinese dissidents using Twitter are concerned that their privacy could be exposed to mainland Chinese authorities.

@baiducao @jack Chinese cyber legislation cracks down on dissidents. For example, if they catch Badiucao, for those who don't understand the situation, the authorities would cover up the arrest with charges of prostitution, criminal assault, etc. However, when they interrogate Badiucao, they would dig up every post that he has written and calculate the prison time accordingly. A 10-year imprisonment and that's the end of Badiucao. In CCTV's confession, they would never say the prosecution is about the tweet he has written.