Thailand’s military-backed government has authorized the National Broadcasting and Telecommunications Commission (NBTC) to shut down TV and radio stations which are found guilty of broadcasting programs that threaten national security. Furthermore, the junta gave NBTC officials immunity from legal accountability.

Human rights groups believe this ruling aims to prevent activists and other political forces from campaigning against the approval of a draft constitution in a national referendum scheduled for August 7.

Several media networks have signed a joint statement expressing concern about the ruling:

The army grabbed power in 2014, but its leaders promised to restore civilian rule once electoral and political reforms were implemented. Two years later, the army is still in control of the government. Protests are banned, media is strictly regulated, and dissenting politicians or journalists are given ‘attitude adjustment’ sessions in army camps.

The junta drafted a constitution as part of the normalization process, but critics have pointed out that it contains provisions that will reinforce military control in the bureaucracy.

Activists and academics cannot launch a vigorous information campaign about the constitution because the government has outlawed any discussion that would persuade the people to vote in favor or against it. The junta insists Article 61 of the 2016 Referendum Act only seeks to stop the spread of malicious and wrong information about the constitution, but activists assert that it legitimizes the crackdown on free speech.

In the past several weeks, activists have been arrested for distributing flyers that encourage the public to reject the draft constitution. 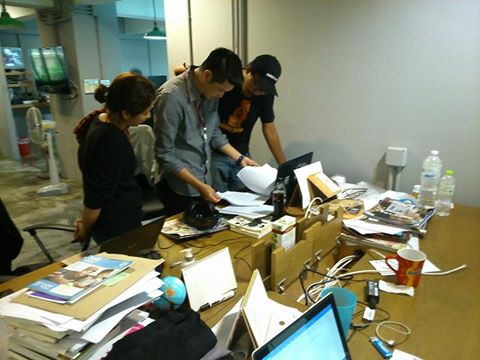 A plainclothes police man searches the desk of a journalist at the Prachatai office. Photo from Prachatai

Last week, journalist Taweesak Kerdpoka and several activists were detained after police found information materials about the constitution in their car.

They have since been released. But police then raided the office of Kerdpoka, who works for independent news website Prachatai, a Global Voices partner. Prachatai reported on its website that the police seemed to be searching for evidence to link the news organization to activist groups campaigning against the constitution.

Taweesak is the first journalist to be arrested under a new law that makes it illegal to criticize the ref. #Thailand #PressFreedom @AP

The Southeast Asian Press Alliance emphasized the importance of the media in providing a balanced information about the proposed constitution:

Amid a tightly controlled media and political environment, the media plays a very important role in keeping the public informed about all aspects of the document that will serve as the framework of their country’s governance. Unhampered media reportage of different views and activities is essential for Thai citizens to attain a balanced view about the draft charter’s merits and flaws, in order to vote according to their conscience.

The Committee to Protect Journalists is urging the Thai government to stop intimidating the media sector:

If Thailand's military junta wants its referendum to be seen as credible, it must stop harassing journalists covering the campaign and let information flow freely to the public.

iLaw, a group promoting civil liberties, insists that the Article 61 ban on information that “influences” voters one way or another undermines the credibility of the referendum:

We have observed that public discussions on the Draft Constitution and on the Referendum are unusually muted, even though day of the Referendum is rapidly approaching. People are afraid to speak out, or to take part in debates, or to carry out campaign activities. This atmosphere is not conducive to a free and fair referendum, and therefore the results are unlikely to be fully accepted, either in Thailand or abroad.