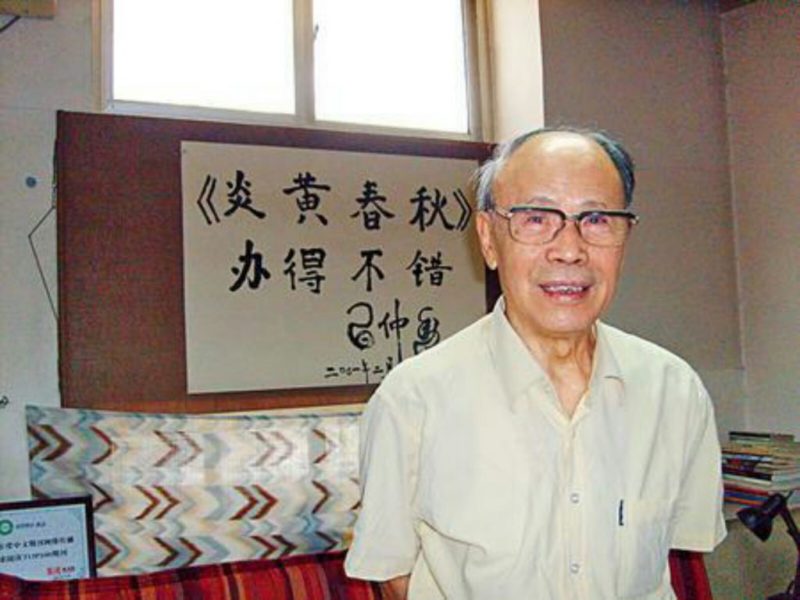 Du Daozheng standing in front of a calligraphy written by Chinese President Xi Jinping's father Xi Zhongxun. The calligraphy is a gift which praises Yanhuang Chunqiu's publishing work in 2001. Photo via Bowen Press.

“Better to be a broken jade than an intact tile.” With that Chinese idiom, which means death is preferable to dishonor, the publisher of Yanhuang Chunqiu announced on July 17 that the reformist magazine would cease publication.

Founded in 1991, Yanhuang Chunqiu was partly state-affiliated, but nevertheless initiated discussions in China about political reform, including “intra-party democracy,” congressional reform and relaxing the government's control over the media.

Authorities’ tolerance for the magazine, however, has waned in recent years amid President Xi Jinping's tightening grip on power and aggressive ideological campaign. On June 12, the China Academy of Art, which comes under the Ministry of Culture, removed all of the magazine's directors and assigned six new people to take over its management. The magazine's editorial committee attempted to file legal charges against the Academy for violating previous agreements, but the effort failed.

Things then escalated dramatically in the days that followed. On July 15, authorities broke into the magazine's offices, seized all the property including bank accounts and changed the password for the magazine's website.

Founder and publisher Du Daozheng condemned the takeover of Yanhuang Chunqiu in the statement announcing the end of operations:

[The China Art Academy]'s announcement of the magazine's new leadership has violated citizens’ freedom of the press, which is protected by Article 35 of the Constitution, and has broken the previous contract, which ensured the editorial committee's autonomy in managing, publishing and financing the magazine.

After Yanhuang Chunqiu's editorial team discussed the matter, everyone agreed that from today onward (July 17), the magazine would cease to operate. Any other person publishing under the name of Yanhuang Chunqiu has no relation to this editorial committee.

All three directors removed by the Academy have strong links to the Chinese Communist Party, suggesting that the decision to intervene came from the party's top leadership.

Attempt after attempt to intervene

Since 2013, the party has made several attempts to intervene in the magazine's editorial autonomy. In January 2013, the magazine's website was taken offline for more than two weeks. The block came after a high-profile incident of censorship at the Guangzhou newspaper Southern Weekly in which authorities replaced discussion of constitutionalism in favor of praise for the Chinese Communist Party. Observers believed that the move against Yanhuang Chunqiu was meant to prevent the magazine from spreading their proposals for political reform in support of their liberal friends.

In September 2014, the magazine's supervision was re-assigned from the Chinese Yinhuang Culture Research Institution to the China Academy of Art under the Ministry of Culture, a change which the editorial committee resisted. They appealed to the magazine's advisory committee, which is composed of senior party members, for support. Eventually, the magazine was allowed to retain partial editorial autonomy, but had to accept the stationing of content supervision staff appointed by the Academy.

In February 2015, the Academy banned the magazine from publishing its spring festival editorial and forbade the editorial committee from organizing its annual spring festival gathering. In June of that year, the extreme leftist wing within the Chinese Communist Party launched an attack on the magazine's “anti-party” mistake in narrating the history of the party, and its chief editor was forced to leave. In May 2016, censorship authorities stopped the printing of the magazine's feature on the 50th anniversary of the Cultural Revolution — the violent purge of people deemed anti-communist during the 1960s and 70s — at the presses.

Moreover, a number of the magazine's editors and advisers have been harassed for their characterization of Chinese history. Hong Zhenkuai, former chief editor of the magazine, was sued in July 2015 for “defaming” the Five Heroes of Langya Mountain — a group of soldiers glorified for refusing to surrender to invading Japanese warriors during the Sino-Japanese War in 1941. They are said to have killed themselves instead by jumping off a cliff. Hong had pointed to historical records that indicated two of the heroes actually died from accidents.

And 93-year-old Chinese Communist Party historian He Fang was put under a party-led disciplinary investigation for criticizing former Chinese leader Mao Zedong in May 2016.

‘Xi's government wants to educate its officials into “fools”‘

Following the announcement of Yanhuang Chunqui's shutdown, one of the magazine's former managing editors quoted current Chinese President Xi Jinping's own words, as spoken to party magazine Quishi, to explain what has happened to China's media sector:

[Xi said] ideology and the public sphere are divided into three color zones: red, black and grey. Red is our territory and we have to defend it; black represents the negative side and we have to use our swords to minimize its influence; as for grey area, we have to take it over and turn it into the red zone.

Yanhuang Chunqui must then fall into the grey area, according to the ideological battle that Xi is waging.

Yanhuang Chunqiu should not be considered outspoken. It is just an official channel for party leaders and officials to understand the history of the Chinese Communist Party. The crackdown on Yanhuang Chunqiu and today's takeover indicates that Xi's government wants to educate its officials into “fools” like the rest of the society. Party members and officials should remain naive.

Political cartoonist @thomasycwong gave the situation a humorous spin, imagining how Xi Jinping successfully can make a desk bow to him:

Hey, Yanhuang Chunqui, a bunch of bookworms who know nothing [about politics]! I can make a desk bow to me!