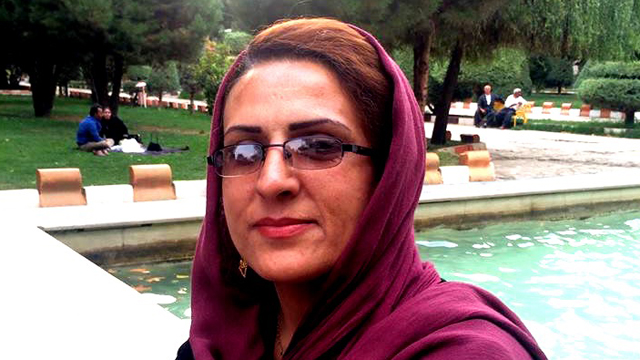 The wife of a prominent labor activist has been charged with posting “insulting” content on Facebook. She says she does not use Facebook, which is banned in Iran. Image from ICHRI and used with permission.

A version of this article was originally published in two parts on the website of the International Campaign for Human Rights in Iran. You can find them here and here.

The wife of prominent labor activist Mahmoud Salehi was charged with posting “insulting” content on Facebook in early June. Yet she insists she does not the social media site, which is banned in Iran.

In an interview with the International Campaign for Human Rights in Iran, Najibeh Salehzadeh explained:

They told me that during a trip to France I had posted material on Facebook against the Islamic Republic and the supreme leader but I don’t have Facebook and I traveled to France to accompany my husband, who had been invited by a large labor organization in Europe.

Salehzadeh told the Campaign she was summoned to Branch 2 of the Prosecutor’s Office in Saqqez, a city in Iran’s Kurdistan Province, on June 6, 2016 and charged with “propaganda against the state” and “insulting the supreme leader.” Her trial is now awaiting verdict after appearing at Branch 1 of the Revolutionary Court in the city of Saqqez in Iran’s Kurdistan Province.

According to the indictment, a woman named “Sanaz” had posted two items on Facebook with Salehzadeh’s mobile phone number printed on the bottom of at least one of the postings, yet prosecutors have never shown Salehzadeh the “evidence.” The alleged postings were identified by Iran’s Cyber Crimes Police Force (FATA), which then opened the case against Salehzadeh.

“I said in court that it does not make sense for me to use a false name on Facebook and then give out my real phone number to the public,” she said.

Salehzadeh told the Campaign that many people came to know her cell phone number in 2007 when her husband was first detained and she gave interviews regarding his situation.

Salehzadeh’s husband, Mahmoud Salehi, is a prominent labor activist who has been arrested and imprisoned on a number of occasions in Iran for engaging in peaceful protest activities. On September 28, 2015 he was sentenced to nine years in prison for “participation in opposition assemblies and propaganda against the state.” He is currently free on bail and seeking medical treatment for kidney disease.

The honorable case judge has said that my wife and I had spread propaganda against the Islamic Republic [while we were ] in France. For your information, the video recording of my speech to the representatives of 50 labor unions in France is available, and the honorable judge… can see clearly that the conference had nothing to do with the Islamic Republic or anyone’s sacred beliefs.

Independent unions are not allowed to function in Iran, workers are routinely fired and risk arrest for striking, and labor leaders are prosecuted under national security charges and sentenced to long prison terms.