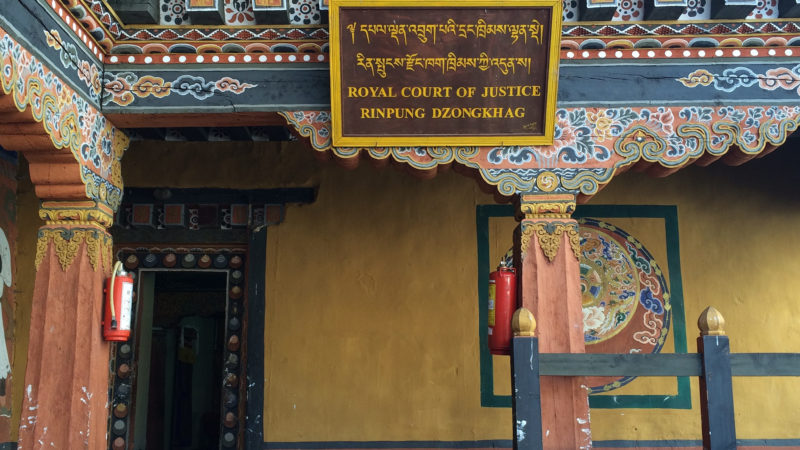 Dzongs are both administrative and monastic centers. So, they have courts in them. Image from Flickr by Hriday. Paro, Bhutan 2015. CC BY-NC 2.0

Bhutanese journalist Namgay Zam is facing defamation charges over a Facebook post, marking the first time that anyone in the Himalayan country has been taken to court over their social media activities. Official statements surrounding the case indicate that social media users in Bhutan may soon be restricted in what they can say online.

The suit against Zam revolves around a family that is fighting a property dispute against well-connected business man Ap Sonam Phuntsho, who is also father-in-law to the Chief Justice of Bhutan.

In an online appeal posted by Namgay on Facebook, Dr. Sacha Wangmo explains how Phuntsho attempted to seize her family's home when an estranged family member could not repay Phuntsho a debt of Nu 0.7 million. Wangmo says that Phuntsho forged documents to show that they sold their house to repay debts to him, something to which the family says they never agreed. The documents also indicated that their debts had compounded, rising from Nu 0.7 million to Nu 3 million.

The dispute led to a series of court battles, during which Wangmo’s sister disappeared.

Dr. Sacha approached media houses and they had not been keen on doing her story. She wrote the appeal for Namgay for sharing, where she also accused Phuntsho of using his power and influence to tilt the verdict in his favor. The Facebook post garnered plenty of attention online, and caused an uproar among Bhutanese Facebook users. And it did not help the case, which was being reviewed by Bhutan's Supreme Court after Dr Sacha's mother had appealed to the King.

This triggered Phuntsho's response. He quickly filed a defamation case against Wangmo and Zam, who is a former television journalist and Humphrey fellow at Arizona State University in the US. Arguing that the post had caused “irreparable damage” to his reputation, as many people in Bhutan and across the world had seen it. The businessman claimed Nu 2.59 million (USD $38,500) as compensation, before a packed court:

Should the two of them fail to prove the allegations that went viral in Namgay Zam’s Facebook post, I’m claiming 10 percent of the amount the case was worth.

Sonam Phuntsho, in his lawsuit, pleaded to the court that Namgay Zam and Shacha Wangmo should prove the 25 accusations made against him on social media.

Namgay Zam told the court that she had not violated any laws and the constitution gives her the freedom to disseminate information.

Social media users in Bhutan have been following the case closely and voicing their opinions on the issue. On Facebook, the story has caused new allegations of fraud and other violations of the law against Puntsho to emerge.

Respected PM, you are right. Others right should be protected. We should not defame others. But maybe you should know that many people share over social media their grievances when justice is not served. For example, there are lots of posts against Ap SP and how he tortured his victims. Does that ever give a click in your mind that Ap SP and his relatives could be misusing their power? It is possible but won't you doubt a bit when Ap SP wins all the cases filed against him? When many citizens are affected, doesn't that call for some kind of independent investigation? Can we apply here some common sense besides just law?

Wangchuk Dorji mentions that Namgay was wrongfully charged for defamation:

Her words are the introductory remarks on Dr. Sacha. Ms. Namgay clearly writes “This is Shacha Story today as written by herself.” And the rest were Dr. Sacha's word and story.
I don't read any defamatory remarks about Mr. SP from Ms. Namgay herself in her post. Now let's discuss about her “intention”. I can only sense an “intention” to share someone's story, & not to defame someone.

Many users commented on the use of defamation laws as a silencing tool. Dargo Tashi writes:

Defamation suits are one of the most common tactics that the powerful people use to protect their filthy truths from the public domains, the truths which are already quite hard to dig anyways.

Dr. Sacha lost the case against Ap SP. But did Ap SP get punished for forgery? Didn't he forge documents and present it in District Court? Isn't that a serious crime in the court of law? Is this how the Supreme Court of Bhutan passes verdict?

An analysis by the English language Asia-Pacific news site The Diplomat stated that at the heart of the debate is how the elite in Bhutan and their close relatives are treated differently than common citizens.

The Prime Minister Tshering Tobgay has weighed on the issue saying that the defamation case “will be a landmark case we should be paying attention to.” He mentioned:

I think we can all agree that the laws of the land must prevail, that the Constitution gives us the right to freedom of expression but that right does not mean we undermine the right of others. So our job collectively is to enjoy our rights by protecting the rights of others and to make social media a safe, credible place where vibrant discussion takes place, and not the divisive debate that sometimes take place on social media and definitely not while using an anonymous account.

The Information and Communications Minister, DN Dhungyel indicated that legislators may soon introduce a policy that would restrict what can be shared in social media. In the meantime, supporters have posted a renewed petition advocating for Sacha's case.

As for Zam, hers remains the only case in Bhutan in which a journalist has been sued for a large sum over a social media posting. The ruling therefore is very important and will determine the future for journalists who are already very cautious – given the small and insular nature of Bhutanese society — and for citizens using social media.