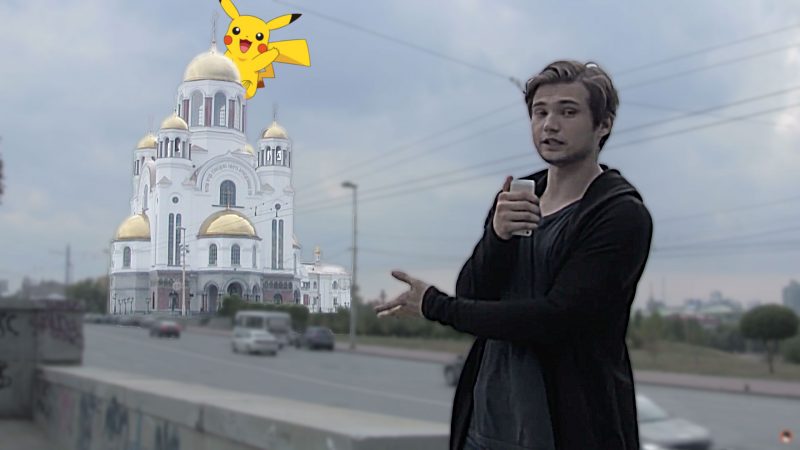 Ruslan Sokolovsky outside the Church of All Saints in Yekaterinburg. Image: YouTube. Edited by Kevin Rothrock.

If you’re interested in the Russian Internet enough to have made it to RuNet Echo, there’s a good chance you’ve already heard of Ruslan Sokolovsky, the young video-blogger from Yekaterinburg who’s been jailed for at least the next two months, while police investigate him for committing extremism and offending religious people. Sokolovksy’s alleged crime—the stunt that has people comparing him to Pussy Riot—was playing Pokemon Go inside a Russian Orthodox cathedral. If convicted of the charges, he could go to prison for up to five years.

On September 3, the day Sokolovsky was taken into custody, the Sverdlovsk region’s Investigative Committee released a press statement, explaining that “a local 21-year-old man” has been charged with violating two different articles of Russia’s criminal code. The statement doesn’t name Sokolovsky (whose age has been reported as 22 by most media outlets), but it’s clearly about him. The Investigative Committee doesn’t mention Pokemon Go, but its press release does specify that the suspect “uploaded several video files” to YouTube that expert analysis subsequently classified as “incitements of hatred or hostility.” The statement also vaguely describes Sokolovsky’s gaming stunt, saying he “violated the right to religion in a house of worship” (though it’s unclear how he managed this, walking around with his mobile phone out).

Following appeals by Yekaterinburg’s mayor, Evgeny Roizman, and the region’s leading independent news website, Znak.com, local Orthodox church officials say they will ask the court to show leniency and release Sokolovsky on bail. “Metropolit of Yekaterinburg and Verkhoturye” Kirill told Znak.com that he’s issued instructions to see how the church can help get Sokolovsky out of jail, saying he would like to involve the young man in charity work alongside Orthodox clerics. “Maybe this would help him see life differently,” Kirill explained.

Within hours, speaking through a member of a local public monitoring committee, Sokolovsky expressed his willingness to take such a deal, saying he still doesn’t believe that he committed any acts of extremism or offended anyone’s beliefs, but that he’s happy to enter into a dialogue with the Orthodox Church.

Who Is Ruslan Sokolovsky?

The man known today as Ruslan Gennadevich Sokolovsky was apparently born Ruslan Gofiulovich Saibabtalov. This revelation comes courtesy of Sergei Kolyasnikov, another Yekaterinburg-based blogger, who has viciously attacked Sokolovsky/Saibabtalov in a series of posts detailing his background and anti-religious activism.

Kolyasnikov offers the fact that Sokolovsky changed his name as evidence of something unspecified but sinister. Kolyasnikov highlights with suspicion that Sokolovsky’s atheist satirical magazine—self-titled and modeled directly on Charlie Hebdo—seems to enjoy impressive funding. In the magazine’s first edition, for instance, Sokolovsky wrote that advance sales were enough to hire four cartoonists, a printer, a logistics manager, and a publishing agency. Kolyasnikov suggests that there are larger forces at work, sustaining the magazine and Sokolovsky’s activism, more generally. The next bit of leaked information, he believes, supports this theory.

On September 4, Alexey Stolyarov (the infamous prankster “Lexus,” whose politics are generally patriotic and conservative) published a screenshot of an email inbox, claiming that “unknown persons” hacked Sokolovsky’s email before he was arrested. The image shows several identical messages that the blogger apparently sent to different foreign embassies, describing his perilous situation and asking for political asylum.

“He specifically breaks the law, so that later, sitting at home, he can search for somebody to harbor him, so he can piss off from crappy Rasha,” Stolyarov wrote on Facebook, asking his subscribers to share the image.

In an overt effort to discredit him, Kolyasnikov also claims (without any proof) that Sokolovsky was detained after a late night of heavy drinking and taking ecstasy. Kolyasnikov also says he shared the drugs with a girl—a minor—who was found in his bed, when police raided his apartment to seize his blogging equipment. (Sokolovsky allegedly slept with many of his underage fans.) Kolyasnikov also contradicted widely reported information that Sokolovsky lives with his disabled mother, saying she actually lives in the city of Kurgan—almost 300 miles southeast of Yekaterinburg.

Dmitry Kalinin, a member of Russia's Social Monitoring Commission and now apparently one of Sokolovsky’s confidants, has verified some of Kolyasnikov’s allegations, revealing that Ruslan did indeed change his name at the age of 18, and that his mother does in fact live in Shadrinsk in the Kurgan region (“they talk a lot,” he explains).

Kalinin also writes that the “streamer” video-blogger “Diana Elias” has sent money to Sokolovsky’s mother, to help her with living expenses and also with lawyers’ fees for her son. “Diana Elias” (presumably a stage name) is another young video blogger from Russia’s regions. Listed as “engaged” to Sokolovsky on Vkontakte, she claims to be 16 years old on Instagram (though earlier this year she said was born in August 2002, which would make her just 14 today). (To make matters more complicated, she says she’s 15 on the “streamer” website Twitch.) The romance between “Diana” and Ruslan appears to be something entirely virtual: she is based in the Siberian city of Kemerovo (more than 1,000 miles east of Yekaterinburg), and she hasn’t published a single photo of herself with Sokolovsky. (She also describes herself as Russian Orthodox, photographs herself attending church, and writes, “I only like Orthodox guys!”) (That said, she’s also perfectly open to mocking Patriarch Kirill on Vkontakte.)

Whatever the nature of her relationship with the RuNet’s now most-famous atheist, Diana Elias’ efforts to raise money for Sokolovsky’s legal defense are quite real. This past weekend, she raised at least 48,000 rubles ($735) for a lawyer in a video-streaming marathon. The fundraising drive even attracted a Skype call from Evgeny Volnov—another popular video blogger, who shares the same advertising manager as Sokolovsky. (While sympathetic to Sokolovsky's crusade against the Orthodox Church, Volnov, who’s known for pranks and “bro” humor, spent most of his call trying to persuade Elias to undress for better donations.)

That Sokolovsky has an advertising manager, incidentally, should come as no surprise: the blogger gained a reputation for jilting customers who buy ad space on his video blog, taking their money and never airing their content. These incidents led to several angry videos, where abandoned clients monologue into cameras about being ripped off. Fellow video bloggers subsequently filmed their own videos about the scandal, making for the “talk of the town” in Russia’s “streamer” world earlier this spring.

Who Really Cares About Ruslan Sokolovsky?

The “Sokolovsky!” YouTube channel currently has almost 300,000 subscribers, and the video of him playing Pokemon Go inside the Church of All Saints is nearing a million views. “You might say that Sokolovsky is more popular than the vast majority of the media outlets in Yekaterinburg,” writes Dmitry Kolezev, a columnist at Znak.com.

Sokolovsky’s popularity and polish are precisely what inspire so much support and suspicion online. Fans apparently love his gimmicks and graphics, while critics view his actions as too sophisticated for a man just barely out of his teens. It’s a familiar debate, where little is believed to be what it seems, and we see it in Russia nearly every time something emerges that is ostensibly a reflection of what interests ordinary people.