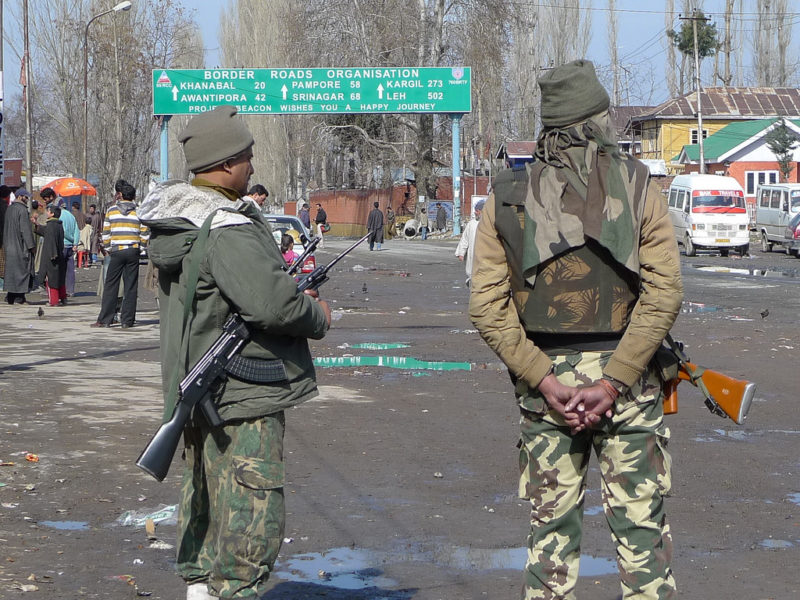 Indian Army on duty in Jammu and Kashmir. Image from Flickr by Kris Liao. CC BY-NC-ND 2.0

This article was written by Hasit Shah and originally published on Slate's Future Tense blog. It is republished on Global Voices as part of a content-sharing agreement.

There has been no mobile internet in Indian-administered Kashmir for nearly two months. What would be a disaster for most Americans has become the mundane reality for millions of Kashmiris.

The Indian government closed off mobile web access in response to violent protests that followed the death of a local militant commander in a gun battle with the Indian military in early July. Dozens of people have been killed. The forced absence of online social networks, alongside the usual curfews, has made it more difficult for people to spread information and organize protests. Newspapers in Kashmir are calling it an “e-curfew.”

From the government’s point of view, this helps prevent what it often calls “anti-national activity.” It is not always clear what that means. Kashmir is not the only place where the Indian government has employed this tactic. Last year I was in Gujarat, Prime Minister Narendra Modi’s prosperous home state, when there were protests over jobs—accompanied once again by violence—and there, mobile internet was shut down for a week.

These regular, deliberate restrictions on internet access contrast sharply with India’s otherwise forward-thinking technology polices. “Digital India” is the government’s most visible, outward-looking public initiative. Modi, a tech-savvy nationalist from the right-wing Bharata Janatiya Party, has traveled the world to sell the idea of India as an emerging digital economy, making deals with the likes of Google and (less successfully) Facebook. At home, he has repeatedly echoed the UN’s view that internet access is a basic human right, alongside other amenities like electricity and sanitation.

The government has an ambitious, complicated plan to connect a country in which only about a fifth of the population had access to the internet before the BJP came to power in 2014. In addition to dramatically increasing the number and quality of internet connections, it aims for improved access to government services and encourages local digital entrepreneurship and innovation. Modi is even featured in advertisements for Reliance Jio, a recently launched range of fast, cheap mobile internet services from India’s biggest conglomerate. 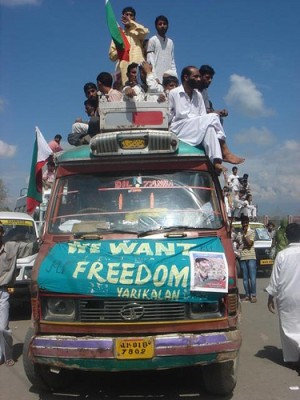 The violence between India’s security forces and generations of mainly young men in Indian-administered Kashmir has been ebbing and flowing for nearly seven decades. It is a beautiful, mountainous, strategically important, and perennially contested region in which many people have never truly felt Indian. Some Kashmiris would prefer to join Pakistan, a country that already controls a large chunk of Kashmir across a disputed, battle-scarred “line of control” (a tiny, eastern corner is claimed by China). Others would choose independence. Neither option is remotely acceptable to the Indian government or to most Indians, and there is always a heavy military presence in the region. The politics are complex, the violence endemic.

In 2008, I produced reports for the BBC from Srinagar, the summer capital of Jammu and Kashmir (the Indian state comprises two regions joined together—Jammu is mostly Hindu, Kashmir is Muslim), during one of its periodic violent surges. The serenity of the stunning Dal Lake, whose houseboats are popular with honeymooners in quiet moments, was broken by large political rallies, increased military activity, stone-throwing youths, and inevitable deaths in the city. Although there was a curfew, there was no need to shut off the internet, as very few people had any kind of access in those days.

Internet-enabled mobile devices are now available for less than $20 in India, and sales are booming. Data is becoming cheaper and connectivity is getting better. There are millions of new internet users every month, almost all on mobile. Everyone communicates using WhatsApp, which is much more than a messaging service; it’s a proper social network that functions well even with low-quality devices. Facebook doesn’t always work. WhatsApp is far more effective than the old text messaging for exchanging information and organizing group activities, “anti-national” or otherwise.

The internet is not completely absent in Kashmir right now, but it might as well be. The state-run telecommunications company BSNL maintains its internet availability and phone connections, but few use the service. Broadband internet has now been restored, but most people still don’t have this kind of connection in their homes—luxury hotels and other commercial locations usually have Wi-Fi, and some people have found ways to tap into these sources, often gathering to use their smartphones and stolen Wi-Fi passwords in alleyways near these buildings.

For most people, there is no internet. Families cannot stay in touch easily. Schools have been closed because of the violence, and students can’t use web resources to try and keep up. There is no digital entrepreneurship or innovation. It is difficult for journalists to report on what is happening. Vital information is missing. Kashmiris in India have been transported back to a pre-digital era. They are anxious and isolated.

The United Nations Human Rights Council condemned the deliberate removal of internet services in June, just a few weeks before the violence erupted. At best, internet shutdowns are a blunt instrument of crowd control. It is not clear that they prevent violence and improve public safety. There is always a way for determined people to communicate and organize—protests in Kashmir and elsewhere existed long before messaging apps.

Modi has made it clear that internet access is as important as clean water or nightly shelter, so the removal of such a basic amenity—even in a precarious law-and-order situation—is contrary to the government’s own stated development goals and its proud status as the world’s largest democracy. Two months without internet is a long time. For Kashmiris, rather than a security measure, it feels more like collective punishment.

Hasit Shah is a journalist based at Harvard University’s South Asia Institute, where he researches the emergence of digital media in India.