‘We Will Not Surrender': Opposition Voices Rally to Support Turkey's Besieged Media

Just over three months have passed since an attempted coup in Turkey prompted a wide-reaching crackdown on supposed supporters of Fethullah Gulen, the US-based Islamic cleric whom the Turkish government accuses of masterminding ta bloody coup attempt on July 15.

While few in Turkey question a link between Gulen — a former ally of President Recep Tayyip Erdogan's who became a fierce rival — and the initial plot, opposition figures have labelled the government's subsequent mop-up campaign a “purge”.

That purge has targeted independent media as well as military personnel, civil servants and opposition politicians.

Cumhuriyet newspaper – a thorn in the government's side

On October 31, police raided the Istanbul headquarters of Cumhuriyet, a daily newspaper with a circulation of over 50,000 across Turkey. In addition to the raid on the office, 13 executives of the newspaper had their houses searched and were arrested alongside Editor-in-Chief Murat Sabuncu.

The detained members of Cumhuriyet stand accused of “committing crimes in the name of FETO and PKK terrorist organizations without being members of them.” FETO (Fethullah Gulen Terrorist Organisation) is the moniker given to Gulen's Hizmet (‘Service’) movement by the Turkish government.

The attack on the newspaper comes as no surprise to anyone following deteriorating press freedoms in Turkey.

Turkey ranks 151st in Reporters Without Borders world press freedom index. The country will likely plunge further in next year's rankings, with some 127 journalists arrested in the space between the most recent raid and the July coup attempt. Other journalists have been slapped with travel bans.

A day prior to the Cumhuriyet raid, several Kurdish news organisations were also targeted. Turkey's only Kurdish language newspaper, Azadiya Welat, was shut down, as were the DIHA and JINHA news agencies.

Cumhuriyet gained international attention in 2015 after it published an investigation into arms shipments to jihadist groups in Syria, purportedly overseen by the Turkish state intelligence agency MIT.

That investigation led to a court case against Can Dundar, the newspaper's previous Editor-in-Chief, and Erdem Gul, its Ankara bureau chief. In May this year, Dundar and Gul were both handed sentences of over five years. Dundar, who narrowly escaped assassination outside the court building, was allowed to leave prison pending an appeal and is now living in Germany. He has stepped down from the Editor-in-Chief position, while Gul is still waiting on the result of his appeal in Turkey.

In September, the newspaper was awarded the Right Livelihood Award, popularly known as the ‘Alternative Nobel Prize’, alongside The White Helmets.

The front page of Cumhuriyet's November 1 edition declared ‘we will not surrender’, in what amounted to a rallying cry for press freedom in Turkey which quickly began to trend on Twitter. 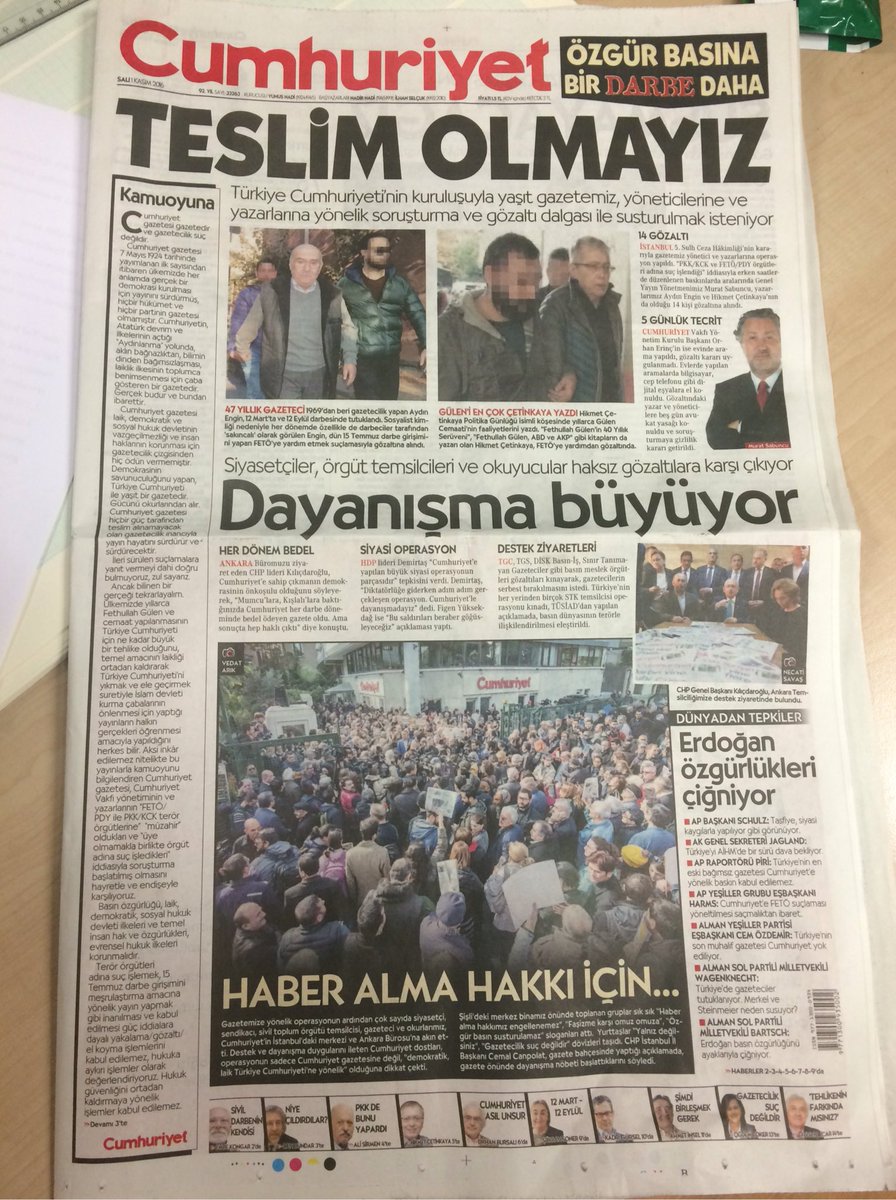 The newspaper pointedly left the columns of writers Hikmet Cetinkaya and Kadri Gursel, both detained on October 31, blank.

Cumhuriyet is widely regarded as one of the few opposition newspapers left in Turkey. While the newspaper was for decades a bastion of secular republican opinion, widely read by supporters of the main opposition Republican People's Party (CHP), in recent years Cumhuriyet became an outlet for more liberal and leftist voices.

CHP politicians have spoke out against the arrests.

We saw, we heard, we know; this is dictatorship! But we will not surrender

After news of the raid broke, readers and supporters of Cumhuriyet gathered to protest at the newspaper's headquarters in Istanbul. Protestors were met with water cannons and seven students were detained, though they were later released.

Readers of @cumhuriyetgzt in front of newspaper building to show solidarity amid police raid & detention of writers. pic.twitter.com/xWfzFb6cWj

The detained newspaper executives and employees have been denied access to legal counsel. The raid was also followed by a ban on reporting on the arrests.

Government supporters accuse the newspaper of supporting the pro-independence militants in the Kurdish PKK and the Gulenists, charges its management and employees have always denied.

By printing anti-government articles after the coup attempt, they say, Cumhuriyet “[stirred] public disorder in line with the aims of the Fethullahist Terror Organization (FETÖ).”

The campaign against Cumhuriyet has taken many forms. On November 2, an anonymous author claiming to be a former employee of the paper wrote in Sabah, a newspaper with very close ties to the ruling Justice and Development party (AKP), that Cumhuriyet had received significant financial aid from Gulen-linked organisations in recent years.

Various commentators, including former AKP MP Resul Tosun, have pointed out that the publication has never expressly exhibited any Gulenist support. Some even noted that arrested columnist Hikmet Cetinkaya is the author of several books critical of Gulen, although this has not stopped Sabah accusing Cetinkaya of converting to the Gulenist cause.

Cumhuriyet, which called the Gulenists terrorists in 2002, has been declared FETO. Who? Those who called FETO ‘Our Honourable Teacher’ are hypocrites!

[Headline reads: The Gulenists are a terrorist organisation]

Ironically, one of the prosecutors assigned to the Cumhuriyet case is also being investigated for links to Gulen. A terrorism probe against the journalist who exposed this link, Baris Pehlivan, has now been opened.

Last month, Cumhuriyet published an article alleging that old executives were attempting to retake control of the newspaper.

Two former executives of the newspaper, Alev Coskun and Mustafa Balbay, who is now a CHP MP were amongst those accusing the newspaper of ties to Gulen. Coskun, supposedly on Erdogan's advice, filed a complaint against the 2013 board reshuffle which sidelined the pair.