Newsstand in Beijing. Photo by Ernie via Flickr (CC BY 2.0)

The WeChat account of Chinese news outlet News Breakfast was recently suspended for “spreading rumors.” News Breakfast has 400,000 subscribers in WeChat and is operated by East Day, a Shanghai city government-affiliated media outlet.

The so-called rumors appeared in a News Breakfast article entitled “Uncover the Truth: Why Are Devious Roast Ducks Sold for RMB 19 Yuan? The Truth Will Shock Everyone.”

The incident compelled Xu Shiping, the CEO of East Day, to write two open letters to Pony Ma Huateng, the chairman of WeChat's parent company, Tencent, questioning the monopolized status of the Internet giant and its arbitrary power over online content and censorship. Like many other Chinese news outlets, News Breakfast publishes some stories only on WeChat, rather than publishing on its website and then promoting on the social media and content service.

Xu, who has 33 years of experience working in media, is now openly expressing concern that Internet corporates may soon be more powerful than the state and the party.

At the center of the controversy is a typical “click bait” article, attempting to amass lots of views. The article maintains that most of the roast ducks sold on the streets in Shanghai are diseased, and that this is the reason why they are only sold at RMB 19 yuan each [approximately USD $3].

A few years back, People Daily reported that these claims had caused harm to one roast duck shop which sold duck meat at a low price to the poor, while selling duck livers and intestines to the rich for much more. But the report could not rule out the fact that some roast ducks sold on street were diseased. Many similar posts remain in circulation online.

In China, where all media outlets are either state or party affiliated, it is customary for managers of media outlets to directly negotiate with government censorship administrators to lift a website's access ban after sensitive content has been removed. But as social media increasingly becomes the main channel for media outlets to distribute their contents, much of this decision-making power lies in the hands of Internet companies, and each company has different house rules.

In the first of two open letters to Tencent Chairman Ma, published on November 4, Xu contends that Tencent’s rules are more rigid than those of the Party and state censor authorities:

I couldn’t sleep for the past two days. Because I feel that I have encountered a very serious matter. This is not a big issue on the surface but it concerns the dignity of the ecology of Chinese public opinion and journalism. I have to speak out about it.

I have been working in the journalistic field for 33 years. I graduated from the journalism department of Renmin University in 1982 and was assigned to “Xinmin Evening News”, a newspaper with the longest history in China. I worked on sports news and commentary section and Xinmin’s sport post respectively. Later I helped found the East Day and have been their editor ever since. This experience has made me understand that with all media, whether they are conventional newspapers or new media organizations, there are certain management [i.e. censorship] tactics…intended to shape news and media ecology and we have to abide by them. The administrators are professionals.

Unfortunately, I don’t know if Mr. Ma has the ambition to take this to another level, or if you are simply bold but too ignorant. Under your leadership, Tencent is ready to become the administrator of the [journalism] industry. Right, your corporate is huge, WeChat is awesome, so many local governments and media have to kiss your ass. But it doesn’t mean that you have the ability and qualification to become an administrator. Because you are not professional.

News Breakfast received a 7-day account suspension notice issued on November 2 and his failed to up lift the sanction through official propaganda channel:

My staff are very naive, they filed an appeal online. I [learned from my Tencent personal account experience] that these appeals are useless…

Since I had the experience of running a Shanghai propaganda authority’s website, I want to appeal to Tencent on the matter through an official channel. I know it is pathetic that the fate of media organization depends on others […] but I'm still going to do it. The circumstances compel me to do so. The official policy is that government and party authorities have to pick up new media communication by making use of mobile news outlets through Weibo and WeChat. And the impact of the news outlet is mainly based on the number WeChat subscribers […] We have to keep our rice bowl, feed our family and live on.

In order to have influence in the online media environment, many state and party affiliated news media also use content farm strategies to increase their subscriber base.

Xu eventually made calls to two friends who work for censorship authorities, seeking their help to resolve the problem. But his effort was in vain:

My friends told me they had delivered the message [to Tencent]. I was relieved and went to sleep. But I was too naive. The next day, “News Breakfast” account was still suspended. 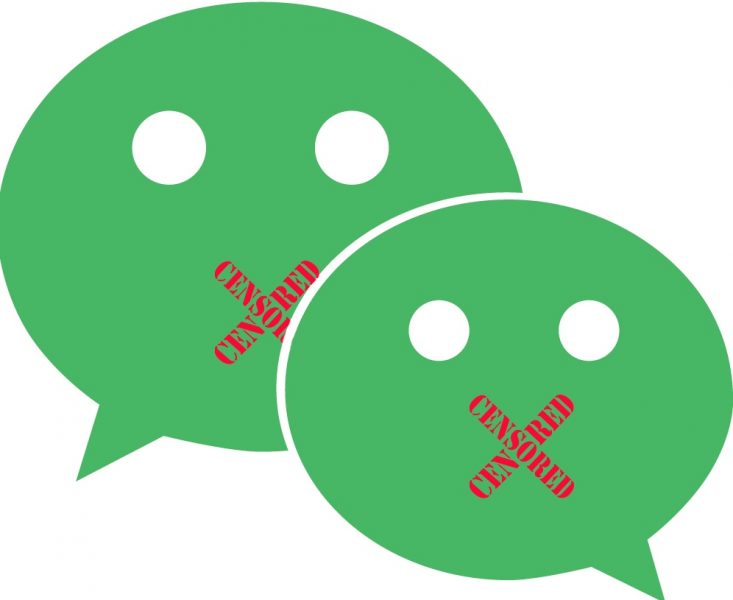 Feeling desperate, he criticized Tencent’s monopoly as being harmful to the state:

What is Tencent? It is an Internet company. It has a capital structure and cannot represent people’s interests […] In the past two years, Mr. Ma has been a guest of local governments which have provided corporate access to data which should be belong to the public. There is no evaluation of the capital value of such data access. […] Tencent’s monopoly is harmful to the state. Wait and see. Today it can exercise its unrestrained power on media outlets, tomorrow it will challenge state authority. […]

I have been hesitating to write this letter. Many have warned me against this move as “News Breakfast” has to survive and East Day still have a bunch of WeChat public accounts. The business profile depends on WeChat data etc. But I am a media person and should have dignity. I should not bow for my rice bowl. If one day, all China’s media outlets are under the rule of Tencent, can we still have our “China Dream”?

1. The roast duck content has been flagged as rumor by various official media outlets since 2014 as it would result in social panic.

2. This is not the first time “News Breakfast” has broken rules on spreading rumor and copycat behaviors. When violating the rules, the content will be deleted and the account will be automatically suspended when the violation has accumulated to a certain points.

3. Tencent has a pre-existing appeal system, the case has been filed and sanction maintained.

4. The administrator applies the same judgement to all media outlets. For “roast duck” related content thus far WeChat has deleted more than 2000 posts and sanctioned 1000 accounts.

Tencent’s 2016 first quarter report showed that WeChat has 762 million monthly active users. About 80% of the users are subscribed to public accounts.

As Xu’s first open letter has been taken down on major social media outlets, he wrote a second open letter, restating his points in a more moderate tone of voice.

The suspension appears to be a result of China's recently-passed cybersecurity law, which makes censorship a corporate obligation. Under the law, all Internet service providers must maintain an internal corporate censorship system. Tencent combines this with a system through which individual users can file abuse reports, in accordance with foreign social media platforms such as Facebook.

Many analysts see the introduction of cybersecurity law as a legal basis for China's Great Firewall and for the codification of censorship practices. The laws also provide a legal framework for corporations to establish a self-censorship system, a move intended to reduce the labor costs of censorship for the government.

Can censorship be codified in China?

Though many Chinese Internet users are critical of censorship, in this particular case, they are not standing by Xu because they feel that what Xu really cares about is who control the power of censorship. A Weibo user pointed out:

East Day’s CEO is shameless. Many have misread his open letter. It’s main argument is not only that “Only Dad can hit me, you don’t have the power to do so” but “You son of bitch don’t leave the back door open to me. This is a lawless act against one party rule.”

While there have been many criticisms of the Cybersecurity Law from the foreign Internet companies, some may see a clearer set of written laws on existing internet censorship practices (which quite often are arbitrary and inconsistent) can help the business to develop a legal strategy when entering China. But in a country where the party is still on top of the law, and now one party cadre has spoke out his discontent on report-based self-censorship system. New rules will keep emerging.