‘The Long Arm of the Kremlin': Kazakh Man Goes to Prison for Insulting Vladimir Putin on Facebook 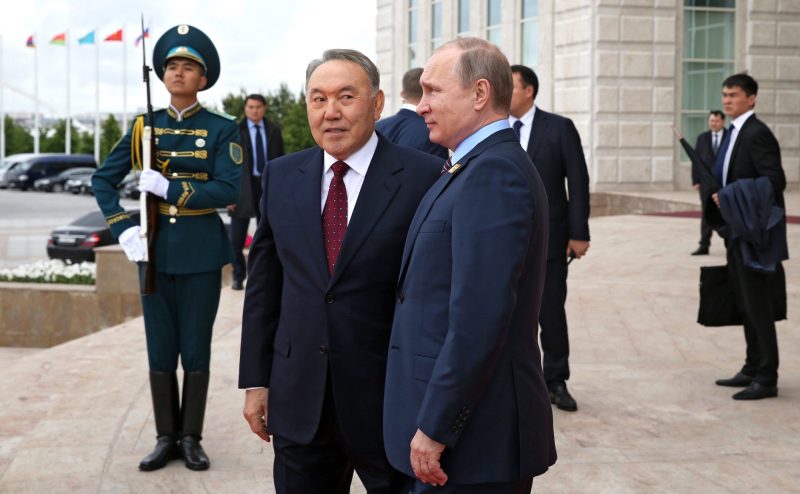 Sanat Dosov, a prominent Kazakh Facebook user, and businessman, was sentenced on December 27 to three years in jail for insulting the head of a foreign country — Russian President Vladimir Putin — on Facebook.

The case represents more evidence of the authoritarian Central Asian state's attempts to set criminal boundaries for online discussions. While relations with Russia are clearly important to Kazakhstan, Dosov's sentence could also be seen as part of a wider effort to bring political discourse on social networks into line with the Kazakh government's own thinking.

Writing for online magazine The Diplomat, Central Asia analyst Catherine Putz noted that Dosov received the sentence for regularly posting criticism of Putin and the Kremlin: 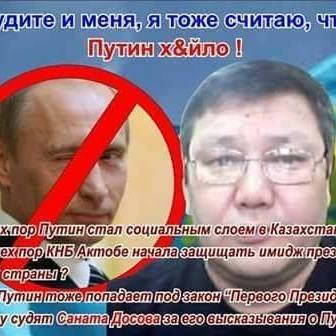 Profile pictures in support of Dosov.

Ratel.kz reported in late November on Dosov’s case that the […] posts criticizing and insulting Putin were what led to the charges. The article included photos of what appear to be court documents, outlining the offending posts, from late 2015 to early 2016.

For example, on December 4, 2015, Dosov shared a meme which depicted the faces of Lenin, Stalin, and Putin. A few days earlier he shared a news story from a Ukrainian site [describing a joint agreement between Turkey, Kazakhstan, Azerbaijan and Georgia to bypass Russia in transporting goods between them] with a comment calling Putin “the enemy” and a “terrorist.” Dosov frequently shared news stories and memes critical of Putin and Russian policy, particularly with regard to Ukraine and Syria.

Putz also wrote about the problematic nature of the article under which Dosov was charged:

Dosov was charged under the infamous Article 174 of the Kazakh criminal code, which outlaws actions aimed at inciting “social, national, generic, racial, class or religious hatred” as well as the “insult of the national honour and dignity or religious feelings of citizens” and “propaganda of exclusivity, superiority or inferiority of citizens on grounds of their relation to religion, class, national, generic or racial assignment.”

Article 174 is about as vague as possible and Kazakhstan’s justice system has taken advantage of that vagueness to jail several in the past two years, particularly for social media posts. Last Feburary, Bruce Pannier outlined the cases of several victims of Article 174 for RFE/RL, commenting, “Listing those who have been detained and incarcerated on this charge, one could get the impression Article 174 is being used as a tool to remove inconvenient individuals.”

Dosov, whose profile also includes anti-semitic postings, may have been singled out because of his large Facebook following. He has nearly 5000 friends on the service.

Several of them posted pictures in his support. The profile pictures dared the Kazakh government to come after them: “Jail me too. I also think Putin is a dick.”

One Kazakh, a Twitter user, who shares Dosov's surname, joked:

Some Dosov has been put in jail for 3 years for his views that Putin's Russia is a fascist state. It is a serious warning to all Dosovs.

The long arms of the Kremlin: In Kazakhstan, they have jailed their own citizen for criticising Putin's regime.

Dosov's arrest appears to be consistent with the government's treatment of mainstream media, which is not able to report on politically sensitive topics such as ethnic conflicts in local communities. With media in the country heavily restricted, social media is an obvious forum for information warfare between the two groups.

Kazakhstan has jailed and put on probation several social media users for posts deemed to promote ethnic Kazakh concerns, in a country where over a fifth of all residents are ethnic Russians.

But this can go both ways. Kazakhstan also sentenced this month an ethnic Russian user of the Russian social media service Vkontakte to five-and-a-half years for calling on the north of the country to break free and join Russia. In the Northern Kazakhstan administrative region, ethnic Russians represent a plurality of the population but are weakly represented in national-level politics.

Generally, Kazakh nationalist complaints relate to the country's relations with Russia and the well-being of the Kazakh language. Although it is the “state language” under Kazakhstan's constitution, it is less frequently spoken than Russian (the country's “official language”) in several of the country's largest cities.

Moreover, while Russia is a key ally for Kazakhstan, Putin's military ventures in Ukraine have created major headaches for the country that 76-year-old President Nursultan Nazarbayev has ruled since before independence in 1991.

Kazakh authorities began targeting social media posts with renewed intensity in the aftermath of Russia's annexation of the Ukrainian territory of Crimea in 2014. The event fuelled rancour in Kazakh social media circles where many users were quick to side with either Moscow or Kiev.

Anti-Kremlin sentiment then peaked in August of that year after Vladimir Putin commented that Kazakhstan had “never had statehood” prior to independence from the Soviet Union, adding that the country had “a big territory” with a “small population.”

Whether the remark was a backhanded compliment to Nazarbayev — the two leaders are reportedly good friends — or “a shot across the bow” after Nazarbayev had declared his dissatisfaction with a Kremlin-backed regional integration project, the fallout was immediate.

Kazakhstan subsequently announced plans to celebrate the 550th anniversary of the founding of the Kazakh Khanate in 2015, which many Kazakh historians view as a precursor to the Kazakh state whose boundaries were affirmed during the Soviet period.

More recently Kazakhstan also pandered to ethnic nationalists by demanding — and securing — the return from Russia of the skull of a Kazakh rebel killed by the Red Army in the tumultuous early years of communist rule.

Tensions between Kazakhstan's anti-Moscow ethnic nationalists and Kremlin sympathisers are unlikely to subside anytime soon, and may grow as uncertainties over the post-Nazarbayev future of the republic deepen.