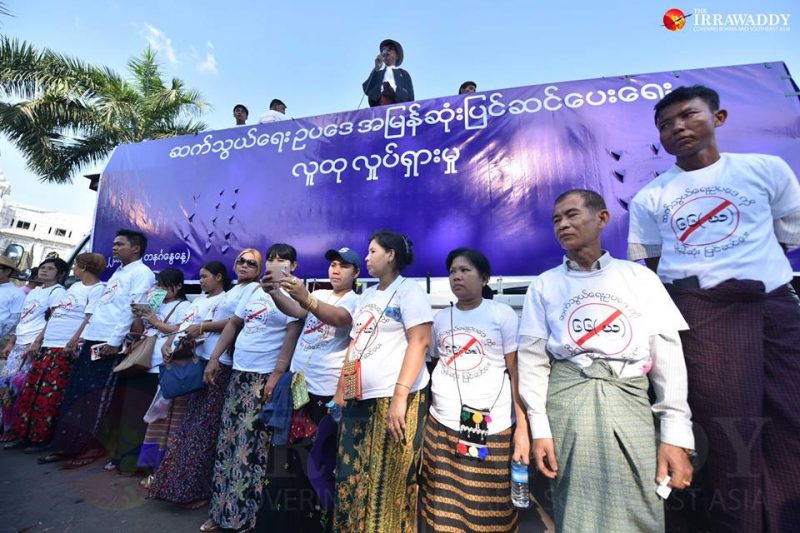 Members of the Committee for Amending the Telecommunications Law hold a rally to call for the removal of the controversial section 66(d) of the law. Photo from the Facebook page of The Irrawaddy, a content partner of Global Voices.

Myanmar’s military-backed government lost the 2015 elections, but the measures it implemented to silence dissent are still the law of the land.

This includes the “Telecommunications Law,” which was passed in 2013 to promote foreign investments in the Information Technology sector and protect technology providers and users. But despite this clear objective of the law, many officials interpreted section 66(d) as a useful legal basis to file defamation charges against their critics.

Since its passage, 48 defamation cases have been filed in the courts invoking section 66(d) of the law. Last year, even with the former opposition party National League for Democracy taking control over the government, 29 people were still arrested for breaking this law.

Section 66(d) states that whoever uses a “telecommunication network to extort, threaten, obstruct, defame, disturb, inappropriately influence, or intimidate” can be “punished with imprisonment for a term extending to a maximum of three years, and shall be liable to fine or both.”

For many activists and journalists, the wording of this provision is vague and it can be narrowly interpreted to accuse anyone of defaming another person.

Since last year, Section 66(d) has gained notoriety for being a legal tool used by senior military officials against their critics in the mainstream and social media.

Despite the defeat of the party it backed in the elections, the military continues to wield strong influence in the bureaucracy. The Constitution it passed in 2008 guaranteed military representation in the parliament and the Cabinet.

Worried about the increasing number of Section 66(d) cases, some activists, scholars, and journalists formed the Committee for Amending the Telecommunications Law (CATL) to persuade the parliament about the urgent need to reform the law.

They asserted that section 66(d) is unnecessary because defamation is already covered by existing provisions in the Penal Code.

The CATL argued that, under Section 66(d), a person accused of defaming someone can be detained without being given the right to bail. A third party can also file a case on behalf of another person, which explains why some cases involving the military were initiated not directly by army officials but by civilians.

In Burma , the NLD Government is taking charge the people who critize them with
Article 66 D Act. WE SAY NO TO 66D. pic.twitter.com/5mRGMZPjeK

Bo Kyi of the Assistance Association for Political Protection believes that defamation can be addressed with less severe punishment:

Article 66(d) of the Telecommunications Law should be removed—it is better for the country’s future if we try to solve problems by discussing them patiently while fostering the culture of democracy and compromise from all sides.

Human rights lawyer U. Robert San Aung agreed that the law needs to be overhauled:

It is not appropriate that a citizen who criticises someone more powerful should face legal action of this kind.

We have to raise a question why this law doesn’t take effect against those who spread religious hate speech online. There are sexual abuses against women online but this law can’t prevent them. The law only takes actions against those who insulted state leaders … The law is being used with impunity.

The activist is referring to the rising anti-Muslim sentiment on social media spearheaded by radical Buddhists. Myanmar has a Buddhist-majority population. Some radical Buddhists are accusing Muslims of plotting to displace Burmese residents from their communities.

Aside from public officials, ordinary citizens have also invoked section 66(d) against their critics and online trolls on social media. Writer Moe Thet War explained how the law has affected the behavior of many Internet users in Myanmar:

Ever since the creation of Section 66(d), citizens have become hesitant to publicly share anything on Facebook, even if they're actually pointing out someone else's wrongdoing.

Moe Thet War used the cartoon below to illustrate how a thief can accuse a Facebook user of committing a crime if the latter uploads an “insulting” photo on the popular social media platform.

This cartoon pretty much sums up Section 66(d) of the Telecommunications Law https://t.co/gt7fWJyB72 pic.twitter.com/N9nVqje5NQ

The CATL organized a rally in mid-January to press for the removal of Section 66(d). In response, the parliament said it is willing to review the law and address the negative impact of Section 66(d).