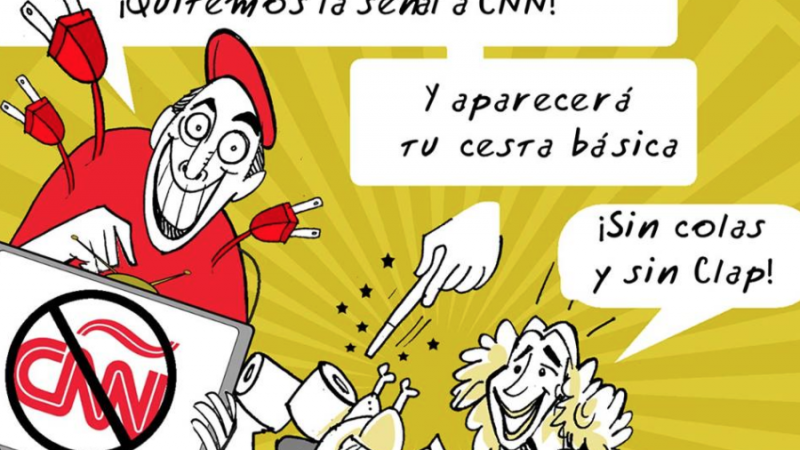 “Let's get rid of CNN's signal and your basic food basket will appear.” Detail from the series “Se acabaron los problemas” (The problems are over) by Eduardo Sanabria (EDO). Used with permission.

The government of Venezuela and the channel CNN in Spanish had their final clash on February 15 when authorities issued an official order to remove the channel from cable and satellite TV stations.

CNN contends that the order came in response to their story “Passports in the shadows“, in which they alleged that Venezuelan consular staff illegally sold visas and passports to Syrian and Iraqi citizens.

The National Communications Commission (Comisión Nacional de Comunicaciones, or CONATEL in Spanish) took the measure as part of a process of sanctions against the channel. CONATEL's statement did not identify the passport story as part of their rationale, but accused CNN of “distorting the truth” and inciting “external attacks”:

This is due to the fact that without convincing arguments they inappropriately defame and distort the truth, leading to probable incitement of external attacks against the sovereignty of the Bolivarian Republic of Venezuela

Foreign Minister Delcy Rodríguez accused the channel of being at the service of US military operations and conducting a military media campaign against Venezuela.

Social media was quick to react to the measure, especially after CNN in Spanish announced that it would broadcast for free via YouTube. This was seen by some readers as a mockery of the attempt at censorship:

Even those who didn't watch CNN will watch it now, and for free. Thank you CNN in Spanish for your dedication to Venezuela.

Those who support the Venezuelan government's measure express their concern about the effects of stories like “Passports in the shadows” and accuse its authors of supporting plans for foreign intervention in Venezuela, as in this open message posted on Facebook by Luigino Bracci Roa:

Friends, I know that the CNN measure might seem like an overreaction. But did you think the programme “Passports in the shadows” broadcast by Fernando del Rincón last week was no big deal? They were accusing Venezuela of SELLING PASSPORTS en masse to Hezbollah “terrorists”, to carry out an ATTACK ON THE UNITED STATES […] DOES THAT NOT SEEM LIKE A BIG DEAL TO YOU? Don't we remember what happened in Iraq and Libya? Quite apart from the question of whether or not Trump might initiate an attack against Venezuela, it's still necessary to react against these kinds of smears.

Another blow to freedom of expression

The other side of social media sees this measure as one more way to censor the media and make information invisible:

EDO cartoon for @ElNacionalWeb: Find the 4 differences. They kicked out CNN.

Nevertheless, the strategy might not make much difference, as CONATEL has also announced plans to limit CNN's signal on the Internet. In addition, the quality of Venezuela's Internet connection is an important factor in limiting access, not only for CNN in Spanish, but also for information shared online.

Venezuelans have one of the slowest and most precarious internet connections on the continent. Thus, beyond the measure taken against CNN, access to information online in Venezuela represents for many a form of collaboration with disinformation.

The problem becomes even more complex when we consider Venezuela's complicated foreign currency exchange controls. Telecommunications companies in the country say that the lack of access to dollars affects the quality of service and the companies’ livelihoods. In April 2016, telecom companies complained that foreign currency that was supposed to be available for them to pay their connection service providers had not been approved for 18 months.

Similarly, the companies claim that the maintenance of their equipment is also affected by the limitations on purchases and imports. These complaints resonated at the time, but the debate around them has faded. Months later the conversations about the telephone companies were linked to certain changes in the fees charged to private customers, which CONATEL later ordered them to cancel.

CNN's departure from Venezuelan screens further reduces the number of channels providing information that is independent of the Venezuelan government. The vast majority of Venezuelan media outlets have been nationalised, bought by entities linked to the governing party or have reduced their informational content in order to survive the official pressures of Chavismo. Indeed, this is not the first time CNN and the government of Venezuela have clashed — but it may be the last.

On other occasions CNN in Spanish has been accused of disseminating information intended to destabilize and show a biased view of the facts. CNN may have its flaws, but in a media space that is overwhelmed with pro-government tendencies, a news organization with a bias in the opposition direction is not such a bad thing. The blocking of CNN only further reduces the plurality of views in Venezuela's increasingly narrow realm of public opinion.