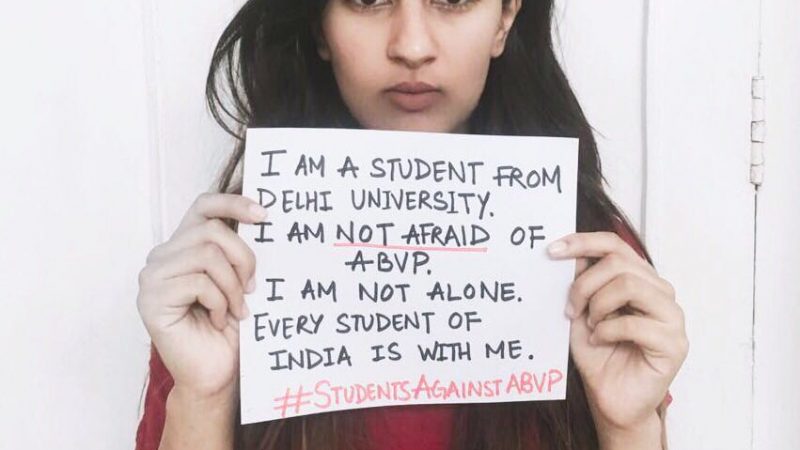 Gurmehar Kaur started the campaign after a recent altercation between protesters and the right-wing student group Akhil Bharatiya Vidyarthi Parishad (ABVP), which has ties to Hindu nationalist organizations.

On Feb. 21, a conference titled “Culture of Protest” was scheduled to take place at Delhi's Ramjas college. The event was supposed to feature comments by activists Umar Khalid and Shehla Rashid, both known for supporting the “Free Kashmir” movement, but the speeches were canceled in response to major protests by members of the right-wing student group ABVP, who vandalized the college in retaliation for inviting to campus a man accused of sedition in 2016.

After ABVP's demonstrations, students, teachers, journalists, and activists staged a counter-rally in support of the invitations to Khalid and Rashid. Things got violent when ABVP members showed up and started fighting with demonstrators. According to reports, several activists were injured, and some women were threatened with rape.

In protest, Gurmehar Kaur posted a photo with the following message on Facebook on Feb. 22:

“I am a student from Delhi University. I am not afraid of ABVP. I am not alone. Every student of India is with me. #StudentsAgainstABVP”

The brutal attack on innocent students by ABVP is very disturbing and should be stopped. It was not an attack on protestors, but an attack on every notion of democracy that is held dear in ever Indian's heart. It is an attack on ideals, morals, freedom and rights of every person born to this nation. The stones that you pelt hit our bodies, but fail to bruise our ideas.
This profile picture is my way of protesting against the tyranny of fear. If you are a student in any Indian university, in any Indian state and you wish to protest against ABVP then take a similar selfie and make it your profile picture. Use the hashtag #StudentsAgainstABVP and copy paste this message along with it.

It's time for every student of India to unite! Jai Hind! Jai Democracy!

With this, the #StudentsAgainstABVP campaign was off. Soon students across India started changing their profile pictures, on social media, to protest against the violence.

@NSUIJMI strongly condemn the attack on university discussions and stand in solidarity with #DU. #StudentsAgainstABVP pic.twitter.com/ZC3Dp7Uzzv

I am a student of #DelhiUniversity and we don't want hooligans in our campus. I am with @MeharTweets.#StudentsAgainstABVP

Very brave of #GurmeharKaur to take on the #ABVP goons! sadder to see ppl like sehwag & hooda trivializing the issue!

Kaur hasn't won over everyone, of course, and some Internet users are adapting her hashtag to convey the opposite message:

Dear AISA, the truth doesn't remain hidden for long!
The neutral students of DU have started to raise their voice #ABVP #Ramjas pic.twitter.com/JLDObGJXP1

Below, you can find a video of Gurmehar Kaur “talking” about peace between Pakistan and India. Her father was killed in the India-Pakistan War.

Kaur has come under fire for saying in the video, “My mother held me back and made me understand that Pakistan did not kill my dad, war killed him.”

Internet users like Anand Ranganathan have defended her against what they call attacks by trolls:

Here is the complete text of what @mehartweets said in that video. Shown in red is the part-sentence that was taken out to troll her. pic.twitter.com/Tj0KSex67o

Indian Home Minister Kiren Rijiju is the latest to join in the controversy, asking on Twitter about Kaur, “Who's polluting this young girl's mind?”

Who's polluting this young girl's mind? A strong Arm Force prevents a war. India never attacked anyone but a weak India was always invaded. https://t.co/gXHkAGi9sh

Another lawmaker from the ruling BJP, Pratap Simha, compared Kaur to the terrorist Dawood Ibrahim.

Kaur's supporters counter that she has a right to free speech, which they argue has “deteriorated” lately in India, thanks to state officials and right-wing activists who they say are too quick to slap a “sedition” label on all political dissent.

So, @mehartweets welcome to measuring the effectiveness of your public message in bulk hate messages. Bullies panic when confronted.

Don't call me a Martyrs daughter if that bothers you. I never claimed anything otherwise. You can call me Gurmehar.

Hats off to you for standing your ground, @mehartweets. A strong young woman like you gives us hope for India's future. https://t.co/tSNmMtoNvf

Not surprising that “nationalists” mock @mehartweets for one pic out of an entire series. Their vision as always is limited by their hate. pic.twitter.com/SCzRL76Jf7

Kaur has received rape and death threats on social media from individuals calling her an “anti-national” agent. She filed a complaint on Feb. 27 with the Delhi Commission for Women, identifying several Twitter accounts that have been threatening her.

Why is it that ‘nationalists’ routinely resort to rape threats when confronted? https://t.co/kwKFzyKMIS

The events at Ramjas College are a shameful reminder of how intimidation and threats continue to restrict free speech on university campuses.