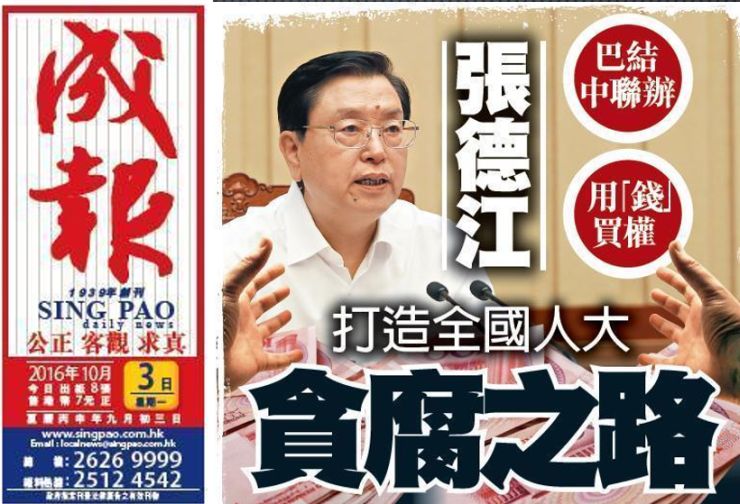 This post was written by Ellie Ng and originally published on Hong Kong Free Press on February 27, 2017. The version below is published on Global Voices under a partnership agreement.

The pro-Beijing Sing Pao Daily says its staff are being targeted after it published numerous stories critical of China’s no. 3 official Zhang Dejiang, Hong Kong Chief Executive Leung Chun-ying and the China Liaison Office, Beijing’s organ in the city.

The Chinese-language paper said threats against its staff have recently intensified and that its employees have sought police assistance four times within a week. The latest report filed to police was made in the early hours of February 26, after the apartment door of a Sing Pao senior editor was smeared with red paint.

According to Sing Pao, the senior editor returned home under the protection of police officers. They found the front door of his house covered in red paint, which is often used as a symbolic warning. There were also photographs of the editor and posters of Sing Pao Director Gu Zhuoheng posted on the property’s walls.

The paper suspected someone hired local triad (organized crime group) members to commit the act. It “strongly condemned” the unlawful acts and urged the police to arrest the culprits.

Sing Pao said the threats were likely meant to silence the newspaper, which is known for its anonymous attacks against the political syndicate associated with senior official Zhang Dejiang, Leung Chun-ying and the Liaison Office.

The Hong Kong Journalists Association said in a statement on February 26 that it “strongly condemns the escalating violence and threats” against the paper:

The campaign of terror, which has been going on for more than a week, is on the surface an outrageous attempt to silence the paper.

This is an outright challenge to law and order in Hong Kong as well as a threat to press freedom which is enshrined in the Basic Law.

The association urged the authorities to set up security efforts to protect Sing Pao’s staff and make arrests.

A police spokesperson said the force was “very concerned” about the incidents. It said the Kowloon East Regional Crime Unit is following up on the case and will provide protection to the relevant persons.

Last week, the paper issued an urgent statement saying that individuals had posted leaflets threatening its management personnel outside their homes. It claimed that photographs in the leaflets were likely taken from the managers’ home-return permits – travel documents issued by the Chinese authorities for Hong Kongers to enter mainland China.

The paper also claimed that “a large number of suspicious individuals who look like mainlanders” had been loitering outside its offices and following its managers since mid-February.

It added that its website fell victim to two cyberattacks on February 18 and 19.

The paper suspected the threats were politically motivated and “intended to sway the result of the chief executive election.” It accused Leung and the China Liaison Office of being behind the attacks, charging that the threats were “aimed at suppressing dissent.”

Last month, Sing Pao reporters were denied for the first time access to a Lunar New Year dinner organised by the Liaison Office. The paper said its reporters were told by a receptionist: “You are not welcome to report on our event.”

Since last August, Sing Pao has been running anonymous commentaries attacking Zhang, Leung and the Liaison Office. It claimed that “corrupt officials” in Hong Kong would be stripped of power.

It also said that Leung would not be allowed to seek re-election, days before the chief executive announced that he would not be seeking a second term.

These threats have led to speculation that Hong Kong’s pro-Beijing camp is fragmented and that Chinese President Xi Jinping is prepared to eradicate a powerful sector within the Communist Party.