Thailand’s Ministry of Digital Economy and Society is telling Thai citizens to unfriend and unfollow three government critics, lest they be accused of violating the 2007 Computer Crimes Act.

Somsak is a historian who taught at Thammasat University in Bangkok for two decades until he was fired over his criticism of the 2014 military coup that brought the current government to power. Pavin is a lecturer based in Japan. Marshall is a Reuters correspondent formerly based in Bangkok, whose book about the Thai monarchy was banned in Thailand in 2011. Aside from being critics of the Thai government, they are all accused of violating the Lese Majeste Law (Anti-Royal Insult Law). All have left Thailand to avoid political persecution.

Below is an excerpt of an unofficial translation of the letter issued by MDES:

To ensure an offense is not committed (intentionally or unintentionally) in relation to the Thailand Computer/Cyber Crimes Act (2007), Thai citizens are urged to avoid following, contacting, sharing (directly or indirectly) the content of the below mentioned people on the internet and social media. 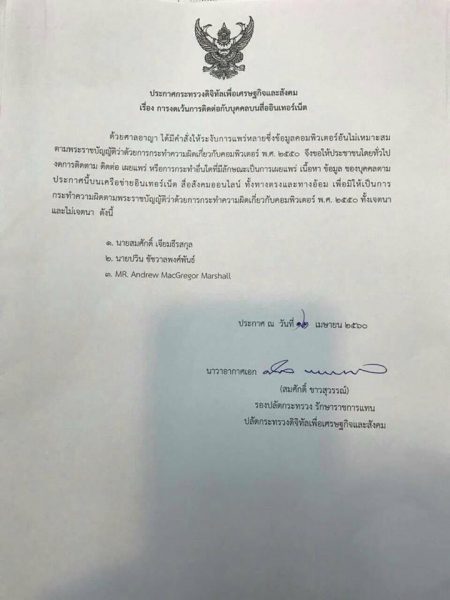 Letter issued by Thailand’s Ministry of Digital Economy and Society. Image from the Facebook page of Andrew MacGregor Marshall

The army grabbed power in 2014 and continues to dominate the bureaucracy through the Constitution it drafted in 2016. It imposed a strict regulation of the media aside from aggressively implementing the pre-existing Lese Majeste Law, which some analysts believe is intended to silence the opposition and other critics of the junta.

The MDES letter is the latest attempt of the junta to control the media and intimidate its critics. Previously, it “invited” journalists and activists for an “attitude-adjustment session” in army camps. It also jailed an activist for sharing a BBC article about the profile of the country's new king.

The letter does not explain why it is a crime to follow, contact, or share the social media accounts of Somsak, Pavin and Marshall. It also does not describe the alleged crimes committed by the exiled critics.

To avoid unnecessary legal problems for his followers, Marshall immediately urged his Thai friends to unfollow him on Facebook:

I'd like to request everybody who may be at risk to unfollow me immediately and be extremely careful about commenting on or sharing my posts.

This is a ridiculous and oppressive order but I don't want any innocent people being targeted just because they follow my journalism.

He also reminded Thai authorities that “nobody ever wins by trying to suppress the truth”:

I am much less of an expert on Thailand than Ajarn Somsak and Ajarn Pavin. I am just a farang [foreigner] journalist doing my best to report the truth, because I believe that Thais deserve to know what is really going on, not lies and propaganda. Thai people are smart enough to think for themselves and decide what is true and what is not. Nobody ever wins by trying to suppress the truth.

Pavin wrote that he and his university colleagues speculated on the limits of the rule:

Some professors and students at Kyodai asked me this morning whether it would be illegal to contact me via FB and send me homeworks to my email, since the Thai authorities warned that in so doing they could be charged…

Instead of reducing the online followers of the three critics, the unintended effect of the letter and the subsequent media hype it generated is increasing the popularity of the banned social media accounts. Marshall wrote that he has accrued an additional 700 Facebook followers since the junta released the letter:

The net change in my Facebook network since the Thai junta told people to sever social media contact is now +700 followers.

This cartoon poked fun at the letter and how it made the critics more famous inside and outside Thailand:

Despite the absurdity of the ban imposed by the junta, its political impact is no laughing matter. The Southeast Asian Press Alliance warned that the letter “tries to limit the choices of the people and influence their behavior by implying risks of violating the law.”

Jaran Ditapichai, a former Thai Human Rights Commissioner who also fled the country after being accused of Lese Majeste, urged international institutions to look into the issue:

This order not only violates human rights, especially free speech and the right to communication, but also affects all Thai citizens. I urge all international and national human rights organizations to investigate the Thai military government’s abuse of power.

The Thai authorities have plunged to fresh depths in restricting people’s freedoms of expression. After imprisoning people for what they say both online and offline, and hounding critics into exile, they want to cut people off from each other altogether.

Meanwhile, the country's prime minister reportedly ordered government ministries to go after other Internet users in other countries who often “insult” the royal family.