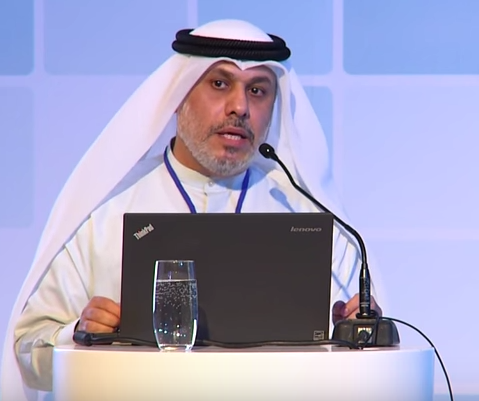 Nasser Bin Ghaith during a panel discussion on the “geopolitical significance of the Arab Gulf Region” in December 2014. Screenshot from YouTube video posted by the Arab Center for Research and Policy Studies.

UAE academic and economist Nasser Bin Ghaith has been on hunger strike since 2 April to protest his sentencing to ten years in jail for online posts that were deemed “offensive” to the state. Bin Ghaith announced his strike in a open letter, which was widely shared by human rights groups.

Bin Ghaith was arrested in August 2015. Following his arrest, UAE authorities held him incommunicado for nine months. During a first court appearance on 4 April last year, he told the judge that he was beaten and deprived of sleep while in detention.

On 29 March 2017, the Federal Appeal Court in Abu Dhabi convicted him on a number of charges that include publishing online posts that were “offensive to the state’s symbols and values, its internal and foreign policies and its relations with an Arab state” and sentenced him to ten years in jail. These posts included tweets in which Bin Ghaith sharply criticized Egyptian authorities for their 2013 crackdown on protesters gathering at Rabaa square against the military's removal of elected president Muhammad Morsi. The crackdown resulted in more than 800 civilian casualties, according to Human Rights Watch.

Bin Ghaith was also convicted of “publishing false information” for stating on Twitter that he had not been granted a fair trial in a previous case known as the “UAE 5″ in which he and four other activists were arrested and jailed for calling for democratic reforms in the UAE. The activists spent nearly nine months in jail before they were released in late November 2011, after receiving a presidential pardon.

Though he can appeal his sentence within 30 days before the State Security Chamber of the Federal Supreme Court, Bin Ghaith has decided not to do so. Appealing the verdict “will change nothing but to give legitimacy to the court’s political order,” he stated in his letter from prison. Instead, Bin Ghaith has gone on hunger strike to demand his unconditional release.

I insist on my innocence and I deny all the charges against me. I feel really sad and depressed of the fact of being unfairly tried by my own people and in my own country which is proclaimed to be the land of tolerance and happiness.

Despite his health problems, Nasser bin Ghaith continues his #HungerStrike for 22 days running protesting his unfair imprisonment in #UAE pic.twitter.com/FUTDl1h4zQ

Bin Gaith's health was already at risk before he began his hunger strike. Earlier this year, several human rights groups including the Gulf Center for Human Rights (GC4HR), the International Campaign for Freedom in the UAE, the International Centre for Justice and Human Rights, and the Emirates Center for Human Rights expressed concerns about his deteriorating health situation. According to the GC4HR, Emirati authorities were not doing enough to provide him with needed medical treatment. It took weeks before Bin Ghaith had access to a doctor to examine pain in his teeth, and the prison's authorities have not been consistent in providing him with medicine for his blood pressure. But for Bin Ghaith: “I have no choice but to go on hunger strike to restore my stolen freedom”.

The graphic below, created by Visualizing Impact, outlines the experience of a person on hunger strike over time, drawing on research from Forensic Science International, the Journal of the American Medical Association and the British Medical Journal.